Love Inc.: Startups Make Breaking Up Easier to Do

By Brian Patrick Eha June 24, 2013
Opinions expressed by Entrepreneur contributors are their own.

Michelle Crosby's passion for fixing divorce began when she was 9 years old. "My parents had one of those War of the Roses divorces," she says. They split when she was 3 years old, but their ongoing disputes led to 15 court appearances over the span of her childhood.

Their conflict provided the catalyst for Crosby's career as a family attorney. But over time, she saw herself contributing to the problematic system that had so profoundly affected her childhood, and knew something had to change. "That 9-year-old really started screaming, 'No, no, no, we were supposed to fix this, and you're becoming part of it,'" she says.

Crosby resigned from the law firm and in 2009 launched Wevorce, a technology platform that aims to make divorces amicable. Although divorce is a legal process, she says, it is fundamentally a personal and emotional issue that can often be solved without a legal battle.

While heartbreak has long been a lucrative business for attorneys, only in recent years have startups begun staking their own claim in the post-love period of canceled weddings, called-off engagements and, of course, divorces. More than 1 million U.S. couples get divorced each year, according to the U.S. Census Bureau.

Related: Why Rupert Murdoch's Divorce Is a Wakeup Call for Business Owners

Wevorce walks couples through a six-step process that culminates in a clean break. Each family is assigned three local experts -- an attorney, family counselor and accountant. Along the way, the Wevorce software eliminates redundancies as data, once collected, automatically populate all required documents.

Following a four-month trial run at startup accelerator Y Combinator, the startup is retooling and building its network of experts for a nationwide launch. Wevorce, based in San Francisco, currently offers its service in California, Washington, Oregon, Idaho and North Carolina. "Right now we have more demand than we can possibly meet," says Crosby, who declined to disclose revenues for the 6-employee company. More than 100 families have used Wevorce so far, and only one ended up in court, she says. 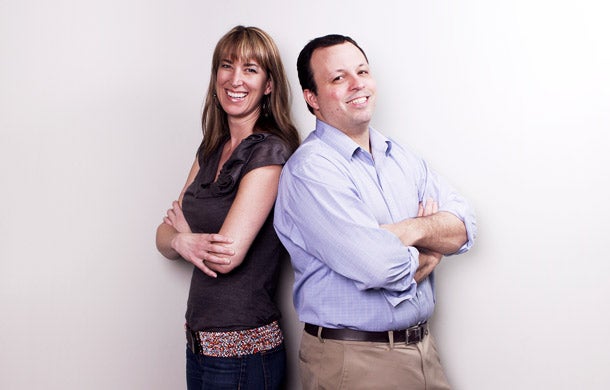 Michelle Crosby stands with Jeff Reynolds, her partner in Wevorce, a technology platform that aims to eliminate the need for lengthy courtroom divorces.
Image credit: Wevorce

Crosby estimates that divorce professionals spend only 20 percent of the time on a Wevorce case that they would spend on a traditional divorce. Clients pay between $3,500 and $15,000 per family to use the service, and Crosby plans to open up a second revenue stream this fall by licensing the Wevorce software to lawyers, counselors and accountants -- professionals who currently work for the company as independent contractors. For clients, the cost is not easily comparable to a standard divorce, which can vary from $5,000 to more than $100,000, depending on how contentious it becomes, particularly if children are involved, says Sari Friedman, a Garden City, N.Y. divorce attorney who runs her own firm.

Divorced people often find themselves at odds with their exes over child-care and other issues, Friedman says. According to her, the chief pain point for divorced couples is lack of trust, especially when it comes to raising kids.

To reduce this distrust, Two Happy Homes launched in 2012 as a safe space for amicable co-parenting. Founder Traci Whitney, an independent graphic designer in Hartford, Conn., and divorced mother of three young children, launched the website after failing to find adequate tools for communicating with her ex-husband. "It's sort of an untapped market," Whitney says. "There is competition, but nobody has taken the lead on it yet."

Related: How to Ask Your Partner for a Prenup

Two Happy Homes offers a shared calendar for children's activities, a finances section to track expenses and online payments, a medical section for medication and doctor information, a joint-contacts list and a community section that consists of a members' forum and advice articles written by experts. Users can also share documents and pictures.

The website keeps a permanent record of all parental dialogue. This record can be accessed by lawyers and other professionals as needed. "Some higher-conflict couples need to have a record of communications," Whitney says. The limited basic service is free of charge, while for $15 a month you get access to unlimited contacts and document sharing, plus the medical section and the ability to pay your expenses through PayPal.

"There is no talk of courts or custody battles. People that are co-parenting don't need to be reminded every day that they're divorced, they just need a place to organize their hectic lives that is friendly and useful," Whitney says. To be sure, some exes may be too far gone to work together. But Friedman says a system like the one Two Happy Homes offers could lead to a better co-parenting arrangement for others.

Whitney's solo venture has not yet turned a profit, since all revenue -- less than $10,000 so far -- is going to maintain the site. According to her, after a little over a year the site currently has about 2,500 users -- 1,250 couples -- and is adding users every day. In the near future, Whitney hopes to create a mobile app. She is in talks with angel investors, she says, and would like to raise about $500,000 to develop the app and begin a major marketing push.

Along with these divorce-centered businesses are a small crop of startups addressing the problems surrounding called-off engagements and canceled weddings. I Do Now I Don't is an online discount marketplace for engagement rings and wedding dresses from couples who never made it down the aisle. Founded in 2007 by former market researcher Josh Opperman, the company's monthly sales are about $200,000.

Another startup helping the "disengaged" is Bridal Brokerage. Would-be brides and grooms who call off their wedding can sell their wedding package at a discount through the Bridal Brokerage website. Another couple gets the day of their dreams, while the seller recoups some of the cost of flowers, caterers, photographers, location deposits and more.

These startups are banking on the millions of lovelorn searching for ways to ease the pain of heartbreak. "We're really trying to change a very big conversation in this country," Crosby says. "If we can make this easier for the professionals and the client, why wouldn't you choose to settle things amicably? Why would you fight it out in court?"

Related: 7 Qualities to Look for in a Lawyer