By Elaine Glusac December 6, 2013
Opinions expressed by Entrepreneur contributors are their own.

When he recently decided to open a west coast branch of his digital marketing agency SEER Interactive, Philadelphia-based owner Wil Reynolds knew the three-month stay in San Diego meant temporarily relocating his family, including his six-year-old lab-pit-bull mix Coltrane. Rather than flying the dog in cargo, Reynolds did the drive cross-country, using GPS to locate a baseball field every four to five hours where the dog could chase fly balls.

“It’s important to me culturally to feel close to my team,” he said. “We’re planning to do this again next year. We’ll probably do this every year.”

Reynolds is among the doting working doggie dads taking their pets on the road for business. While an exact number of pets on business trips isn’t tracked, the American Pet Products Association says that almost a quarter of pet owners take their dog along when traveling for two nights or more. (Dogs are the most well-traveled species; only two percent of cat owners took Fluffy along).

These bonds are big business with more than $53 million in pet expenditures according to the APPA. The travel industry has taken notice, making things easier for ‘treps to take their pets on the road. In 2012, the American Hotel & Lodging Association found that 61 percent of properties permitted pets, up from 52 percent in 2010. Airports from Boston to Burbank offer pet relief areas and some, including Dallas Fort Worth and Washington Dulles, host pet hotels.

Though pet travel has gained traction in the past decade, it can still be a challenge. Melissa Halliburton ran a Boston-based coupon company in 2002 when she encountered a lack of resources for finding hotels that would take her and Rocco, her Chihuahua-Jack Russell mix. That frustration begat BringFido.com, a web site she launched in 2005 to identify and book dog-friendly hotels. It initially listed 10,000 US hotels; now that figure has nearly doubled to 19,000 domestically, for a total of 50,000 globally, but still a fraction of available hotels. Today, about 20 percent of the web site’s users are business travelers. 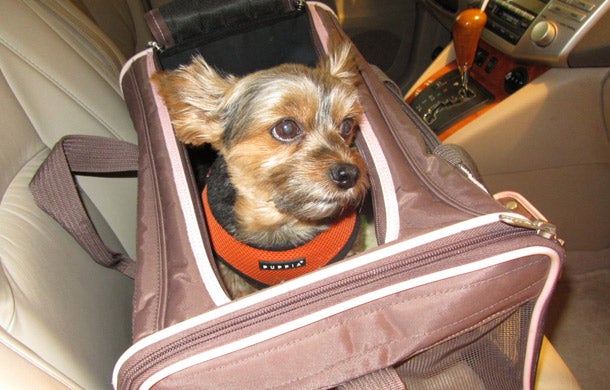 Business travel with pets means being prepared for the unexpected, as Teddy, a Yorkshire Terrier, has taught his owner Terri Slater.
Image credit: Terri Slater

Having a furry travel companion can even make financial sense, depending on the trip. A one-way plane ticket might start at $125 with many major carriers, but boarding can range from $30-$50 nightly, a fee that adds up for long jaunts. “Economically, it’s usually cheaper than boarding,” said Halliburton.

Of course, traveling with animals means planning for the unexpected. Independent Florida-based publicist Terri Slater and her husband realized their Yorkshire terrier Teddy needed to go outside just before boarding a flight at New York’s Kennedy airport. “I’m standing already through security and waiting with a panicked look on my face,” said Slater, who eventually made the flight and continues to travel with Teddy monthly for work.

In the same way that parents tolerate the trouble of taking the kids on a business trip, pet parents seem willing to cope with the challenges of calming pets spooked by strange environments, packing a pet carrier and organizing pet care if meetings prohibit bringing an animal. Most say the rewards outweigh the challenges, which include planning around “comfort stops.” Pets who travel for work develop their own relationships with clients. In New York, Melanie Brandman runs a public relations agency and frequently takes her bulldog Adelaide on regional road trips to the Hamptons and coastal Maryland. “I do have clients who say, ‘Where’s your dog?’” she said. “She has a huge fan base with clients.”

For others, a dog is both a companion and divining rod. LA-based founder of YogaFit, a yoga training school, Beth Shaw travels with her malti-poo rescue dog once a month on business. “For me, there’s something really comforting about traveling with a dog,” she said. “Most people are dog-friendly. I’m always concerned about those who aren’t.”

And bringing your best friend can make life on the road a little less lonely – in more ways than one. Adds Halliburton, “If you’re single, it’s a lot easier to meet people. It’s a real ice breaker. If you’re sitting alone at a restaurant, every single person who passes will want to pet your dog.”