New Study Details Who Is Using Social Media and When

When building a company, an entrepreneur knows one of the first questions he or she is going to be asked is "Who is your customer?" Social media can help get the word out, but how do you know where your audience is going to be?

Well, the Pew Research Center may be able to shed some light. Under its Internet and American Life Project, the Washington, D.C.,-based nonprofit released a report that took stock of the year in social media and the findings show that we're all, unsurprisingly, connecting with each other online in a big way, with 73 percent of "online adults" using social media.

While Facebook continues to dominate the space with 71 percent of adults using it, 42 percent of this audience is using multiple networks. Pew's data comes from phone interviews with 1,801 internet users, age 18 and older, conducted by Princeton Survey Research Associates International in August and September.

But with the increase in social-media network choices - everything from Twitter to Pinterest and Instagram - and diversification occurring, determining where to invest your time and resources can be tricky.

Fortunately, Pew provides a demographic breakdown of exactly who is using these social networking sites and how often.

Below is a quick recap. If you want the more in-depth finding, head on over to Pew. 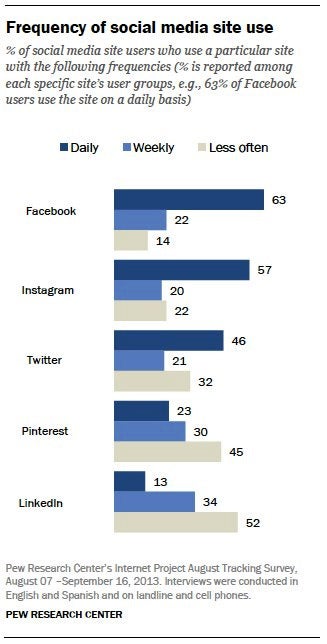 Related: The 10 Most Overused Buzzwords on LinkedIn (Infographic)