Mt. Gox could be on the verge of vanishing into thin air, much like all of the troubled exchange’s tweets suddenly did just hours ago. The company’s tweets mysteriously went extinct just after Mark Karpelès, CEO of the now chronically crippled trading post, resigned from the Bitcoin Foundation’s board of directors over the weekend.

The Tokyo-based Bitcoin Foundation, a trade organization that “standardizes, protects and promotes” the use of the digital currency, unceremoniously went public with Karpelès’ resignation on its blog on Sunday, shortly after The Wall Street Journal broke the news.

“Effective immediately, Mt. Gox has submitted their resignation from the board of directors. We are grateful for their early and valuable contributions as a founding member in launching the Bitcoin Foundation. MtGox Co. Ltd. (Japan) held one of the three elected industry member seats. Further details, including election procedures, will be forthcoming.” 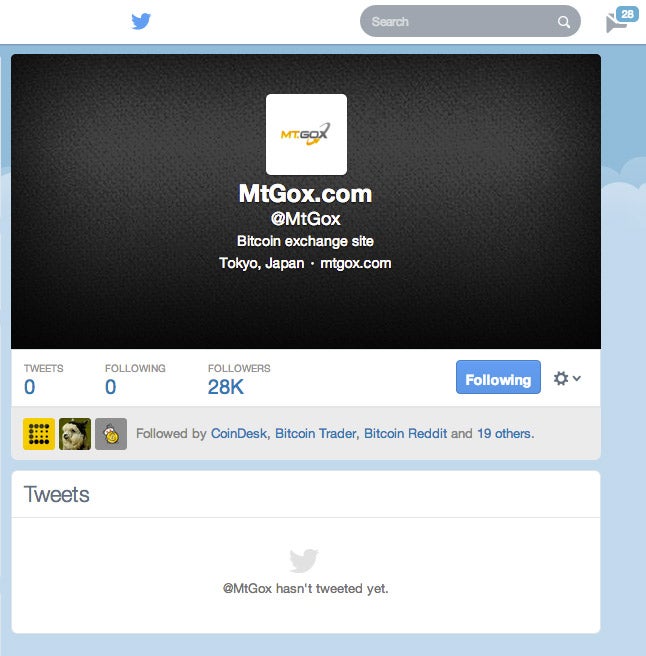 Mt. Gox did not immediately respond to Entrepreneur.com's request for comment regarding the resignation of Karpelès, whose own Twitter feed appears to be going, if not somewhat sparingly, despite his company’s now empty one.

Karpelès’ withdrawal of his board seat comes on the heels of Mt. Gox’s recent falling out with the foundation over how Bitcoin wallet transactions are handled. The Tokyo-headquartered exchange claims its recent transaction malleability woes are due to a “fundamental flaw” in the Bitcoin protocol that it reportedly put pressure on the foundation to confront. The foundation fired back, saying that Mt. Gox’s issues stem from its own “wallet, lack of flexibility and customer support,” according to ZDNet.

Just last week Mt. Gox, once the world’s largest Bitcoin exchange, issued an apology for the freeze of external Bitcoin transfers due to what it called a “massive and concerted” denial-of-service attack. It has since attempted to assuage growing customer frustration, stating that withdrawals would resume again soon, though at a slower, somewhat limited pace to safeguard against future threats.

Another prominent Bitcoin Foundation member, Charles Shrem, CEO of BitInstant, stepped down from the organization’s board last month after being arrested on money laundering charges involving allegedly plotting to hawk some $1 million in Bitcoins to users of Silk Road, an online black market.

As of 12:24 a.m. EST, Bitcoin was trading at a $176.01 on Mt. Gox. Meanwhile, on the the new Winklevoss twins’ brand new global Bitcoin pricing index, Winkdex, the volatile virtual currency is riding high at nearly $572.98.

Bitcoin Could Cost Upwards of $300,000, But Its Fall Will Be Brutal, Cryptocurrency Expert Warns

Canaan Stock May Be an Alternative Way to Trade Bitcoin