Jobs in the Aviation Industry Are on the Rise


To the naked eye, the gray windowless hangars next to Piedmont Triad International airport in Greensboro, N.C., may appear to be nothing out of the ordinary, but TIMCO Aviation wants students as young as fourth grade to see it differently. The company wants them to see it as a place where they can one day work.

"Being around aircraft is fun, so we do like to go to elementary schools and get people interested in aviation," said Kip Blakely, TIMCO's vice president of industry and government relations.

The company has reason to be reaching out to students as young as 10--the aviation industry is booming. Boeing estimates global cargo and passenger traffic will expand 5 percent annually through 2032. To accommodate the growth, 20,930 aircraft will be added to the world's fleet. For companies like TIMCO, a unit of Hong Kong-based HAECO, this means it will need to add trained and certified workers for years, just as 30 percent to 40 percent of its workforce is preparing to retire.

"We have major plans to expand," said Blakely, but finding the 400 technicians to staff the two new hangars TIMCO wants to build is the hard part. "That is really a headwind to our expansion."

TIMCO is not alone. Even as the economy added 175,000 new jobs in February with the unemployment rate at 6.7 percent, a 2013 survey by Manpower found 38 percent of U.S. companies say a lack of skilled talent is impeding their growth.

TIMCO has 1,800 workers at the Greensboro plant, and Blakely estimates the firm will be hiring 350 new workers each year, for the next several years. To ensure a steady supply of trained employees, it is partnering with high schools, a local community college and a national program retraining adults in aviation.

So while outreach to young children is important, the real recruiting efforts begin in middle school. Interested eighth-graders can apply to attend Greensboro's Andrews Aviation Academy, one of only 50 high school aviation programs in the United States. 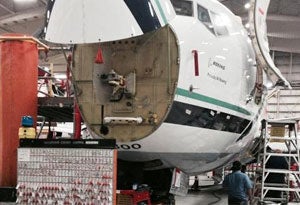 High school junior Bruno Cacace signed up, and in addition to the courses he has taken in drafting, physics and aviation fundamentals, he is shadowing an engineer at TIMCO this year. The floppy-haired 16-year-old said his experience gave him a new perspective on what being an engineer entails.

Workers servicing a plane at the TIMCO hangar in Greensboro, N.C.

"Actually seeing the environment that I'm going to be in helps because I can see myself working at the computers and working on different projects," he said.

A future at TIMCO may be five years off though, since Cacace plans to go to college and study engineering. In the near term, TIMCO is working with Guilford Technical Community College on a two-year program where students are trained in the skills they need to become FAA certified technicians.

"At the end of each class, we debrief them (TIMCO) to make sure that the students are meeting their needs and meeting the standards they have," said Audrey Floyd, Guilford's department chairwoman of aviation management.

She said Guilford has been working with TIMCO for about five years to create a pipeline to meet the needs of the industry.

Daniel Wade, a 28-year-old Guilford graduate, has been working as a technician at TIMCO for over a year now and is happy to tell you he has already received a raise. He works in one of TIMCO's four hangars, which can service 19 aircraft at a time. Wade will work on 737s, 757s, 767s, 777s or a KC-10s. Each plane takes an average of 30 days to service.

"I can change oil filters. I lube cables, remove and replace parts, do small troubleshooting, electrical stuff," Wade said. "Sometimes I do interiors, install chairs, panels, I do a little bit of everything here." 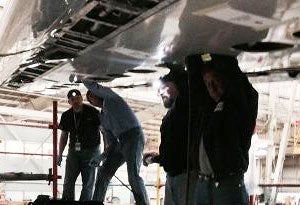 Wade has an Airframe and Power Plant certification from the FAA. This allows him to work on the planes when they come in for required maintenance. The work essentially involves taking the plane apart, inspecting its parts, fixing or replacing the one that are broken or old, and putting it back together.

Blakely said new technicians like Wade can earn up to $30,000 in their first year with overtime, and will receive benefits like health insurance and a 401(k).

An experienced technican could earn more than double that first year paycheck, depending on additional certifications they might receive to work on specific parts of the plane like the engine or frame.

For Wade, the most important part of the job is making sure everything he is doing is correct.

"I know I have people's lives in my hand every time I touch this plane," he said.

Wade still touches it under the watchful eye of a mentor at TIMCO. While certified, he will spend three years in what is basically an apprenticeship with one of TIMCO's veteran technicians. Blakely points out there are no robotics on the floor of these hangars--the work must be done by a human hand. A technician has to read the FAA's worksheet, do the assigned task, sign off on it and have it approved by a TIMCO inspector and others from the FAA and/or an airline.

Many long-time TIMCO workers are military veterans who entered the private workforce after the Vietnam War. Now as troops come home from Afghanistan and Iraq, TIMCO is hoping once again to tap this rich vein of workers.

"They've got about an 80 percent employment base with veterans, and as it (TIMCO) grows they are bringing in more and more employees from the veteran base," said Jesse Fletcher, TIMCO's military recruiter.

Seasoned workers from the private workforce are welcome, too. TIMCO and Guilford have been working on a program that retrains adults with a grant from the National Aviation Consortium.

One of those adults is a recent TIMCO hire, Amy Essex. The 46-year-old mother of three boys formerly worked at a mental health services firm. Unemployed for seven months, she was selected for the program in July and has since passed her online courses and a mechanical test she said was one of the hardest things she has ever done.

"The learning curve is so high, the expectations are very high," she said, adding everything she did had to be perfect.

Now, she will be working "off wing." She can assist other technicians but will not work directly on the plane. Those jobs are reserved for certified technicians. Essex plans to take the classes she needs to take to get certified, as she is working at TIMCO.

"This is the first step," she said. "Many good things to happen."