Inspired or Insane: This 28-Year-Old Vows to Launch a New Business Every Week for One Year

For most aspiring business minds, conceiving a viable enterprise is the project of a lifetime. For 28-year-old Colin Grussing, it’s about to become a weekly routine.

With a seemingly time-bending initiative entitled 52businesses that is sure to intrigue dreamers and skeptics alike, Grussing and a small team will set out to create one new business each week for one year.

Why? To demystify the process of launching an early-stage startup, says Grussing -- a Yale graduate, serial entrepreneur and former Shark Tank contestant from New Orleans. As lofty as it sounds, “We want to encourage people to responsibly pursue their ideas, and ultimately contribute to a stronger, more resilient economy,” he said.

If the premise doesn’t sound brazen enough, here’s more: the team of three employees and five interns will base their operations out of a retrofitted cerulean school bus from the 80s, which they have lovingly nicknamed ‘Bob’ (Business Operations Bus.)

And the entire experiment will be documented through social media -- on blogs, podcasts, webisodes, Facebook, Twitter and more.

Though they will have to be deployed at lightning speed, Grussing says he’s already chock-full of business ideas. One venture is a mobile yoga studio. Another, Apocalypse Camp, is a survival course for adults to be held within a derelict jailhouse, where proficiencies such as siphoning gas, hotwiring cars and shooting guns will be taught.

Related: 5 'Bad' Millennial Traits That Are Actually Good for Entrepreneurs

“In terms of overall planning, we always want to stay four weeks ahead of the curve -- while still maintaining the authentic sense that we’re starting fresh every Monday,” Grussing said. 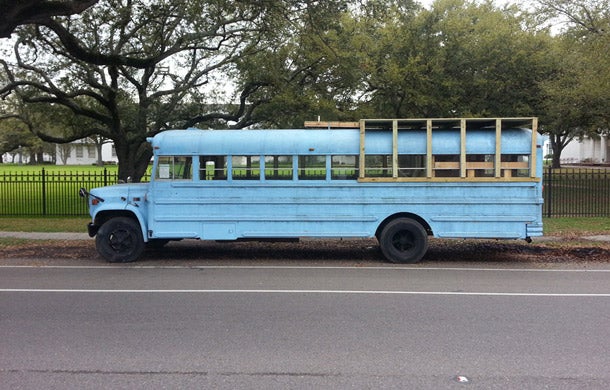 To judge the success of each venture, “we’re aiming to have proof of concept -- and in some cases, even profitability -- within seven days.” The team is targeting a success rate of 100 percent, he added, “though we’d be happy with seventy-five.”

But just how will each company subsist once its dedicated week has passed? Many can become automated, Grussing explained, while others will represent joint ventures or will have been developed from the outset with a specific manager in mind. Nevertheless, “we have a stake in each one,” he insisted. “These aren’t throwaways.”

And then, halfway through the process -- once the concept has proven itself, Grussing said -- 52businesses will open its doors to outside applicants in hopes of supercharging the dreams of fellow entrepreneurs.

If 52businesses sounds slightly harebrained, a glance at Grussing’s former endeavors helps to contextualize the undertaking.

After college, Grussing founded RootSuit -- a vendor of skin-tight spandex bodysuits that landed him on Shark Tank. Next, he created a dealership of motorcycle sidecars sourced from India. Though these endeavors bear little in common other than the impulsive passions of their inventor, each has turned a sizable profit.

At the age of 28, his businesses -- and a handful of strategic investments in real estate -- had earned Grussing enough passive income to retire, he said. This was a path he seriously considered before realizing that it was the entrepreneurial process that fueled him more so than the financial returns.

Acknowledging that none of his proposed businesses are conventional in any sense of the word, Grussing said his strength lies in creating quick cash flow in tandem with fun and meaningful experiences. “What I specialize in is bootstrapping an idea, turning it into cash and then adding it to my portfolio,” he said.

And for detractors who might snicker at those ideas -- or doubt Grussing’s seriousness of his purpose -- he has three simple words: “Just watch me.”

What Hollywood Can Teach Entrepreneurs About Life in the Spotlight

The Man Behind the 'Bible of Bro Culture'