Which Nation Has the Most Money-Smart Teens? Hint: It's Not the U.S.

By Kelli B. Grant July 10, 2014
This story originally appeared on CNBC

American teens may know the mall like the back of their hand, but their knowledge of financial topics such as saving, spending and investing is average at best.

The first large-scale international study on financial literacy among 15-year-olds came out on Wednesday, and the results are grim. Among the 18 countries in the Organization for Economic Cooperation and Development's assessment, the U.S. ranked at best eighth and at worst 12th, based on the range of scores from its 1,133 students tested. Globally, more than 29,000 students took the test.

"How do you feel when you get the 'also participated' ribbon?" said Ted Beck, president and chief executive for the National Endowment for Financial Education, in an interview with CNBC. "That's kind of where we are."

U.S. teens scored a mean 492 on the OECD test, eight points below the overall global mean of 500--and more than 100 points below first-ranked Shanghai-China's 603. (See chart below for a country-by-country ranking.) 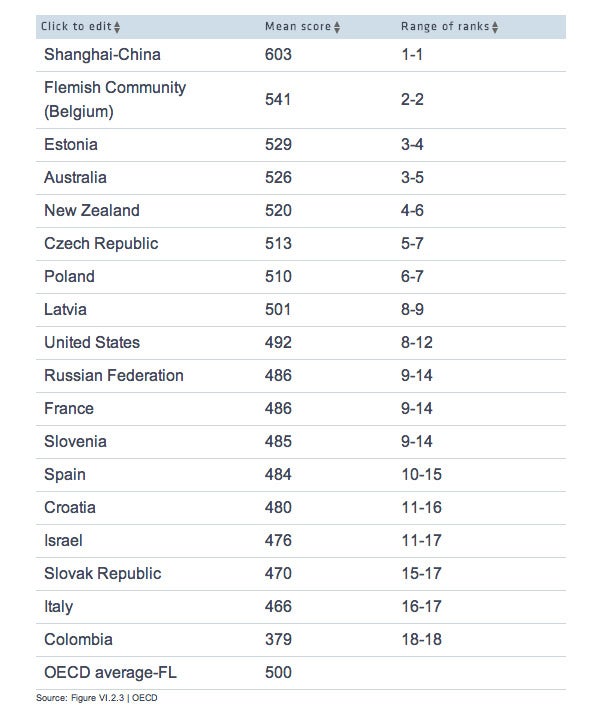 To put those scores in perspective, a student with baseline financial literacy skills--including the ability to apply the concept of value for money and identify relevant financial information on items such as invoices--would score somewhere in the range of 400 to 475. To be considered at the highest level of proficiency, students must score at least 625. Those top performers would be able to interpret complex financial documents and anticipate the consequences of each option available when making a financial decision.

Among U.S. teens, 9.4 percent were top performers, comparable to the 9.7 percent of all countries in the test. But more American students fell on the lowest end of the scale than in other nations:17.8 percent did not reach basic proficiency versus 15.3 percent globally.

Domestically, students who came from higher-income families, or had a parent in a skilled occupation (especially one in finance) tended to score higher, as did students who had their own bank account. A small bright spot: Girls had mean scores of just one point lower than boys, much less of a discrepancy than in other countries.

"This is an important test to see how much the students know, do they have this important skill?" said Annamaria Lusardi, a professor at George Washington University who is chairing the OECD group that designed the assessment, in a CNBC interview. "I think it shows there's a lot more to be done."

Financial products such as mortgages and credit cards are increasingly complex, and employers are putting more choices of retirement funding and health-care options in the hands of employees. Plus, today's 15-year-olds are just years away from potentially taking out student loans, a debt decision that could follow them for decades.

"It translates into real economic problems for the country," Seaton said.

A key commonality among countries whose teens scored better than the U.S. is education. New Zealand and Australia, for example, have both developed national financial literacy strategies with mandated education components. "Being proactive has really paid out for their young people," Lusardi said.

China's testing was limited to Shanghai students, a narrow scope Lusardi likened to the U.S. testing only students in Washington, D.C. Still, China and other Asian countries typically rank among the top five for other school subjects--and OECD data showed some positive correlation between financial literacy skills and high performance in mathematics and reading.

In Shanghai, "the mathematics scores are contributing to a high score in financial literacy," Michael Davidson, head of early childhood education and schools for OECD, told reporters in a webinar on the results.

The U.S. released its National Strategy for Financial Literacy in 2011, but educational components are relegated to the states. Seaton said only four states require high school students take a personal finance course to graduate and another 16 mandate some financial literacy components in classwork.

Even some of those mandated state programs aren't funded, Lusardi said. That leaves it to school districts to figure it out themselves, with varying success.

Nonprofits and private industry initiatives have stepped in help close the financial literacy gap, but their success is limited by their reach, Seaton said.

"It's difficult to get to the masses with evening and weekend programs," he said. "The major part is going to have to be the public schools, because that's where the kids are."

Davidson said it remains to be seen what kind of educational approach works best--one with a separate personal finance curriculum or one where personal finance issues are interwoven with other subjects such as math and English. Many of the countries surveyed have newly implemented their programs and strategies, so it's premature to expect to see results in the students' test performance.

"The question of, does financial education work or not, is too early to say," Davidson said. 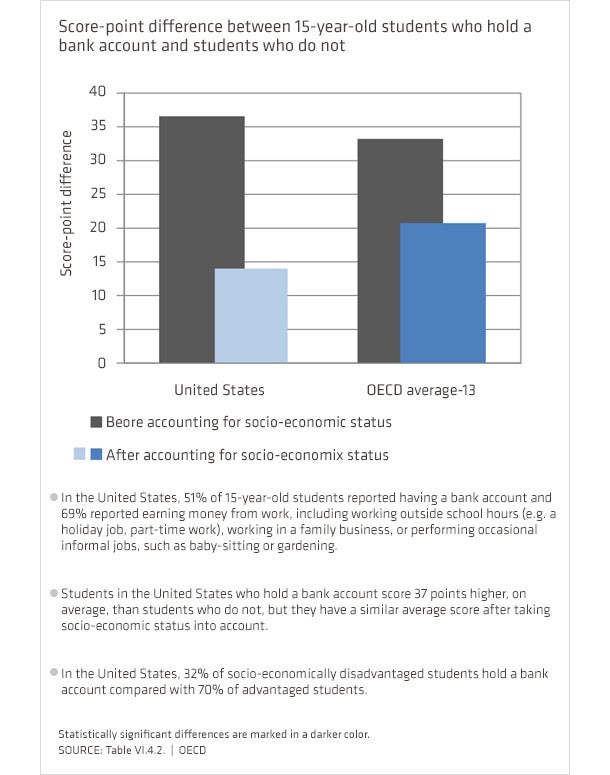 Until a more standardized system for financial literacy is put in place, it's largely on parents--and kids themselves--to boost their knowledge. A University of Arizona study on college students' financial behaviors found that three things help there: Parental involvement, taking a personal finance class and having a part-time job and other hands-on money experience.

"Talk to your kids about money," Beck said. "It's a continuous process."

Of course, you might be part of the problem. "Sometimes parents can't be the best teachers of financial literacy, because they don't know themselves," Lusardi said. Supplement with local programs and online resources, including Jump$tart, Money As You Grow and the AICPA's 360 Degrees of Financial Literacy.

Experts also advise pushing for more personal finance in the school curriculum, lobbying both your local schools for inclusion and area businesses for sponsorship or teacher training funds.

More than half of the U.S. teens tested have a bank account, and 69 percent reported earning money from work. While that hands-on experience didn't necessarily result in higher scores for all, it's a key component for learning.

"You have to understand the rules and the way things work, but you also need to develop the skills to make it effective," Seaton said. "Practice the financial literacy skills set of banking, checking, and use of a credit or debit card. The sooner [teens] learn how to actually deal with those things and develop that skill set, the better off they're going to be."