By Neil Patel October 9, 2014
This story originally appeared on KISSmetrics

Too often, doing social media can become a pain. This is especially true for startup environments, run by busy people with more "important" things to do than post on Twitter and check on Facebook engagement levels.

But we all know, deep down inside, that social media is important. And we know that we have to do it.

So we might as well figure out how to do more social media in less time and with less effort.

The following tactical methods have been proven to produce twice the amount of social media with only half of the effort. The great thing about this approach is that higher output on social media generally produces a greater level of engagement.

Here's how to do it.

When you create a social media schedule, you immediately reduce the level of consistent effort required throughout the day.

The inherent advantage of social media is also its disadvantage. True, you can keep your brand message and presence in front of people all the time, but this requires consistent output and daily effort.

When you unplug from one task to "quickly" post to social media, you're doing yourself a serious disservice.

The solution I'm proposing is to deal with your social media in a single session of unbroken concentration.

The scheduling approach has three components.

Constantly flitting in and out of social media is a huge drain on your time, effort, and mental energies. Scheduling -- whether it's scheduling your day, your posts, or your listening -- dramatically reduces the level of effort that you put into social media, while dramatically increasing your output.

One of the most important features of posting to social media is also the most time-consuming -- finding content to post.

The amount of time and effort that you pour into finding and posting can be reduced. I already showed you how the simple practice of scheduling will reduce that effort.

The system you choose is totally up to you, but let me provide a suggestion. I use Evernote along with the Evernote Chrome extension. In my Evernote folder, I can create a specific folder for things I want to collect and share later.

Whenever I come across something interesting to post on social media, all I do is click the Evernote button in my browser. 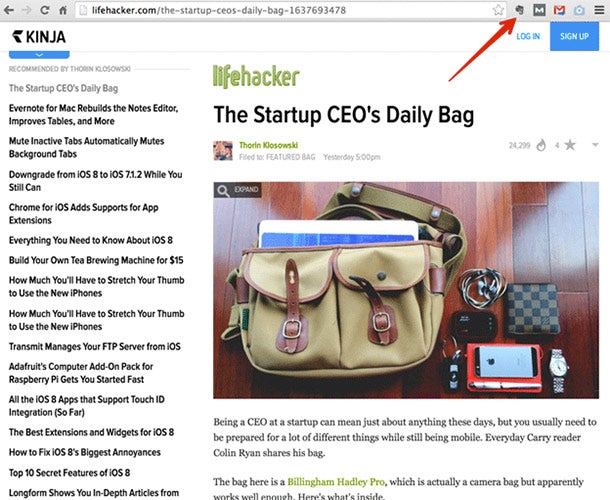 From there, I can adjust how I want this article to be saved for future reference. I'm putting it in a sub-folder of my social media folder called "Business Ideas." I'm saving the "Bookmark," not the entire article, and I'm tagging it with "social media." I've also added a quick note: "This would be a good one to post on Tuesday." 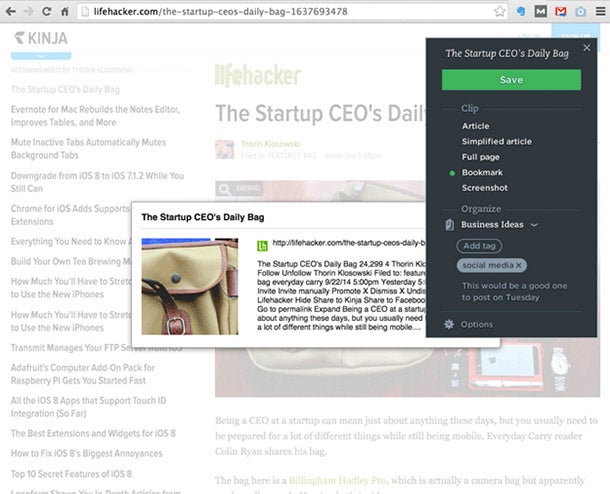 When I click "save," I now have this article saved in Evernote. When it's time to schedule my articles for posting, I simply open up the correct Evernote folder and go to my saved bookmark. 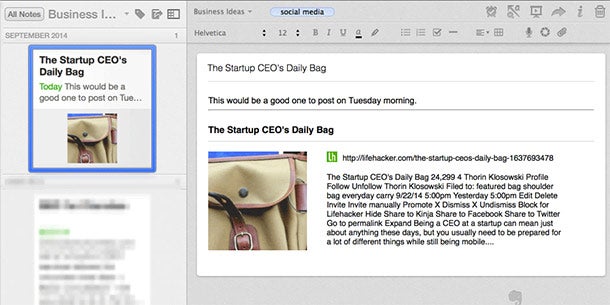 This is nothing more than a collection system. I'm simply taking the process of collecting content, and distilling it to a quick-and-easy process.

As I move throughout my day, checking emails, visiting websites, doing research, etc., I will come across interesting articles, studies, or websites that I'd like to share. All I do is click my Evernote extension, and I'm done. It's saved for the next day's scheduling session.

Another way to reduce your overall effort is to create a focused time for discovering great content.

Buffer has an article on "Always Have an Amazing Link to Share," in which they discuss some of the most effective places to find great content. This is a great starting point for discovering great links to share via social media.

You should also do some spadework to discover your own content. I suggest a technique in my Buffer article, that requires spending just thirty minutes to come up with content to post for several days.

This goes back to my whole thesis: With half the effort, you can produce double the content. You just have to be smart, scheduled, and intentional about it.

Here's the ultimate hack for less-effort/more-content. Share the same stuff more than once.

There's logic to back up this simple technique. Different people will see your different social media posts, depending on what time you post it.

So why not share the same thing twice? Or why not three times? Or more?

Can you get away with this? Absolutely, and there's nothing cheap about it at all.

Garrett Moon discussed how he recycles his posts, and even shows his schedule for doing it. 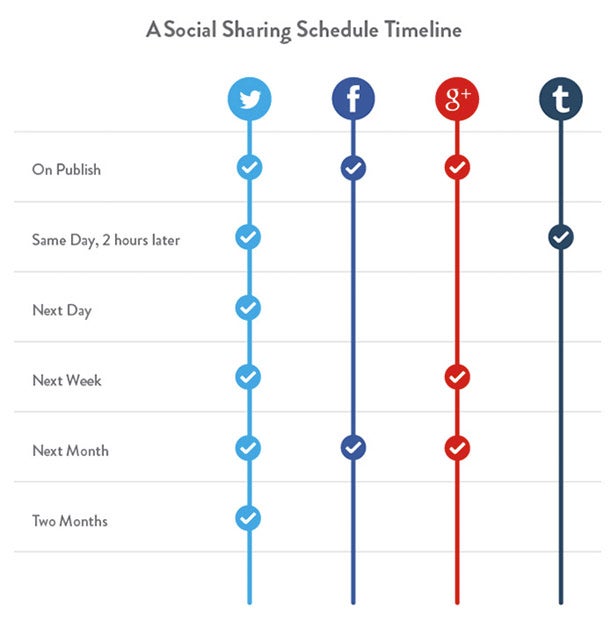 Moon has had zero complaints, higher interaction, more output, and even the possibility that some of the reshared content could go viral after several takes.

If you share your content more than once, you can get three or four times as much mileage from a single post than you would if you were only to post it once. Obviously, you'd need to jigger it a few times to make it unique each time, but the overall principle is incredibly effort-saving and traffic-increasing.

Tips, tricks and hacks can make social media more effective than it is. But let's be careful not to view social media as a waste of time. Although social media can be a black hole of time-wasting (if you do it wrong), it is actually an investment in your overall business marketing efforts.

Increasing your output on social media while you reduce your effort is simply a matter of being smart and productive.

What ways have you discovered to reduce your social media effort while improving your output?