By Scott Shane February 25, 2015
Opinions expressed by Entrepreneur contributors are their own.

Many pundits argue that countries with institutions and policies that encourage economic competitiveness – that is, places with fewer regulations, stronger rule of law, better infrastructure, more stable macro economies, better health and education systems, and more efficient markets – have more entrepreneurial activity. While it is intuitively appealing to think that better infrastructure, legal systems and markets will encourage more people to start companies, recent analysis by the World Economic Forum and the Global Entrepreneurship Monitor cast doubt on this simple competitiveness-entrepreneurship relationship.

For 35 years, the World Economic Forum has evaluated the competitiveness of different national economies, using a comprehensive evaluation scheme that looks at many dimensions of a country’s economy. Recently, researchers compared these national competitiveness scores with levels of entrepreneurship in 44 countries over the 2009 to 2014 period, drawing on data from the GEM’s yearly evaluation of entrepreneurship.  (The GEM surveys a representative sample of the adult-age population in a wide range of countries to assess attitudes and actions toward new business creation and uses the results to create country-level measures of entrepreneurial activity.)

The striking inverse relationship between competitiveness and entrepreneurship is shown clearly in one of the figures in their report, which I have reproduced below.  The more competitive an economy, the smaller the percentage of the working-age population starting or running new businesses. 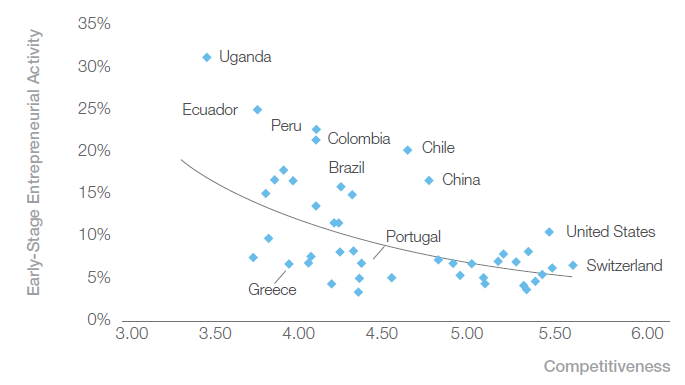 The results on competitiveness are consistent with analysis conducted by the Gallup Organization that I described in an earlier column. The research organization’s analysis showed that the per-capita gross domestic product was negatively correlated with the self-employed fraction of the labor force in 135 countries.  In my column about that study, I explained that “rates of entrepreneurship are negatively related to growth in societal wealth because rising incomes make possible more lucrative employment opportunities than running one’s own business.  In poorer places, where fewer high-paying jobs working for someone else exist, many people turn to entrepreneurship to earn a living.  Statistically, this pattern means we see in a higher fraction of people working for themselves in poorer places.”

Both the Gallup analysis and the WEF/GEM study point to a similar pattern about entrepreneurship that many elected officials miss, causing them to formulate bad public policy toward entrepreneurship.  Policymakers often assume that entrepreneurship is often people’s first choice occupation. But, in reality, it is often a back-up option. As a result, economies with less entrepreneurial activity tend to be more competitive and have faster economic growth.

Why Every Entrepreneur Should Study the Austrian School of Economics

There are No Shortcuts to Strengthening the Economy. It's a Long Game.

An Ant Colony Is the Perfect Metaphor for the Economy. Here's What Else You Need to Know.