Why the Starbucks 'Race Together' Campaign Is Bad for Business

Starbucks' new campaign to start conversations about race is worse than a band-aid solution – it’s one that could actively hurt employees and business.

On Monday, Starbucks announced the launch of the "Race Together" initiative, intended to encourage discussion of race in the U.S. As a part of the initiative, employees have begun writing "Race Together" on Starbucks cups, prompting customers to engage in conversations on race relations. Additionally, workers are being encouraged to engage customers through Race Together stickers and a special USA Today newspaper section that will arrive in stores later this week.

The company, led by CEO Howard Schultz, has been discussing race and related issues internally for months. The efforts began with an impromptu all-company meeting of Starbucks Support Center employees in December, and have continued with open forums in Oakland, Los Angeles, St. Louis and Chicago. Starbucks claims that, in these forums, employees said that they wanted to begin conversations with customers to encourage "greater understanding, empathy and compassion toward one another." 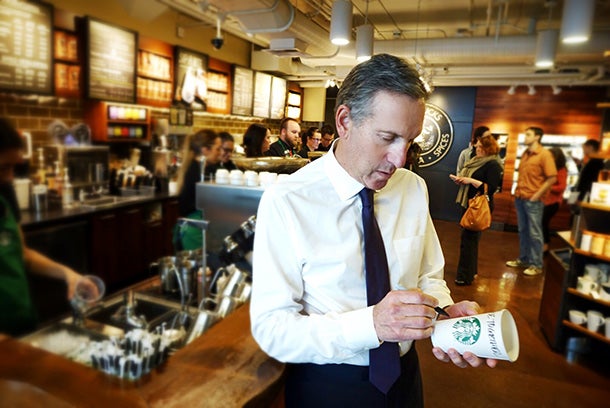 However, the practical issues of beginning these conversations with customers may be more than Starbucks is equipped to handle. Starbucks is trying to reaffirm its position as a "third place" with the campaign – somewhere outside of home and work that people meet and gather for thoughtful discussion. At the same time, Starbucks is now also a go-to for customers getting coffee on the run. Currently, a customer trying to vocalize a complicated order can slow down the line and annoy others waiting. Can you imagine the holdup associated with attempting to have a nuanced and expansive discussion of racism in America?

Additionally, while Starbucks says that partners inspired Race Together, it is difficult to imagine that employees across the board have the training – or patience – necessary to orchestrate these discussions. Putting this immense task on workers, even if it is voluntary, is taxing and unfair. Customers sue restaurants and attack employees over problems as inconsequential as order mix-ups. With hundreds of customers served at a single Starbucks every day, it's easy to imagine employees suddenly dealing with a slew of ignorant, racist or violent reactions – or individual baristas making ignorant or racist comments themselves.

Tone-deaf and self-aggrandizing aspects of Race Together haven't helped in establishing a strong base for employees to build on. Starbucks' press photos for the event appear to feature only white employees. The press release on Race Together bizarrely leads with the subheading "It began with one voice," painting Howard Schultz as a visionary progressive for daring to discuss race – something others, especially people of color, haven't exactly been silent on in recent months or the last couple centuries.

In the past, Starbucks' political activism, helmed by Schultz, has been mostly applauded, especially by like-minded customers. Schultz built up a reputation as a progressive and level-headed businessman on issues such as gun-control, gay marriage and the government shut down. On all those issues, Schultz has taken a firm – but not radical – stance and at times even provided concrete solutions.

However, on the issue of race, Schultz seems unwilling to take a stance other than acknowledging the need for discussion due to unnamed events sparking "racial unrest" in Ferguson, Mo., New York City and Oakland. In doing so, Starbucks attempts to retain its progressive reputation, while unloading much of the actual effort on employees working on the individual shop level.

“We at Starbucks should be willing to talk about these issues in America," Schultz said in a statement on Race Together. "Not to point fingers or to place blame, and not because we have answers, but because staying silent is not who we are."

Obviously, it's unlikely that a coffee chain is going to directly tackle racism in the U.S. However, Race Together goes beyond offering a weak solution – it shifts the responsibility for finding a resolution to employees suddenly tasked with a role that was never in their job description. Ethics aside, that's just bad business.

Related: With New Roastery, Starbucks Wants to be the 'Willy Wonka of Coffee'

How Howard Schultz Turned an Entry-Level Sales Job Into a Coffee Empire – And a Net Worth of $5.7 Billion

This Is the Moment to Start Your Business