This Is What It's Like to Ride in a Driverless Car

I felt a bit uneasy as a Mercedes-Benz self-driving car chauffeured me and my fellow passengers around an abandoned military airfield. No one was watching the road.

A computer ably steered the car around in gentle loops and, presumably, would have stopped if another car careened in our path. (In fact, the tarmac was closed to traffic.) But I felt unnerved, particularly after the Mercedes “driver” and I did what would be unthinkable in a normal car: We swiveled our seats to face backwards.

I couldn’t help myself from occasionally looking over my shoulder to check what lay ahead.

Welcome to the future, at least as envisioned by Mercedes and its team of futurists who have built a sci-fi car that is intended to reflect what driving will be like in 2030. What they came up with was a plush cabin filled with touch screens and an autopilot who never tires.

Mercedes is trying to show that it has the tech know-how to succeed in the future. Rival automakers like Audi, Nissan, and Ford, along with interlopers like Google and Tesla, are all pushing the envelope as they experiment with a new generation of vehicles that operate autonomously and, in some cases, have radically different designs.

On Tuesday, Mercedes invited a couple dozen other journalists to ride in its electric prototype, the F 015. The German automaker had premiered the design at the Consumer Electronics Show in Las Vegas earlier this year, but had yet to let more than a just handful of outsiders hitch a ride. The car, of course, is impossibly sleek and metallic, an apparent requirement for visionary car designs. The body is elongated with the wheels spaced unusually far apart to allow for more room inside the cabin.

The ride started with Peter Lehmann, the Mercedes engineer who helped create the car, tapping a smartphone app to summon the vehicle from a pseudo-garage nearby that was built for the occasion at the former Alameda Naval Air Station, located across the bay from San Francisco. The car woke from its nap and made a slow arc to where we were waiting. As we approached, a female’s voice rang out from the car to say “Please go ahead,” a signal that it was safe to pass in front.

Using sensors, the car had detected that we were nearby and automatically started slowly opening the car’s four bay doors. I soon found myself sitting in a luxurious and comfortable white leather seat reminiscent of the style found in airline cockpits. (Money will be of no object in the future, at least in Mercedes’ vision.)

With Lehmann in the “conductor’s” chair, I prepared mentally for the ride. Would it feel odd? Of course, I considered the possibility of a crash. But they’ve rigorously tested the system, right? 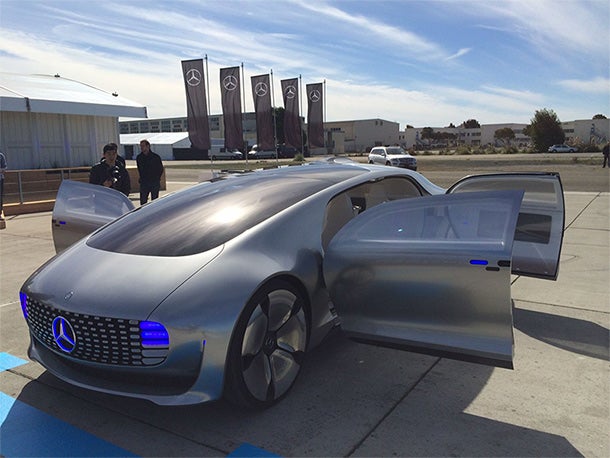 After buckling our seat belts, and with little fanfare, the car started to slowly roll across the pavement. Lehmann never touched the tiny steering wheel, which seemed like an afterthought, or used the gas and brake peddles. I felt like I was on an amusement park ride as the car made arcs across the vast expanse of open pavement. After we made a few loops, Lehmann pressed a button on the side of the seat to swivel his chair to face backwards and suggested I do the same.

This is the future, so why not? And so we spun around to face two fellow passengers in the back seats. We talked like we were sitting in a hotel lobby—except the car was still moving, albeit probably never faster than 25 miles per hour. I repeatedly felt an uncontrollable urge to turn my head and peek ahead to make sure the route ahead was clear. I gave in, over and over.

As we moved along, we turned our attention to the car’s interior. Mercedes representatives liked to describe it as a “cocoon,” suggesting a sort of private retreat. Unburdened from staring at the road, drivers can instead relax during rides and use the car as a personalized living room for napping, reading, or futzing with the touch screens installed on nearly every flat surface.

And displayed on those screens? Photos showing a 360-degree panorama of the Louvre museum in Paris and bucolic forest scenes. In theory, car owners could show off their vacation photos, play movies, get information about potential sightseeing side trips nearby, or make video calls with friends.

Much of that is purely theoretical at this point. Indeed, the concept car isn’t really fully functional, Mercedes acknowledges. It’s more of a source of inspiration that assumes all regulatory and technical hurdles have already been worked out. In fact, driving the car on city streets would be illegal because the car lacks full-autonomy (it was programmed specifically for the airfield) and is without some required safety features like air bags.

Mercedes does have driverless cars that it legally tests on public roads. However, they are modified production cars that lack the visual pizzaz of the F 015.

Some of the F 015’s high-tech wizardry is clearly still being worked on. For example, Mercedes has come up with a sort of light show to better communicate with pedestrians. If the car comes across people waiting to cross the road, it stops and uses a laser to project what looks like a green crosswalk on the street as a signal to walk. The trouble is that such a light show would be invisible in daylight.

As Mercedes sees it, in the future, cars and pedestrians will increasingly share the same space as cities become more densely populated. The company is hoping to prepare by imagining what it can do to make it safer and more convenient. In any case, driverless technology is slowly gaining momentum. Many production cars already feature more basic versions like collision avoidance systems, automated parking, and cruise control that keeps cars in their lanes.

But fully autonomous vehicles are still years away from being commercially available. And even then, it’s unlikely that laws will allow drivers to swivel their chairs away from the road. Not that they won’t crave a look.

Verne Kopytoff is a senior editor at Fortune.

Tesla's Full Self-Driving Software Is Getting a 20% Price Hike