By Catherine Clifford May 8, 2015
Opinions expressed by Entrepreneur contributors are their own.

When the Missouri Star Quilt Company decided to move into a new 42,500 square foot warehouse, co-founder Alan Doan did a lot of the manual labor to get the new facility ready for use. A natural night owl, he was going above and beyond, working almost into dawn.

“A lot of the odds and ends I figured I could do myself to save money. So I ended up doing weeks of hard labor pulling network cable, building computers, configuring routers, building pallet racking, and so on leading up to our big move into the warehouse,” he says. “I would work till 4, 5 a.m. and was exhausted to the point of tears some nights.”

And then, when the warehouse finally opened, in July 2014, a lot went wrong. “We launched the warehouse and it wasn't a huge success, things broke, we worked through it, but I was disheartened to say the least.”

Related: What Keeps Entrepreneurs Grounded, Peaceful and Happy Amid the Chaos

In moments of introspection following the exasperating opening of the warehouse, Doan, who owns and operates the quilting store with his four siblings and parents, went back and looked at pictures of when they first opened the doors. “We had such big smiles and were practically glowing,” he says, describing a photo of him and his sister and co-founder Sarah Galbraith. “Then Sarah and I had a picture after the warehouse opened, five years later, and we looked like we'd been punched in the gut. I called Sarah and said, ‘Did we make a mistake? We're not happier now than we were at the beginning. Where'd we screw up?’ And she told me to calm down, we were happier, we'd just lost that innocence we had.” 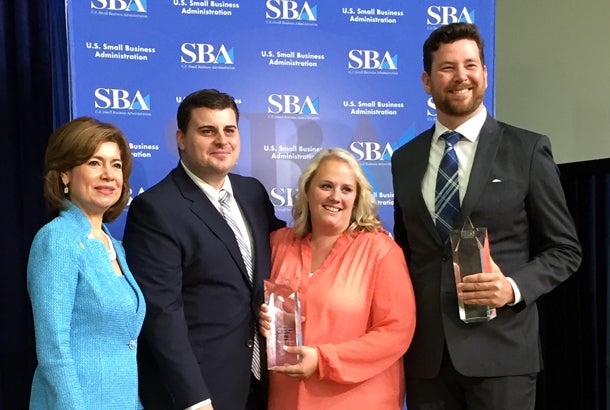 They had gone from dreamers to entrepreneurs.

As Doan and Galbraith lost their naivety, they tucked some pretty remarkable successes into their belts, too. The Missouri Star Quilt Company launched in November 2008 with a single sewing machine. Today, the company owns a retail store and has a thriving ecommerce business. The brother-sister entrepreneur duo have approximately 180 employees, with more than 150 of them full-time.

For more than 50 years, the U.S. president has declared one week to be National Small Business Week. Today marks the conclusion of that week for this year, and as part of the celebration, one small business owner is named the Small Business Person of the year. This afternoon, in a ceremony in a building adjacent to the White House, Doan and Galbraith were recognized for the honor.

Part of what elevates Missouri Star Quilt Company is that it has built a business where the online presence bolsters their brick-and-mortar store, and vice versa.

“This unique business is a combination of ecommerce and a bustling brick-and-mortar operation that has brought new life to Hamilton,” said SBA chief Maria Contreras-Sweet in a statement announcing the winner.  “Quilting tutorials posted on YouTube and hosted by Alan and Sarah’s mother, Jenny, became a big hit. The company now ships hundreds of packages every single day to customers all over the globe. Due to their popularity on YouTube, the brick-and-mortar shop has become a quilting destination.”

In addition to a YouTube channel with at least one video clocking more than 1.6 million views, the Missouri Star Quilt Company has almost 12,000 followers on Instagram, more than 5,000 followers on Twitter, and almost 300,000 “likes” on Facebook. There company also hosts a blog and online forum.

Once upon a time, the YouTube quilting tutorials were filmed with a handheld camcorder, and looked a bit on the “homemade” side. Today, Jenny, Alan and Sarah’s mother, films the tutorials in a professional production studio.

As the Missouri Star Quilt Company has grown, its founding team has learned a thing or two about what’s really involved in running a business.

“Right before you get married or have a baby or start a business, all you can see is the excitement ahead,” says Doan. Fast forward a few years and you are married a few years, or have a three year old baby, or a business that has grown to 180 employees, and you're still happy, you just know how much that happiness really costs. It takes a lot more than you can imagine, just remember that, and remember you chose it, so keep going.”

That determination, perseverance and sweat equity has made the company a national beacon for other Main Street entrepreneurs.

How the SBA Helped My Small Business Survive Hurricane Maria