When Chieh Huang was in first grade, his class went on a field trip to the aquarium. The teacher had asked parents to give their children a few dollars for souvenirs. Huang was the only child who brought none; his parents couldn’t afford to spare any. A trip chaperone bought him a 25-cent purple eraser. He treasured it for years and years.

The purple eraser is one reason that Huang, the co-founder and CEO of bulk shopping app Boxed, just set up a fund with his own personal assets to pay for the college tuition of all of his employees’ children. Education is what gave him the opportunity to make his life better; he wants to be sure that everyone who works for him can provide the same opportunity for their children.

Huang’s mother and father were Taiwanese immigrants who struggled to get good jobs in the U.S. because they weren’t fluent in English. When Huang was young, his mother worked as a cashier as a Chinese food restaurant and his father, unemployed for long stretches of time, would work on the weekends selling everything from stationery to sporting goods equipment to make ends meet. Despite his modest upbringing, Huang graduated from Johns Hopkins University, funded by a patchwork of private loans, federal financial aid and scholarship money, and later went on to Fordham Law School.

Huang, who is now 33, worked as a corporate attorney before he was the CEO of gaming company Astro Ape, which was bought by Zynga. After the acquisition, Huang was the director of Zynga Mobile New York before he went on to found Boxed.

For Huang, any little bit he can do to help someone else go to college is worth it. “If I didn’t go to college or if I didn’t have the education that I did, it would be very difficult for me to do what I do now,” he says. “I also realize that a lot of folks can’t afford college and if they don’t go to college this generation, then future generations might not be able to go as well. How do we break that cycle? And that is what I really want to do here,” says Huang.

The non-profit foundation is, so far, being funded exclusively from Huang’s own pocket. He has put several hundred thousand dollars of cash into the fund, which is worth between $1 and $2 million, and the rest is his own Boxed stock. The college tuition payment is available to the children of the 60 full-time Boxed.com employees. Currently, there are 12 children eligible for the tuition payment reimbursement.

The first beneficiary of the college tuition program will be the son of employee Joseph Bobko, the Head of Logistics of one of the Boxed warehouses. Bobko’s son had a surgery that wasn’t covered by insurance and to pay for it, Bobko had to dip into the son’s college fund. With Huang’s fund, Bobko’s son will receive $20,000 to be able to go to college this fall. 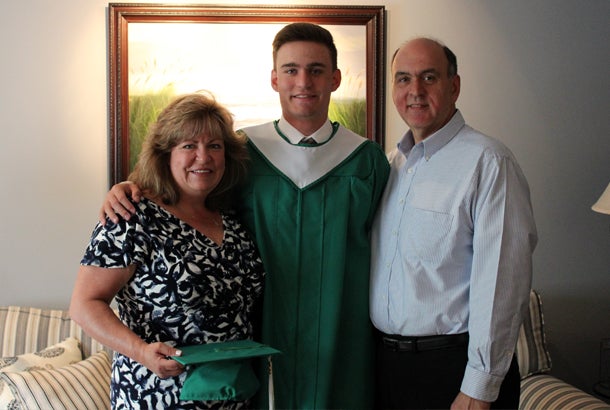 Huang’s expectation is that as the company grows, and the pool of eligible employee children grows, so too will the value of the fund. If the growth of Boxed so far is any indication, then Huang’s prediction might be reasonably safe. In November of 2013, Boxed was four guys in a windowless conference room. They upgrade to Huang’s garage. And only 18 months later, the Edison, N.J.-based company has 60 full-time employees, a total headcount of 100, and a national footprint. The majority of Boxed customers are between the ages of 25 and 44 and while Huang and his co-founders initially came up with the concept for city dwellers without the ability to get to a Costco, Sam’s Club or other big-box retail store, the ecommerce company has been really popular among people who live in exceptionally rural areas, for whom getting to a Costco-like store would be a long drive.

In addition to paying forward his own success, Huang also says he was inspired to create the college fund is to keep employees committed to the company over the long term. “After starting a few companies now and being in technology for a little bit, I have realized that my skillset is a very strange skillset in that I can’t do anything without anyone else. I am not like an artist where I can stand on the street and make beautiful art, me, alone in an apartment. I have realized that I am literally nothing -- and in terms of every CEO on the planet -- they are literally nothing if everyone walked out the door and no one believed in them,” he says.

Just as he needs his employees to believe in him, Huang also expects his investors to believe in him, too. So far, Boxed has received more than $30 million in venture funding from some of the most reputable firms in the business, including GGV Capital, First Round Capital and Peter Thiel's Founders Fund. Some of Boxed’s current investors have volunteered to put personal and fund money into the college program and all future investors in Boxed.com will be asked to contribute to the college fund too, says Huang.

Huang knows that not all entrepreneurs and small-business owners will be able to follow in his footsteps of paying for the college of all of his employee’s children. But he does hope that his action will be an inspiration for other business owners to reconsider what they might be able to do for their employees.

“It doesn’t have to be as huge,” he says. It’s all relative, and I absolutely think there is something that they can do. Hopefully, they are going to find that it’s the right thing to do.”

Related: Unhappy Workers Cost the U.S. Up to $550 Billion a Year (Infographic)