By Laura Entis October 6, 2015
Opinions expressed by Entrepreneur contributors are their own.

Sportswear has long concerned itself with the science of comfort and convenience. A visit to the Nike or Adidas website reveals products advertising wicking technology (which draws sweat off the body), mesh panels (for breathability), seamed taping (for increased durability) and a range of other features that promise a fit optimized to make you feel good.

Meanwhile for companies like Brooks Brothers and J.Crew, comfort is ultimately less important than whether or not the clothing chicly satisfies office dress codes.

These two separate fixations – athletic comfort vs. workplace-appropriate style – have left a hole in the market, says Aman Advani. No longer: along with Kit Hickey and Gihan Amarasiriwardena, Advani co-founded Ministry of Supply, a Boston-based company that grafts high-tech performance features onto professional menswear to make it as comfortable and easy to take care of as workout gear. 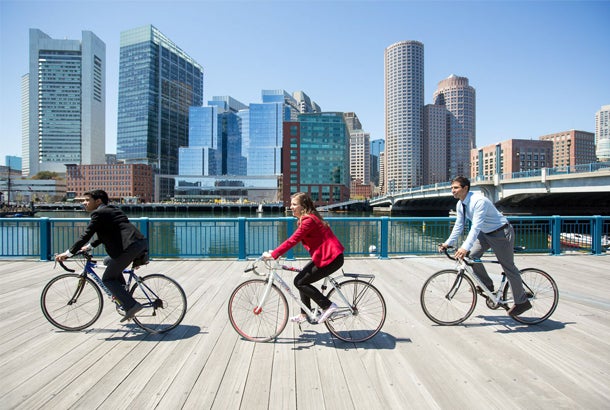 The vision behind Ministry of Supply is not a disruptive one; rather, it's a reaction to the shift in the workplace dress code.

Increasingly, people are wearing sportswear outside the gym. Known as "atheleisure" -- in which variations of high-end workout wear are designed to be worn both inside and outside the gym -- is a growing retail sector, one that's spawned a fleet of companies dedicated to the concept like tech-cashmere company Kit and Ace.

While industries such as design and tech – where dress codes are often passé – atheleisure is often a viable work option. But many other professions still require a stricter standard of dress. "We set out to create a whole new category of clothing -- not atheleisure but performance menswear," says Advani. "It's work appropriate but not work exclusive. You can wear it to work, and then out to dinner."

Hickey and Advani arrived at the Massachusetts Institute of Technology's Sloan School of Management in 2010 with the same basic idea: make business appropriate clothing feel more like outdoor wear, a vision that came from personal experience.

After graduating from Georgia Tech in 2007, Advani worked as a consultant. The position required constant travel and long hours. By the end of these all-too-common 18-hour workdays, his shirt would be untucked, he'd have developed sweat stains and his socks were damp and clammy. He felt generally gross. "I'd compare what I was wearing to my running clothes and think, why can't I just wear them instead?

Hickey had a similar experience. During the weekends, which she typically spent outdoors, her clothing gave her the confidence to face "any condition -- humid, rainy, cold, I was ready" she says. But at work, the reverse was true: "I would come in on Monday and not feel prepared. Or go into a meeting and feel self-conscious."

When the pair got assigned to the same core team in their first year at MIT, a professor put them in touch with Amarasiriwardena, a chemical engineering student who happened to have the same general vision. From there, the three worked as a team to develop a prototype for a dress shirt. In one aspect, they stood out from their peers -- "we were some of the only people at M.I.T. interested in fashion," says Hickey – but in other ways, they fit right in. From the start, their focus was deciphering how technological innovation could be applied to reengineer fabric for increased comfort, durability and ease of motion.

It was more scientific than the typical design process. They used thermal imaging to identify where the body produces the most heat in order to position laser perforations and licensed a body temperature regulating material designed by NASA to use in the shirt's fabric, so it would retain warmth in the cold and cool in the heat.

In 2012, they launched their first shirt, the Atmos, on Kickstarter. "We were selling to classmates, but we wanted to figure out if this would translate from a niche campus idea to a mass market company," says Hickey. The campaign's goal was $30,000. It raised $429,276.

Since then, it's been a whirlwind.

Ministry of Supply's line of clothing has expanded from that first dress shirt to include four different dress shirt designs ($98-$148), chinos ($118), dress slacks ($138), cardigans ($168), dress socks ($18) and a few additional items, which together add up to a minimal but comprehensive wardrobe for men. To create the line's clean, sharp look, the company recruited Jarlath Mellett, the former director of design at both Brooks Brothers and Theory, in 2013. It was an important hire: If the clothing didn't look good, all the high-tech considerations would be meaningless. 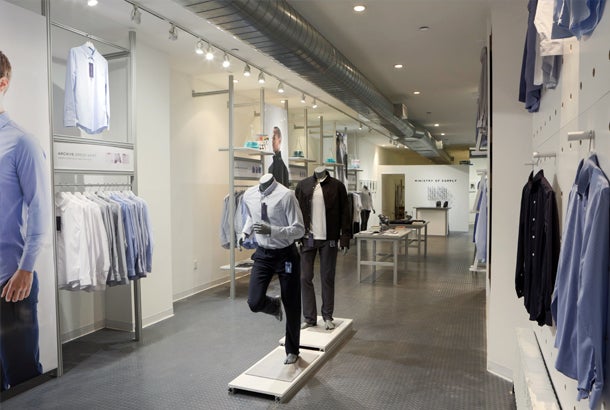 To date, Ministry of Supply has raised $6 million in funding. While Advani won't disclose sales, he says the company has worked to triple them each year. "When you accelerate too quickly, quality takes a dip. You can have fast and good, but you can't have both."

The clothes are available online, and the company has opened retail stores in Boston, San Francisco and most recently, New York City. Located in the heart of Soho, it's around the corner from a growing club of ecommerce to brick-and-mortar companies that includes Birchbox, Bonobos, Warby Parker and Rent the Runway.

Since the Kickstarter launch, competitors have emerged. "Particularly the last year or so we've seen half a dozen companies pop up that have some element of what we do," says Advani. Brooklyn-based Outlier is also using industrial design to create high-performance clothing that solves common fit and comfort issues and Bolt Threads, an Emeryville, Calif.-based startup founded by three Ph.D. students, is working to genetically engineer and mass produce the material found in spider webs to make clothing.

At the moment, unlike the 'athleisure' sector, there's no consensus on a category name. "Fashion tech?" says Advani. "You'll see a lot of people call it that."

Related: In Silicon Valley, a Fashion Show Just as Much About Tech as Style