Om at the Office: This Mobile Yoga Studio Stretches Limbs and Bottom Lines

The restorative effects of yoga aren’t typically associated with corporate profit, but McKenna Rowe, 44, sees more than a casual correlation. As the founder of the Los Angeles-based Chakra 5 Yoga, a company that specializes in teaching on-demand yoga classes at busy corporate offices, Rowe is a firm believer that offering yoga at work is just smart business.

Yes, it’s beneficial for the soul, and “sure, it contributes to employees’ well-being, no doubt about it,” she says. “But doing yoga at work has also been shown to increase productivity, which can make for a healthy bottom line, too.”

The practice, which gives employees a much-needed break from hunching over computer screens, also improves blood flow to the brain, sharpening mental focus. And, on top of being a wellness program tax write-off, saying Om at the office boosts employee morale and connection, fostering a positive, fun team spirit.

Related: What Yoga Can Teach You About Entrepreneurship

Related: 7 Tips for Merging 'Mindfulness' Into the Workplace

Tonia Douglas, 45, is the human resources and wellness director at Hankey Investment Company, a Los Angeles-based real estate lending firm and one of Chakra 5 Yoga’s clients. As opposed to taking a short “break” at her desk to scarf lunch down or zip through emails, Douglas finds that doing sun salutations with coworkers is a legitimately refreshing way to unwind and renew in the middle of the work day. “Taking time to let yourself truly relax and maybe even fall asleep for a minute in corpse pose, recharges your battery,” she says. “You’ll work happier -- and probably harder -- because you’ll have more energy when you get back to your desk. I’ve seen it. It’s powerful.”

Ever since, corporate yoga has consistently grown, branching out across the U.S. Today, major American corporations like Aetna, Apple (whose legendary co-founder Steve Jobs was a longtime yogi), AT&T, Citibank, HBO, IBM, Nike and Oracle, to name a few, have all incorporated the ancient Indian practice into their employee wellness offerings.

At Aetna, more than one-quarter of the health insurer’s 50,000 employees has taken part in at least one yoga session, reports the New York Times. Of those, many say they’ve experienced significant reductions in stress and pain levels, enhanced quality of sleep and increased productivity. Overall, Aetna, which struggles to keep up with employee demand for on-site yoga classes, approximates that its yoga program is “worth $3,000 per employee per year.”

The path to Om

Rowe caught the yoga bug as a little girl, watching reruns of American yoga pioneer Lilias Folan, “the Julia Child of yoga,” as she gracefully twisted and shifted in bright outfits on PBS. Even after years of working in the digital marketing industry for clients in entertainment, publishing and fashion, her passion for yoga never faded. “I kept working harder and longer hours and wasn’t sure if it was worth it,” Rowe says. And so in 2009, Rowe took a sabbatical to get her Hatha/Kundalini yoga teacher certification. Wanting to use her training to help people recover from physical and emotional traumas through restorative yoga, she drew up a business plan and secured a small-business loan that she supplemented with a chunk of her own savings and retirement funds.

At first, Rowe kept her job as an executive of digital marketing at the Fashion Institute in downtown Los Angeles, teaching yoga classes in empty classrooms, conference rooms and outside under the sky, before, after and in-between work. Eager to scale fast, she began offering classes to residents in loft developments that were cropping up in the urban center. “Early on I had this notion of ‘I bring the yoga to you,’” she says, “‘on your schedule, your way.’ There was a need in the market and I went for it.” 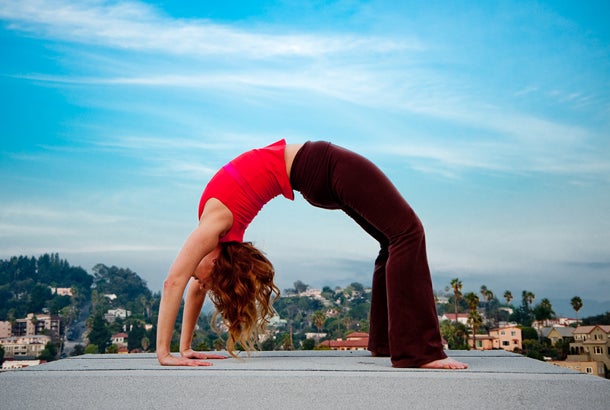 Related: A Yoga Franchise for Kids Stretches Bodies and Minds

In 2011, she veered off the grassroots yoga-on-demand path and opened her own studio. In business for less than a year, the decision didn’t work out. “Ultimately, it ended up being an enormous cost, a huge drain,” she says, but, nonetheless, it was a learning opportunity. The studio gave Rowe a chance to closely observe the teaching styles of the yoga instructors she still employs today, as well as to watch how they interact with students. “In terms of quality-controling the experience we provide, I feel like I can better trust them when I send them out into the field now,” she says.

With the studio shuttered, Rowe shifted back to a mobile, corporate business-to-business model, which she says is alive, well and thriving. While she declined to provide any earnings numbers, she says she’s roughly doubled her client base and revenue since going mobile-only. At this point, she says, “almost all” of her new clients are reaching out to her, not the other way around.

Throughout Chakra 5 Yoga’s evolution, Rowe has continued holding down a day job. Right now, she works as the lead user experience designer at Fender Musical Instruments, maker of the rock-n-roll classic Fender Stratocaster electric guitar. Before that, she held similar positions at Nasty Gal, the Walt Disney Company and several other top-shelf brands.

Related: Why Office Singing May Be the Next Yoga

While working 9 to 5 may not sound new age-y or romantic, she says “piggybacking” her traveling yoga business onto her 17-year career in Hollywood’s fashion and entertainment industries makes financial sense. The steady cash flow allows her to invest money into marketing and pay her yoga teachers on time, regardless of whether or not clients do the same. “I can organically grow my company without stressing out a lot about making ends meet,” she reflects. Savings from her day jobs also allow her to be choosier about the clients she works with.

Today her  team of seven certified and insured yoga teachers -- and occasionally Rowe herself -- fan out along the densely populated hills and valleys of Los Angeles County’s 4,752 square miles. They deliver soulful, therapeutic group yoga sessions on-site and by appointment to some 15 businesses, schools and organizations. Chakra 5 Yoga also employs a Pilates instructor, a raw foods chef who occasionally serves up healthy eats for clients and a DJ who spins chill music during classes when needed.

#rawfood chef Garland Whitt gives a demo at one of our employee wellness events. pic.twitter.com/h2JBDgmPK8

Most days, Rowe’s team members work individually with dedicated clients, but they sometimes work together to lead larger-scale yoga and meditation classes and company wellness events. A typical employee wellness program provided by Chakra 5 Yoga might open with a meditation, followed by a yoga class, then a cooking demo, with live DJ-picked tunes playing all the while. It all depends on what the client requests.

Typical on-site classes cost companies $120 per weekly recurring hour-long session, with unlimited students. People can bring their own yoga mats or rent mats from Chakra 5 Yoga for a nominal fee. Classes are held in private spaces, like workplace conference rooms and company gyms, or in open spaces, like office building mezzanines and outdoor courtyards. Clients are free to choose where classes take place and how intense they are. In general, the company caters to yoga newbies. “We’re not doing power yoga or hot, Level 3 Vinyasa-style yoga with our clients,” says Rowe. “We work with people who are generally not very athletic and are a little bit fearful or self-conscious when it comes to yoga, so we mold our classes to their specific needs.”

Meet Lewis, one of the Chakra 5 Mobile yoga instructors. Hire us for Office Yoga! http://t.co/iPyfClryma pic.twitter.com/umy3Ebwzyw

Related: The Apps That Help This Yoga Instructor Run Her Business from Half a World Away

Back at Hankey Investment Company, Douglas feels Chakra 5 Yoga’s frequent yoga sessions lend the company a distinct advantage in attracting quality talent. “It’s really changed our company culture and our outlook toward employee acquisition and retention,” she says. “It says we take making our people happy and healthy seriously, that we want this to be the best possible place for them to work.”

At the risk of sounding a bit New Age corny here, you could say caring for employees through yoga at work embodies the karmic spirit of namaste. Employers who offer the discipline in the office, honor the spirit and light of those who work for them.

Namaste or no namaste, it doesn’t hurt that this often leads to increased productivity and lower turnover. “When you finish taking a yoga class at work, you feel great,” Rowe says. “Your energy is up. Your body and mind are at peace, and that sense of calm and clarity spills over into everything you do throughout the rest of your workday.”