As the popular saying goes a picture can speak a thousand words and an advertisement can speak ten thousand. Okay, we just made the second part to that statement, but if you ask any advertising guru, he would agree with the ten thousand part. The festive season is here and companies are spending a fortune to lure customers to buy their products or to popularise them. Commercials gamut ranges from vivid moving pictures you see on TV and YouTube channels to the static images in newspapers and magazines.

We loved many of them, but noticed and spoke about those that had a great message in them or were very innovative. Some of them made us think hard and some of them made us laugh hard, whatever the case was, these advertisements left an impression on us. Some of them even came up when we were relaxing with friends over weekend brunch.

In an advertisement, what we see is the final product. But, what most of us do not realise is that this still image or moving picture has efforts of brilliant minds putting countless hours in creating one commercial, which might be forgotten in a fortnight. Not to forget the amount of cash that goes in some of them is mind boggling, especially in TV commercials.

As said before, the festivities have begun, and we saw some great campaigns this season. Here are some of our favourites of the season that have a great message and are pretty much eye-catching.

As soon as you see a young boy holding a tub over his head, you get a sense of the poverty-stricken world we live in. He is standing in a lavish bathroom with extravagant linen towels, superb floor tiles and good woodwork that looks somewhat similar to the one found in your home, but something is odd about this picture.

The question – what is Colgate trying to say in this print advertisement? – comes to mind. Then you see the text on top “what you waste in 2 minutes is all his family has for a day.” Then at the bottom corner the message is loud and clear. “Close the tap while brushing.” Suddenly, a gush of emotions runs though your mind via this brilliant piece of advertisement that water is a scarce commodity and lives are lost in some parts of the world for just a bucket of drinking water. 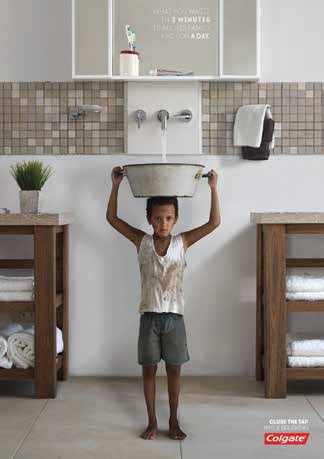 We take water for granted and mostly keep the tap on while brushing. Colgate might be a multinational that is out here to make a profit, but the message they are sending with this print commercial is sensible and wise. None of us should waste water in any form.

Charm At Work
A well-dressed man or woman can make heads turn and can certainly climb the work ladder quickly. The creative heads at John Miller surely know that and have presented a really good and appealing print commercial with a nice tagline. It has a well-dressed modern man with not to forget stubble, which many thought of as a taboo in the office, but now is loved by all.

A blue bow tie with a pink shirt goes really well, showcasing the modern man who is not scared to wear any colour. Standing in an office environment, and the look to take-over-it-all, the guy has the looks that say it’s time for business and profits. Then there is the tag line: Charm At Work. It is a pretty much straight forward advertisement that has a bang on target message. Dress well and you can quickly go up the career ladder. It’s a nice way to sell clothes as most in the office sphere are looking to get ahead quickly.

Pepsi is known for its funny commercials. This one is no different. This TV advertisement starts with a large group of youngsters standing for justice and has some demands that the college heads need to fulfil. Media is involved and trying to get an interview of the leader of this movement. The leader is telling the media that they will go on permanent hunger strike and nobody will even drink a drop of water and suddenly a student is seen to pick up a bottle of Pepsi behind him and guzzling it.

Suddenly, everything goes quite and people are stunned, at one side students are going on hunger strike and on the other this student is seen enjoying a bottle of Pepsi. With the tag line “Pepsi Thi Pi Gaya.” The expressions of the students and the person drinking Pepsi are priceless. This video has garnered almost 1 million YouTube hits and one can watch this video. A must-watch piece of advertisement that runs for 1 minute.

The festivities have begun and warm emotions are available in abundance. Dell knows it and they have managed to hit the bull’s eye with their Share The Joy TV campaign. It starts with a young boy standing on the roof messaging his friends who suddenly appear there and spread the festive love.

Then a lady comes into the frame and sees his image with his friends on a social channel on her Dell screen. She then looks at the elderly help in her home, who is playing with children and decorating the home. She quickly books a ticket for him using the same laptop and spreads the love with him.

He is seen with packed bags and ready to leave for his hometown. Then a couple is seen making rangoli outside their home, when they see a plain white door across the hall of their neighbours. They make similar rangoli at the neighbours doorstep and also put flowers all around, again spreading the love when the elderly lady opens the door to see what is happening outside.

This is a great ad that has some emotions, laughter and sense of just being human. Dell has managed to place its products well within the advertisement, which enables these people to efficiently help others with the tagline Spread the Love. The video has already got 1.3 million hits on YouTube.

Although it seems like an international advertisement from camp Samsung, it has come at the right time to India. What does each start-up desire? A great idea and a venture capitalist (VC) to fund that idea. Samsung’s creative directors chose the entrepreneurial way to showcase the new Samsung Galaxy Note 5 in this TV commercial.

This moving picture showcases a young woman who has come up with an idea to design new-age furniture on the Note 5. She shares it with her friends and goes out to find capital for her idea, but is turned down few times before she manages to pitch her idea to one of the VC honchos in a cab.

He gives her his card and the nod to use his capital to fund her idea. Her don’t give up attitude is put in the mix with the new smartphone enabling her to achieve what she desires. This is a brilliant advertisement that both motivates and makes you wonder.

On YouTube this advertisement has already got over 2.7 million hits and is quickly growing. If you have watched the above commercial by Samsung, they are running another great “Be Fearless” advertisement on the tele.