7 Copywriting Tricks Based on Psychology

By Kaleigh Moore January 13, 2016
This story originally appeared on KISSmetrics

Copywriting sometimes feels like one of those elusive skills that only the best of the best professionals truly possess.

They know how and what to write to increase conversions, and seem to have a magic wand they wave over words and turn into gold.

But wouldn’t it be nice if you had a few of their best copywriting hacks up your own sleeve?

Guess what? You can.

In this post, we’ll look at 7 psychology-based copywriting hacks that can get youthat much closer to having a copywriting wand of your own.

The illusory truth effect helps our brain make decisions throughout the day, acting as a shortcut for the decision-making process so that our brains don’t get overloaded.

This psychological tactic gives weight to concepts and ideas that we hear over and over again. Thus, repeated ideas = greater accuracy, more truth.

Researchers conducted a survey that asked participants to rate how much they trusted a statement. Some statements were repeated multiple times, while others were stated only once. The study found that people consistently rated the repeated statements as more trustworthy in comparison to statements that were not. 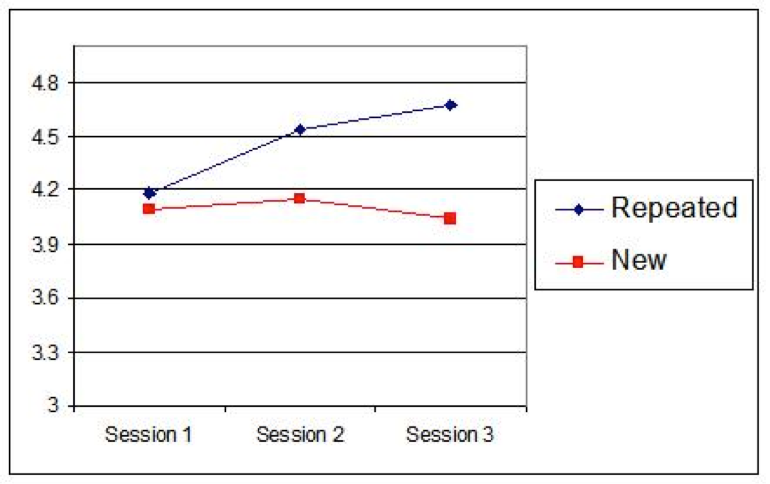 The takeaway: You know the old saying from Dale Carnegie, “Tell the audience what you’re going to say, say it; then tell them what you’ve said.” Within your copy, repeat the statements you most want your audience to believe and remember.

Rhyming gives copy a fun and quirky air, but who knew it also adds validity?

It’s true: A 2000 study conducted by McGlone and Tofighbakhsh at Lafayette College noted that poetic form impacted people’s perceptions of accuracy—specifically in relation to human behavior.

The psychologists noted their findings indicated rhyme allowed statements to be processed more fluently in the human brain, which is sometimes perceived as truthfulness.

Look at how Jaguar used this tactic in its 1962 ad: 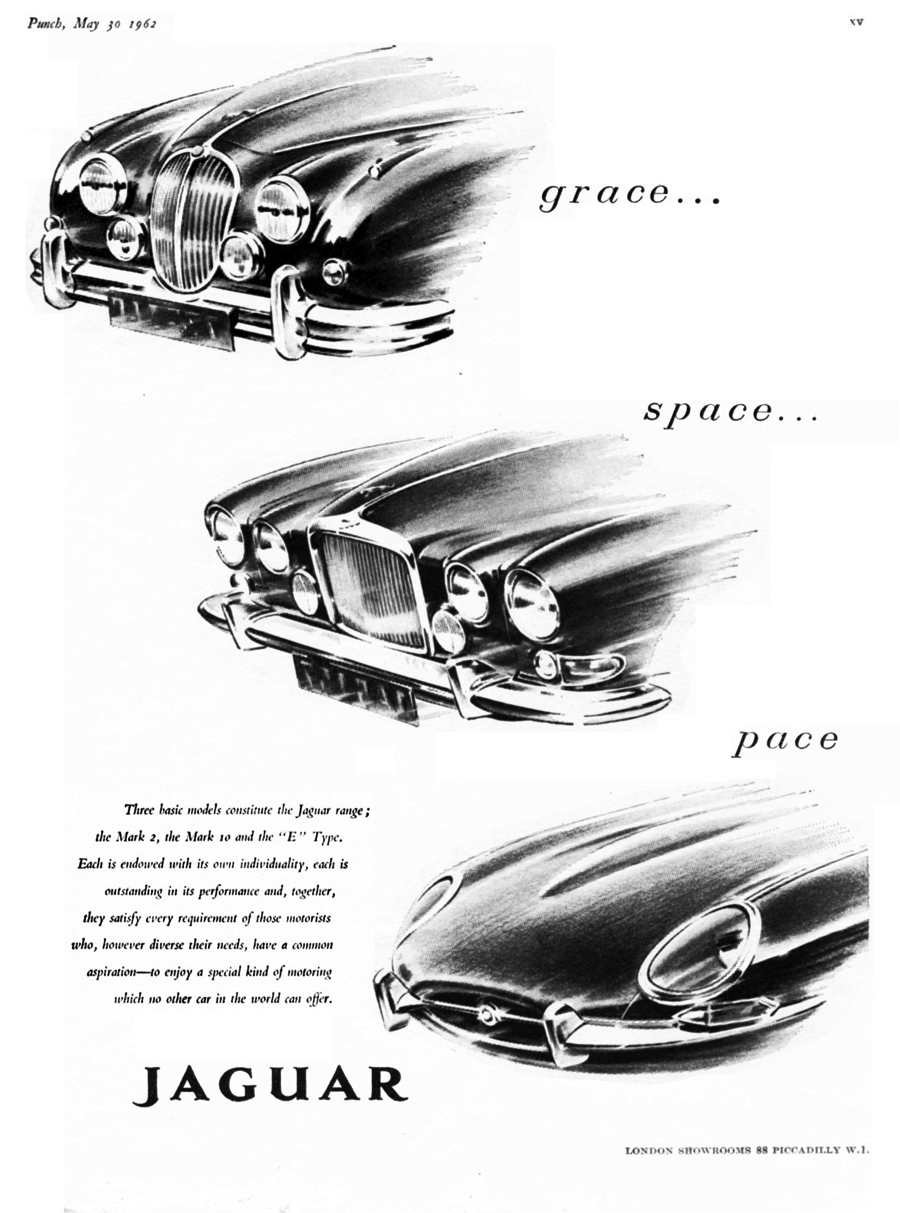 The takeaway: The brain readily processes rhyming words and phrases, which sometimes means we view them as more truthful or accurate. Using rhymes in your copy adds a bit of eccentricity to your writing voice and can also make your claims appear more valid.

Knowing that online readers are scanning the text instead of consuming it word-for-word, we often use bullet points, short paragraphs, and lists to make content more consumable. But where information is placed within that format is something to consider.

Psychologists that have studied the serial position effect found that when participants hear a list of words and recall them immediately, they have higher accuracy with the words at the beginning and end of a series in comparison to those mid-list. This is known as primacy (for the first few words) and recency (for the words at the end of the list.) 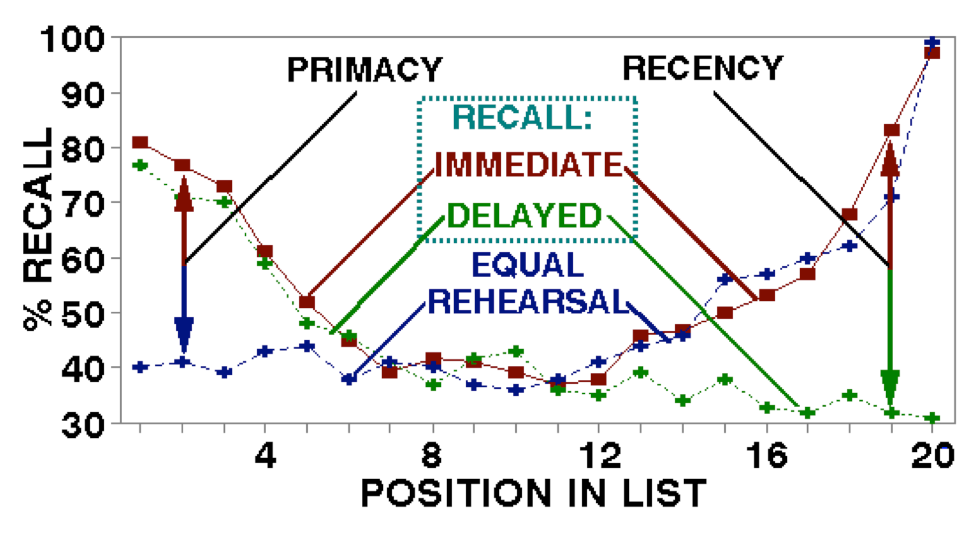 The Takeaway: When writing copy, place the ideas you most care about the reader remembering at the beginning and end of a piece. Within an email context, this means your opening line and closing line are the two most valuable pieces of real estate.

A well-known study from 1978 illustrates the effect of using justification—maybe you’ve heard of it? It’s the Xerox line study.

In the experiment, people waiting in line to use the machine are studied as they react to people asking to jump the line. Those wanting to skip the line asked three different ways:

For those who used #1, or “because I’m in a rush?” 94% of people agreed to allow them to do so. At the same time, 93% allowed a person to pass with response #3—which was seemingly devoid of a valid reason. In comparison, however, only 60% agreed to response #2, which lacked the word ‘because.’

Researchers like Ellen Langer of Harvard believe this happens because of mindlessness—which calls upon internal scripts that guide our actions and responses to different scenarios. It’s a sort of an autopilot mode that our brains use to made decisions within social contexts, possibly as an evolutionary survival tool. When we hear a trigger word like ‘because’, it helps us assign credit, blame, or reason, and then respond accordingly (even when the reason isn’t all that valid.)

The Takeaway: Because is a powerful word. When writing persuasive copy, include ‘because’ to reinforce that you have a valid reason for your request—whether it’s to sign up for a free trial, download a template, complete a form, etc.

Reminding your readers that they have the freedom to choose is another strategy based in psychology that’s proven to have powerful persuasive powers. “But you are free” (BYAF) explicitly reminds the reader he or she is free to refuse a request.

Christopher Carpenter at Western Illinois University conducted a worldwide meta-analysis on this topic, which examined 42 different studies on BYAF with more than 22,000 participants.

His findings were dramatic: BYAF doubled the success rate for compliancewhen employed with participants in a non-sales context. Let me repeat that. Over 22,000 people were studied, and when BYAF was used, conversion rates doubled. DOUBLED! Magic words, don’t you think?

So, for example: Say you’re conducting an online survey. You could use BYAF by writing something like:

We’d be honored if you would share your insights on our 2015 homeowners survey, but you are free to pass on the opportunity as well.

The Takeaway: Remind your readers that they have the freedom to make a choice—no one is forcing them to act. This simple reminder goes a long, long way.

Remember how we talked about primacy and recency earlier? Well, using a P.S. line in your copy is another way you can tap into that recency effect.

Because it’s literally post-script, it’s the last message a reader sees upon reaching the bottom of the page—so we know it’s going to stand out.

Fundraising organizations have been using the P.S. tactic for years.

But, why? Ray Jutkins, a direct mail copywriter, noted that 79% of donors and prospects that open direct mail read the postscript first.

This P.S. line includes a relevant CTA and encourages the reader to reply or offer feedback in another way–showing the company values the opinions of its users.

It seems we’ve come to understand the P.S. line as the most essential or important piece of long-form content, which is why a P.S. line is the place you should put your main call to action. For many, it’s the first (or only) place the eye goes when reading.

The Takeaway: When writing long-form content (like email, blog posts, direct mail, etc.) use a P.S. line to reinforce your main CTA.

Krish Sathian at Emory University has conducted multiple studies on how textural adjectives activate the brain in a unique way. He’s found that using textural metaphors—things like “Having a rough day?” vs. “Having a bad day?” activated the brain’s sensory areas in very different ways.

fMRI data collected from those who were surveyed showed that activity jumped in the somatosensory cortex when a textural metaphor was used—but was quiet when literal meanings were used in their place.

The Takeaway: Your copy should make good use of textural adjectives in place of commonly used colloquialisms. Think about how you can surprise your readers by inserting a texture-based word where they’re expecting a more bland, texture-less substitute.

Thanks to the psychology-based research each of these 7 copywriting hacks taps into, you can create more effective, conversion-oriented copy.

Don’t reinvent the wheel—look to the studies that have already shed light on what works and what doesn’t in terms of persuasion, memory, and conversion.

Who knows? You may find that doing something as simple as inserting a single word will dramatically increase the success of your written content.

Kaleigh Moore is a social-media consultant and copywriter who helps software-as-a-service companies craft intelligent content with a charming human element.

The Step-by-Step Guide to Creating and Publishing Quality Content

Will Netflix Continue to Silence Its Doubters With a Strong Earnings Report?

CDW (CDW) Surges 4.8%: Is This an Indication of Further Gains?