NASA's Revolutionary Insulation Waiting to be Brought to India

By Rustam Singh February 10, 2016
Opinions expressed by Entrepreneur contributors are their own.
You're reading Entrepreneur India, an international franchise of Entrepreneur Media.

In the early 1930’s, an American scientist and chemical engineer had a wager on who could replace the liquid in jelly with gas without losing the structural mass and shape. This would later be used by NASA itself to combat temperatures barely a few degrees hotter than absolute zero – and insulate astronauts from the coldness of outer space. Aerogels are literally revolutionary products – worth more than their weight in gold for several decades, until the late 1990’s when globalization took over. Now with capitalism working its magic, prices for aerogels are cheaper than ever before – and they offer scope in the bio medical industry, automobile industry, textile, defense, computing and practically any application that uses insulation.

Here are a few of the world records aerogel holds:

The world’s most insulting material, silica aerogel, is in the form of tiny which silica grains of sand, but plenty of manufacturers are now producing aerogel imbedded fabrics, which looks like felt, but weighs dramatically less. Why should you be bothered by this amazing stuff? Because all industries are tapping into it and there’s not a single business/entrepreneur in India that has tried to make products out of it. 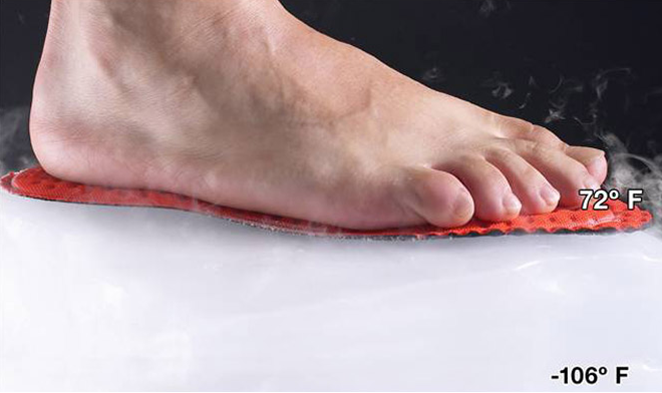 Here are some top picks of the possibilities of aerogel in India, which involve minimal investment and can revolutionize their respective industry:

Marketed as “No place on this planet Earth where you can feel cold wearing this”, few brands globally include aerogel inserts, or stuffed inside aerogel panels which make them the world’s most efficient insulated jackets. From the peak of Mount Everest, to testing a jet stream of liquid nitrogen directly on the spot above the jacket where your heart is, the wearer cannot feel even a slight tint of cold. They are compression free – which means in theory you could sleep in them and they’re still be as efficient after years. Superior breathability and naturally hydrophobic nature ensure sweat and heating are no problem. All of this, at a weight that is a fraction of cotton or goose down and just at 3mm thick! Oros Outerwear makes similar jackets.

A negligibly thin insole made from aerogel sandwiched between a surface that induces friction and behold, you have an insole with nearly superpowers. You can walk over a thick block of ice on a snowed mountain in winters wearing your regular shoes or on the Sahara Desert at 3PM in July without the outside temperature peeking through your existing footwear. Toasty Feet is an insole with verified results of its performance.

Wrap your custom exhaust or header on your motorbike or car with a 3mm aerogel layer, and no matter how hot it gets, the outside surface will be touch friendly to even baby skin. Wrap the inlet to decrease inlet air’s temperature for a better performance, or your engine compartment or even the whole car’s inner to keep the air conditioning effective at abnormal levels. Aerogel prevents heat or cold loss, and can also make sure engine bonnets don’t heat up even after hours of continuous high-rev driving.

Forget mittens, keep individually wrapped fingers warm with a pair of gloves that refuse to be cold. Complete with mobility, sweat evaporation and semi waterproof, you cannot possibly go wrong with a pair of aerogel gloves even at the peak of Everest or a stroll down the block on a winters day. Even oven mitts that are as thin as regular gloves but don’t burn your fingertips. 45NRTH's STURMFIST are a pair of aerogel gloves to try.

Imagine a heavily insulted bottle that doesn’t freeze even in icy slopes or keeps your tea piping hot for hours – without weighing like a dumbbell. A casserole to store chapattis or even a water cooler that doesn’t require excessive cooling to chill the water – these are just a few of its miraculous uses. Essentially, if crafted inside pre existing heating or cooling devices such as heaters, refrigerators, air conditioners, the possibilities of creating abnormally efficient devices are endless. Laken ISO 70 is a lightweight aerogel water bottle.

What are your favorite DIY applications if you could get your hands on some aerogel? Is your mind ticking on the possibilities of use and being the first in India to bring consumer friendly aerogel products? Let us know in the comments on our official Facebook page Entrepreneur India

They launch an electric scooter that plays music and avoids obstacles