"We have no reason whatsoever not to excel, with all that’s being given to us.” This statement by Dr. Sheikha Aisha bint Faleh bin Nasser Al-Thani perhaps best explains why this enterprising Qatari woman is a worthy role model for people not just in her own country, but in the GCC and beyond as well. Consider her credentials for a moment. Yes, she’s a member of Qatar’s ruling family. But she’s not just that- Sheikha Aisha is also the founder and Chairperson of the Al Faleh Group, perhaps best known for its educational institutions under the Doha Academy umbrella. Her holding company also has a presence in other sectors- F&B, hospitality and healthcare are the industries currently on its agenda. But note that Sheikha Aisha cannot be defined just by her business interests either- once again, she’s more than just that. Sheikha Aisha is also a committed philanthropist, whose zeal for the initiatives she associates herself with in this regard is quite exemplary. One of these ventures is Reach Out To Asia (ROTA), which aims to provide basic, quality education to children across the Asian continent, and she sits on the board of directors for this organization, which was founded by H.E. Sheikha Al Mayassa bint Hamad Al-Thani. She is also a founding member of the board of patrons (and former Chairperson) of the World Congress of Muslim Philanthropists (WCMP), a global network aimed at advancing the notion of giving in the Islamic world. Now, put all of the aforementioned roles together, and then maybe, one can get an idea of the sheer scale of the work that Sheikha Aisha does- and she does it all quite cheerfully, because, as she put it so simply, she likes what she does.

And while some of us, if put in Sheikha Aisha’s place right now, may be content with all what we have achieved so far, she is certainly not like that- she has a lot more planned ahead for her enterprises. Her business’ educational arm will soon be announcing the launch of the Qatari campus of a prominent British university- the name and more details about the venture will be released soon, Sheikha Aisha promises. “This has been a work in progress for 10 years, I’m really sad to say,” she reveals. “Because we forged a partnership with another university and it fell through, because of the red tape. But with this university, alhamdullilah, we are very close to launching, and even the authorities here are very excited about it. We have had great support from the Ministry of Education in Qatar, and hopefully, in September, we’ll see its launch happening.” It’s easy to see that Sheikha Aisha is excited about her new venture, and her enthusiasm shows- here is someone who is heavily invested in –and a major proponent of- the education sector in Qatar. “I truly believe that there is a strong positive correlation between the education the person receives, and how much he/she achieves in life,” she says. “It’s sad, but here in the Middle East, we are not fortunate enough to have high numbers like in Europe. But having served two terms with the Qatar Supreme Education Council, I can tell you that countries like Qatar have really put education on the front burner. They are investing heavily in education, and we are becoming the center of excellence for education in the region. Not only should we provide basic educational skills, but we should also, in my opinion, develop curricula that include practical skills that help individuals become more innovative, and encourage entrepreneurship as well. So, in my opinion, education is key. If you ask a person to excel without education, it’s like asking somebody to drive a car with their hands tied.” 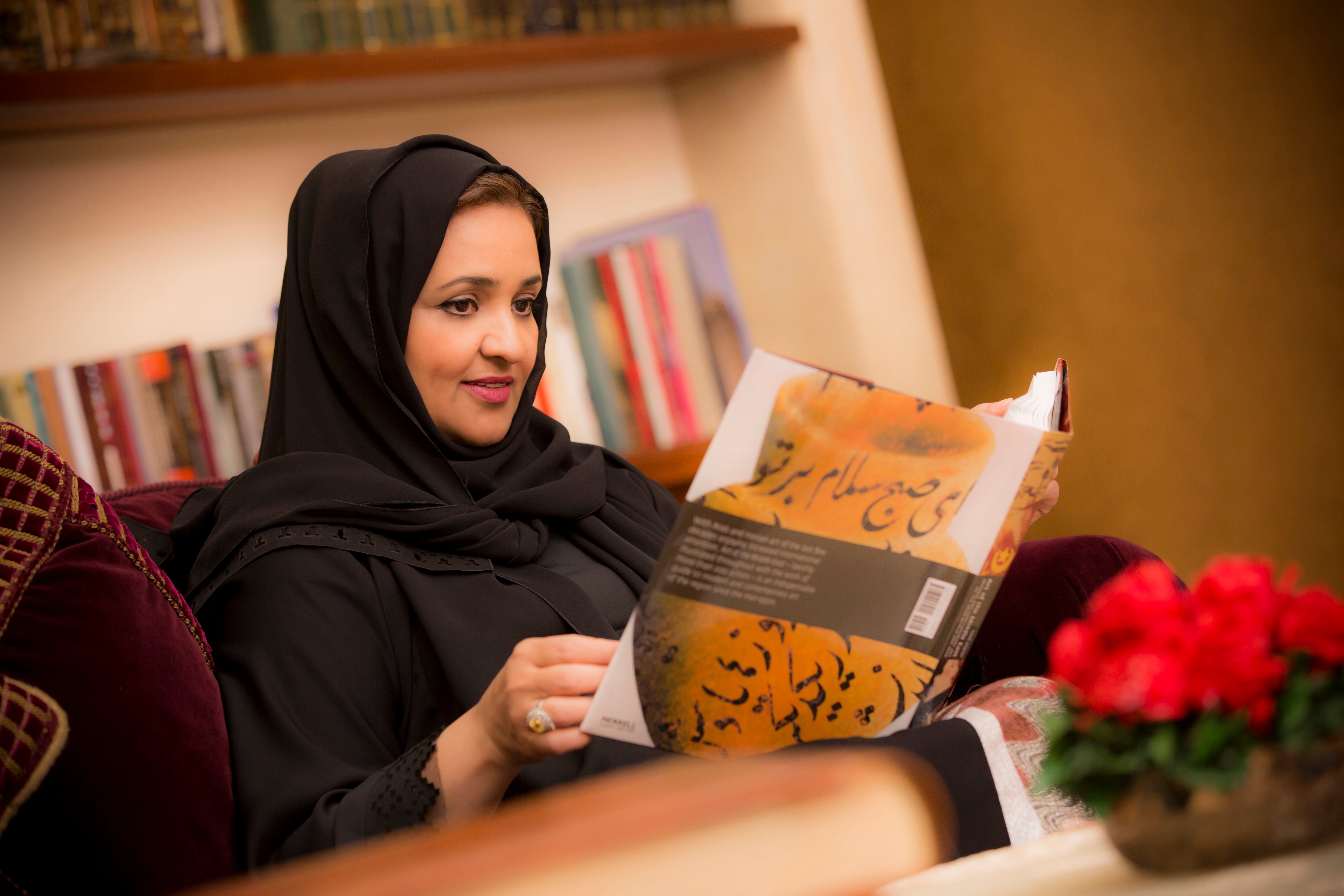 It’s worth pointing out here that Sheikha Aisha has quite an illustrious educational background- she holds a Bachelor’s Degree in Education and English Literature from the University of Qatar, a MBA from the University of Hull in the U.K., and a Ph.D. from the Cass Business School in the U.K. So ask her if she thinks executive education is important for entrepreneurs and people looking to make it big in the business world, Sheikha Aisha’s reply is a resounding yes. “It’s very important,” she says. “While I was doing my MBA and PhD, my husband was constantly telling me, ‘You are losing out on opportunities.’ I said, ‘No, because, without this degree, I won’t be able to excel.’ Really- education is key. I always advise people: invest in your own education, your kids’ education, because there’s no excelling without that. And people talk about practical skills- yes, of course, they are important. But you need to have the basis. I mean, sometimes, as business owners, we have people coming in, and they start with us- they have the education, they don’t have the practical skills. So we teach them those skills and training them to excel. But then, if we get applicants with no executive education, we have to train them from scratch- which we don’t have time for.” However, Sheikha Aisha acknowledges that there is a gap to be filled in terms of executive education options in Qatar and in the region at the large. “Even with the executive education that’s on offer right now, sadly, it’s not much,” she notes. “And this is where private-public partnerships should really now be forged and put in full force.”

Even as the education-focused segment of her business moves forward, Sheikha Aisha is also seeing further growth in the cards for the other sectors her company is involved in. For instance, the hospitality side of her business is poised for an exciting new deal with a big-name enterprise soon- again, Sheikha Aisha can’t reveal too many details about this right now, but she claims that it is a rather proud moment for her and her company. A line of healthcare clinics is also on the agenda for the Al Faleh Group. Now, with all of what is going on with the different branches of her company, one has to wonder: how involved is Sheikha Aisha in the running of her enterprise? Well, as it turns out, Sheikha Aisha belongs to the breed of hands-on entrepreneurs: she seems to be a disciple of the “lead as you would like others to follow” kind of philosophy. But again, note here that she does all of the above while also catering to her philanthropic activities and her own personal life as well. So, now, the question is: does she not get stressed with all of what she has going on in her work? Sheikha Aisha dismisses the query with a laugh. “The key is: are you doing what you like?” she says. “Because it’s fun for me to come to work everyday. I am doing this fun thing I like, so it’s not work, really. And these people [in my company] are my family now- my team is my family, and I care about each one of them… They are family to us, and you’ll be surprised- most of them have been with me for 20 years. People seem to tend to stay on with us, alhamdullilah.”

Her business accomplishments notwithstanding, Sheikha Aisha admits that it’s her philanthropy work that leaves her feeling more fulfilled. “Yes, I do get a sense of satisfaction from my corporate ventures, but what exceeds that is the satisfaction I get from my philanthropic activities,” she says, pointing to her work with ROTA and WCMP as an example. She’s also a major proponent for social entrepreneurship, which is why she’s particularly excited about the upcoming eighth edition of ROTA’s Empower conference in March, which has as its theme, “Innovation in Youth Social Entrepreneurship.” As a youth-led conference that focuses on how young people in Qatar can participate in the development of both their local and global communities, Empower has seen itself (and its impact) grow since its inception in 2009. “Empower aims to attract young people from the ages of 16 till 26- this is the age when you get all these innovative ideas,” she says. “Participants are, by no means, only from Qatar- we have them from all over the world. So it’s by the youth, led by them- they do it all. They even pick their speakers sometimes. What this event does is that it provides them with the skills necessary to build their communities, and it actually gives them a voice to talk about global issues. The year before, it was about water scarcity- and we had some great ideas [showcased at the event]! I said, this should be put in a report and sent to the United Nations or something. So we did achieve our aim, which is to enable these young people to take leadership roles, and actually, now, some of them are involved with local enterprises on a volunteer basis, while some of them are actually working there right now.”

Sheikha Aisha’s accomplishments in her life so far are, by their own accord, worthy of applause, but it takes on a whole other level of significance when you consider that she is a woman in the rather maledominated Arab business arena. To give her credit though, Sheikha Aisha acknowledges that her family’s name has definitely been a boon for her, but she adds that when it comes to running her business, it’s always been more about the sense of personal accomplishment that drove her on. “It doesn’t matter where you come from, or who you are the daughter of, [running a business] gives fulfillment, really. And I think every woman would like to do it- maybe, they don’t have the know-how. I am privileged in that, being who I am, I have more access to everything: resources, capital, etc. But it’s a privilege that, I think, should spread.” And according to Sheikha Aisha, there is potential in this region for women to help each other out in setting up their own enterprises- research has said that women in Qatar and the GCC often have a great amount of personal wealth, she notes, and this could be tapped into as a source of finance for entrepreneurs. But if this is to happen, there needs to be more interaction between these women- networking, Sheikha Aisha says, is essential if things are to move forward in this direction. “Changing the demographics in business is not easy, because we know it’s male-dominated, especially in the GCC countries,” she notes. “And so it will take an orchestrated effort between women in Qatar and women everywhere actually to change that. So, I really hope to see more platforms that bring people together… Women don’t have [enough] platforms to network, and this is really something we should look into, as to how we can do that.” But things are changing- and Sheikha Aisha highlights the fact that Qatar is making a concerted effort to do just that. The country’s leadership has been extremely vocal about empowering women in Qatar, and with people like Sheikha Aisha to lead the way, the future is looking quite bright indeed.