By Michelle Castillo March 24, 2016
This story originally appeared on CNBC

For many small businesses, the idea of ever having a Super Bowl commercial to introduce their company on a national stage is a pipedream. For Death Wish Coffee, that aspiration became a reality.

The Saratoga Springs, N.Y.-based coffee company -- which claims to be the "home of the world's strongest coffee" -- won the 2016 Intuit QuickBooks Small Business Big Game contest. The grand prize was a 30-second commercial on Feb. 7 during Super Bowl 50, complete with ad agency RPA on hand to help conceptualize the ad. Sources said a 30-second spots cost about $5 million this past Big Game.

"We had 150,000 people hit the site at one time (right after the ad aired)," said Mike Brown, the founder and owner of Death Wish Coffee. "Everything held tight. Nothing faltered. We did get a lot of requests and opportunity rolling in and starting at that point. I've been trying to weed through them."

According to commercial analytics firm Spot Trender's national representative poll of Super Bowl ads, 64 percent of people said that they enjoyed the ad, and 87 percent said they would remember it. More than half said they were likely to buy the product.

The next day, Death Wish Whole Bean Coffee was the No. 1 best-seller in the Grocery & Gourmet category on Amazon.com, and it was two of the top 10 spots in its Movers & Shakers category, meaning the company's sales increased 550 percent in just 24 hours.

Brown said that less than a week after the ad aired, business was about five times higher than typical levels. He was averaging four to five hours of sleep a night trying to keep up with the number of opportunities flowing in.

"We're already at about 50 percent of our revenue last year, which bodes well for this year," he said at the time.

Intuit has only run the Big Game Small Business twice, in 2014 and 2016. Two years after its Super Bowl ad aired, engineering toy GoldieBlox is still feeling the positive effect from its commercial. Sales have increased 7,000 percent since the ad aired two years ago. Before its Super Bowl ad aired in 2014, GoldieBlox was in under 1,000 retailers. By the end of that year, they were in 6,000. Today, they're in over 8,000 stores.

"That was always our dream," said GoldieBlox founder Debbie Sterling. "We wanted to disrupt the pink aisle. The Super Bowl ad helped get us there, which is almost unheard of for a small start-up company like ours."

Sterling, whose first job out of college was for branding agency Hornall Anderson, and her husband and GoldieBlox co-founder Beau Lewis, who previously owned a viral video agency called Seedwell, knew the value of a Super Bowl ad going in. Just entering the Intuit competition and appealing on social media to get people to vote for them created huge publicity around their company, on which they capitalized.

"We have a really strong marketing background, which is why we knew what a big deal the Super Bowl was," she said. "We knew how big of a deal it was for getting our social mission out there, so we definitely went in knowing what a really priceless opportunity it was and the value you get from something like that."

"We wanted to disrupt the pink aisle. The Super Bowl ad helped get us there, which is almost unheard of for a small start-up company like ours." -GoldieBlox founder Debbie Sterling 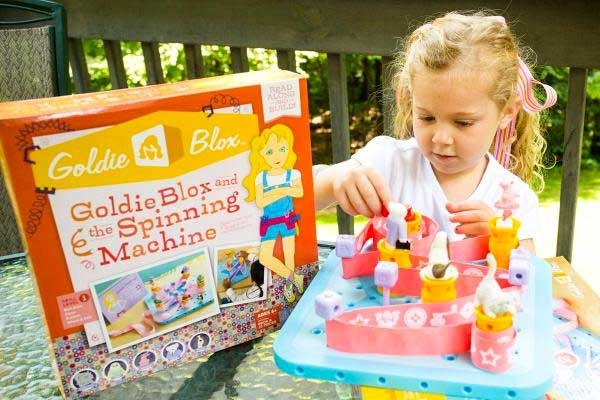 Prior to the Super Bowl ad, the company had also gotten media attention in 2013 for creating GoldieBlox commercial in which it used the toys to create a Rube Goldberg machine. It used the song "Girls" by the Beastie Boys as the soundtrack. The group sued the company for using unlicensed music. Sterling said there was not much she could legally say about the case, other than the company learned "a lot about how powerful music can be and how it can send a strong message."

The Super Bowl ad gave the company the opportunity to stand on its own outside the controversy -- and it did. Immediately after the ad aired, traffic to the website increased 8,000 percent.

She added that after the Super Bowl commercial aired, it not only boosted sales, but the cache and prestige of their brand. It allowed them to think outside the box and go for other marketing opportunities that wouldn't normally arise. For them, it meant getting a float in the Macy's Thanksgiving Day parade.

"In order to truly leverage the Super Bowl commercial, you need to not think of it as the pinnacle, but as a jumping off point of what your next goals are," she said.

Sterling said she does wish she had done a few things differently. Like Brown, she had a number of ads flooding in right after the ad. She wishes she sat down with her team to take time and not get overwhelmed.

"You're not big enough yet and prepared enough yet to do them all," she said. "Getting aligned with the executive team around that and bringing those you can to fruition. That's my biggest advice."

Time will only tell if Death Wish Coffee will have the same trajectory. Things have died down since then, but that doesn't mean business has slowed down.

As of the week of March 20, Death Wish's Brown estimates that orders are still three times higher than before the ad. The company added two additional employees since the Super Bowl commercial, and plans to add two more to reach 15 employees by the end of next quarter.

"I'm running a business that is three times the size now," Brown said. "It's an adventure every day."

Amazon data shows that Death Wish Whole Bean Coffee is No. 34 on the Best Seller list in the Grocery & Gourmet category, and No. 18 in the Coffee, Tea & Beverages category. It has an average rating of 4.7 stars out of 5, with 82 percent of customers ranking it with a 5-star rating.

Brown isn't that stressed about the influx of business. Prior to the Super Bowl, he had created a list of "probable scenarios," "worst-case scenarios" and "best-case scenarios." While everything that has happened doesn't fit neatly into those boxes, it did prepare him for most things. He also created an "opportunities bucket" to help sort through new offers.

"Just be open minded and take things one day at a time," he said. "It's almost daunting thinking back. I made a point to tell myself to enjoy the process. I said if I wasn't going to enjoy it, why would I do it in the first place?"

Even Intuit has learned from the experience. When it rebooted the program in 2016, it combined the program with its Own It network and its QuickBooks Connect conference. Own It is a platform that allows smalls business to connect with each other.

"One of the big things we learned that was after the program ended (in 2014) is that the small businesses wanted to continue the interactions with the participants. … This year we put it all (our services) together," said Ken Wach, senior vice president of marketing for Intuit's Small Business Group.

And, Death Wish has been a beneficiary of that change. Brown said looking back a little over a month later one of the best things he did was hire an accountant, whom he met at the QuickBooks Connect convention.

"Hire an accountant!" Brown added. "The smarter the better! Talk to your accountant! Those are the most important people to be friends with!"

Michelle Castillo is a staff writer for CNBC Digital, covering advertising and digital media. Previously, she was a digital media reporter for Adweek, and has covered media and entertainment for publications including the Los Angeles Times, The Hollywood Reporter and Time.

Try Not to Cry After Watching McDonald's New Holiday Ad

5 Ways You Can Sleep Better This Cyber Week

This is the Marvel movie Steve Jobs didn't like