Walking into Abjad Design’s office, the one thing I noticed right away is that the people behind this enterprise loved their work- this was evident from all the illustrations, print-outs and posters of their branding, logo and design projects that were scattered across the walls of the space. Founders Sheikha Bin Dhaher and Diana Hawatmeh set up Abjad Design around the end of 2010, which was when both of them had secured a few years of experience under their belts (Bin Dhaher had done branding work, Hawatmeh worked at a graphic design agency and at an internship in Amsterdam with multilingual designer Tarek Atrissi, and both had worked in publishing houses and their own freelancing stints), and they now felt it was time for them to start something of their own. “The industry here, it lacks the whole culture of a design studio,” says Bin Dhaher, on what prompted them to start their business. “We see big branding agencies, but we don’t see the smaller [design agency] businesses.”

The founders met while studying in the American University of Sharjah the duo is passionate about graphic design, and their relationship with each other has moved from being just friends to business partners. When asked on whether this changed the dynamics between them, Hawatmeh likens a business partnership to a relationship between a couple: “They have their differences, but maybe it’s the differences that makes them better.” At some point, there’s bound to be challenges- Bin Dhaher says this definitely happened with them at the beginning, however she says that “through experience and time, you learn to accept the person and understand- it becomes like a balance, so this person complements you as this, and you complement this person in this.” 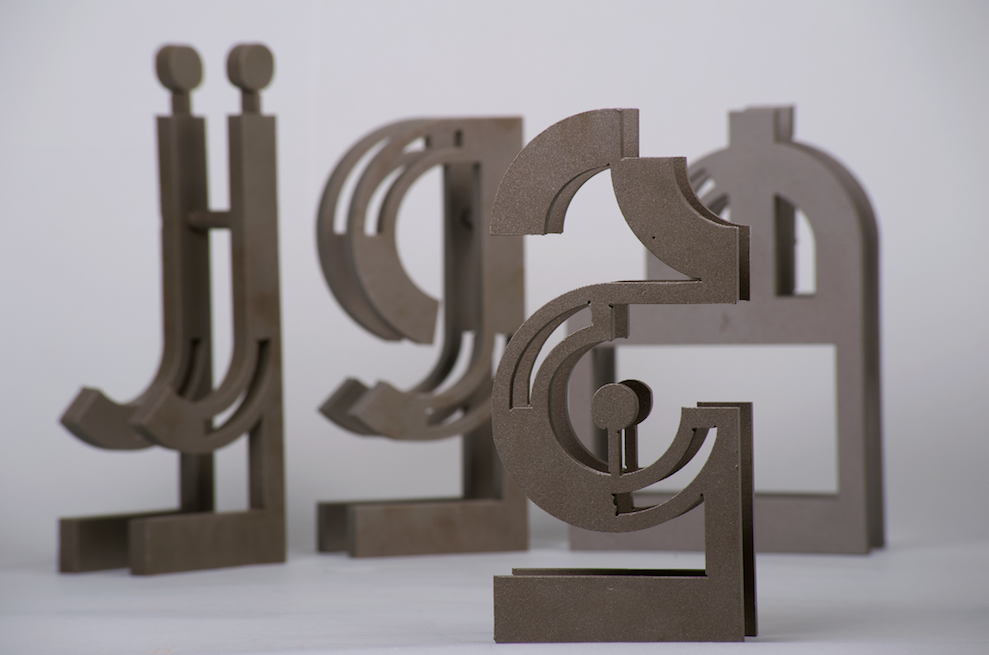 Having thus been able to establish a harmonious relationship, Hawatmeh adds that these days, Bin Dhaher concentrates on art direction, and while she still does that role too, her focus is more on business development, with both also aiming to foster an efficient working environment for their growing team. One of the ways they do this is by going to conferences, such as ING Creative, a creative event with talks and workshops from renowned artists and speakers, to keep everyone creatively motivated and give their graphic designers and team members “room to grow,” with Hawatweh saying, “Sometimes, they need to figure out the solution by themselves to be able to compete with their other designers.”

The duo also had their fair share of startup hurdles, especially in the beginning, as they were setting up. Without a business education background, they’ve learnt on the go, with some guidance from their family members who were more adept and experienced in business. A family member, Dhaher bin Dhaher, who is a current silent partner, was helping them out, and has continued to advise them on business strategy, as well helping with connections and workspaces. As is the case with most startups, hiring was also an issue, since they didn’t have a big budget for salaries. This prompted them to hire interns, which turned out to be a good decision, as a lot of the interns ended up working with them, or even just freelance for them. 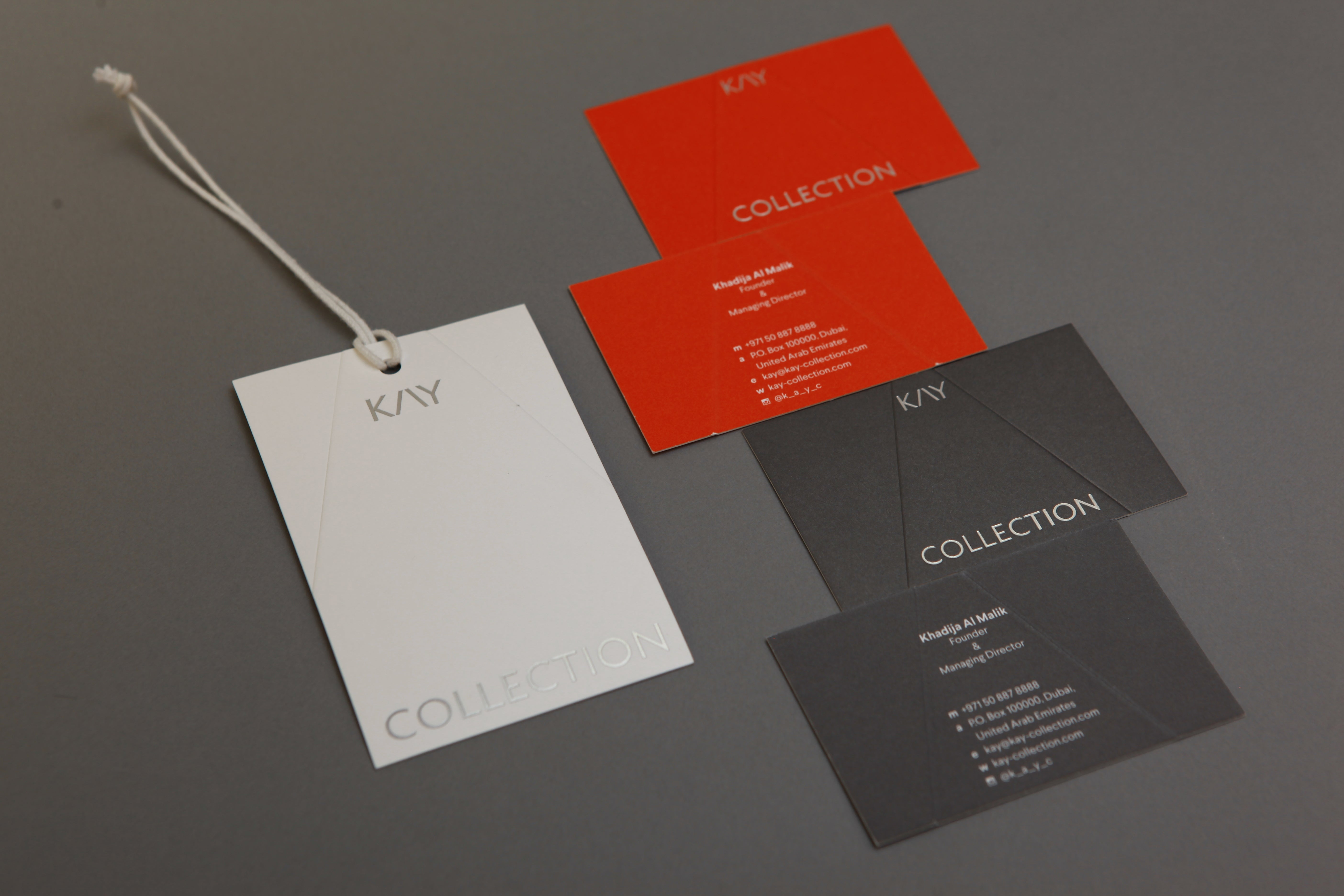 But while starting up might have been difficult, the founders have done pretty well in the six years of their business’ operation. They say they have received offers from a couple of entities who are interested in partnering, however Bin Dhaher asserts that “we are very particular of who we work with, because Abjad [does] very niche work.” To work with a partner, Bin Dhaher adds, “We’ll have to go for someone who understands our culture, understands our style.” Though she hopes to never need an investor, as the co-founder hopes to “build everything by ourselves,” Bin Dhaher hopes that, when they want to expand in a few years, they will find an investor who “believes in us,” one who understands their business to ease the transition.

Looking into the portfolio of Abjad Design, the graphic design studio has various expertise such as logo work, illustration, web, branding, spatial design, time-based design, print work, packaging, product, invites/greetings and information design. When I ask the co-founders to describe their brand, they say, “conceptual, clean, modern,” which varies per project: “You learn and develop a style that is simpler- it becomes more conceptual.” And from their works with brands, museums, galleries, F&B ventures and projects like Abu Dhabi Art 2015, RTA Dubai’s annual report 2013, Dubai Design & Fashion Council, Candylicious’ web design and Ara Gallery, they have stayed true to their brand ethos. 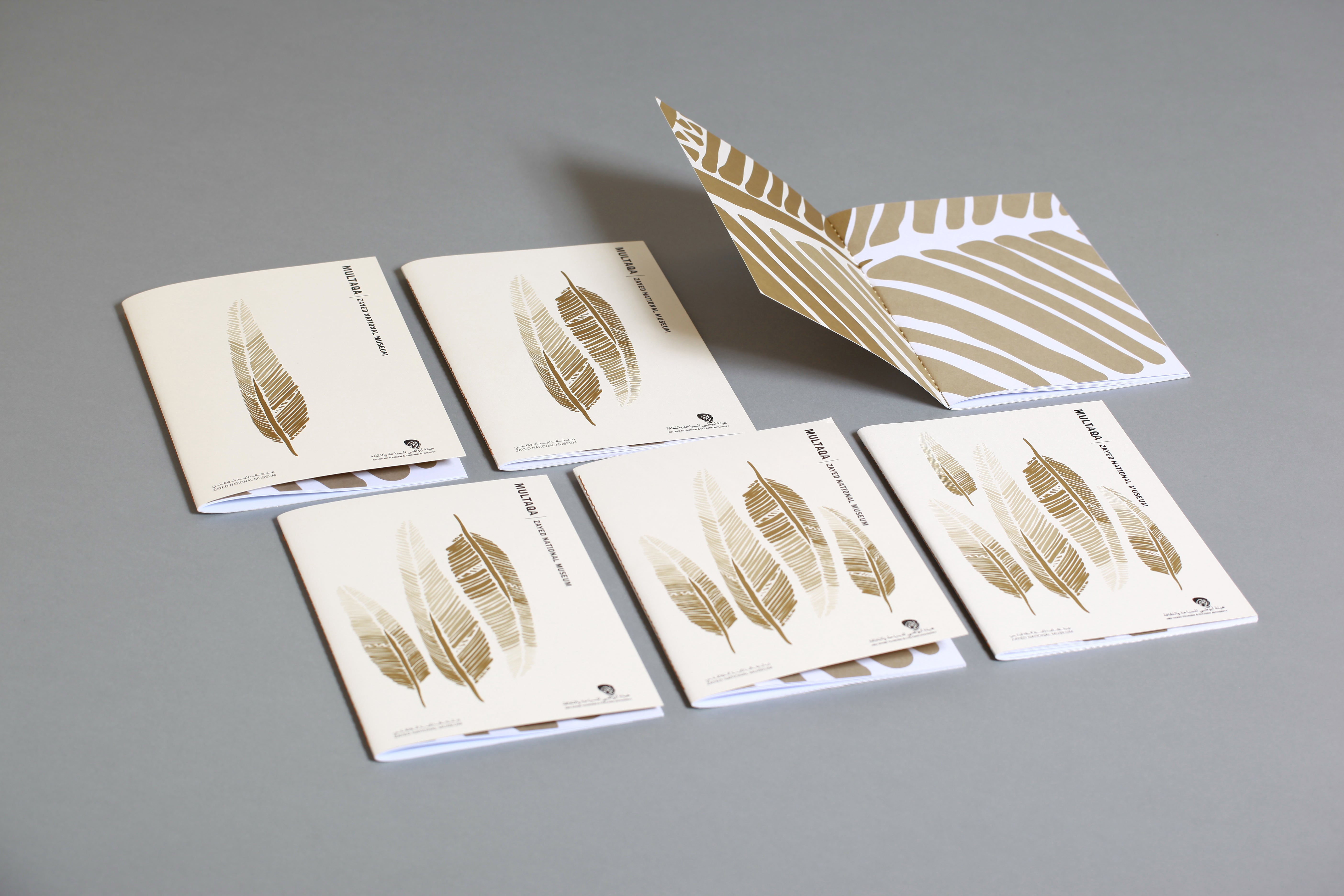 Another detail I noticed was their knack for bilingual design, and being strong both in English and Arabic typography is an attribute that they count as one of their strengths and business value. “A lot of people do it here, but they do it badly,” says Bin Dhaher. “For example, the English looks really good, and the Arabic looks really bad,” noting how “the strokes are not correct- the Arabic looks more sloppy in the way it’s done… It’s more like an afterthought.” Bin Dhaher reasons that perhaps it’s because most designers study abroad and aren’t exposed to a lot of Arabic typography or even Arabic design, “so that’s why when Arabic get executed, either people lack the knowledge of the actual script or the language, or people [sic] who are Arabs, but not yet exposed as much to dealing with Arabic type.”

But the times are changing, and Bin Dhaher notes that people are now trying to make Arabic look good again. She says that this has been the case especially with regional startups (usually in the fashion and F&B sectors), wherein even without a background in graphic design, they’re keen to create something interesting, as well presenting examples in mood boards for the designers to emulate, and what they usually choose is aligned to how Abjad Design would work with too. 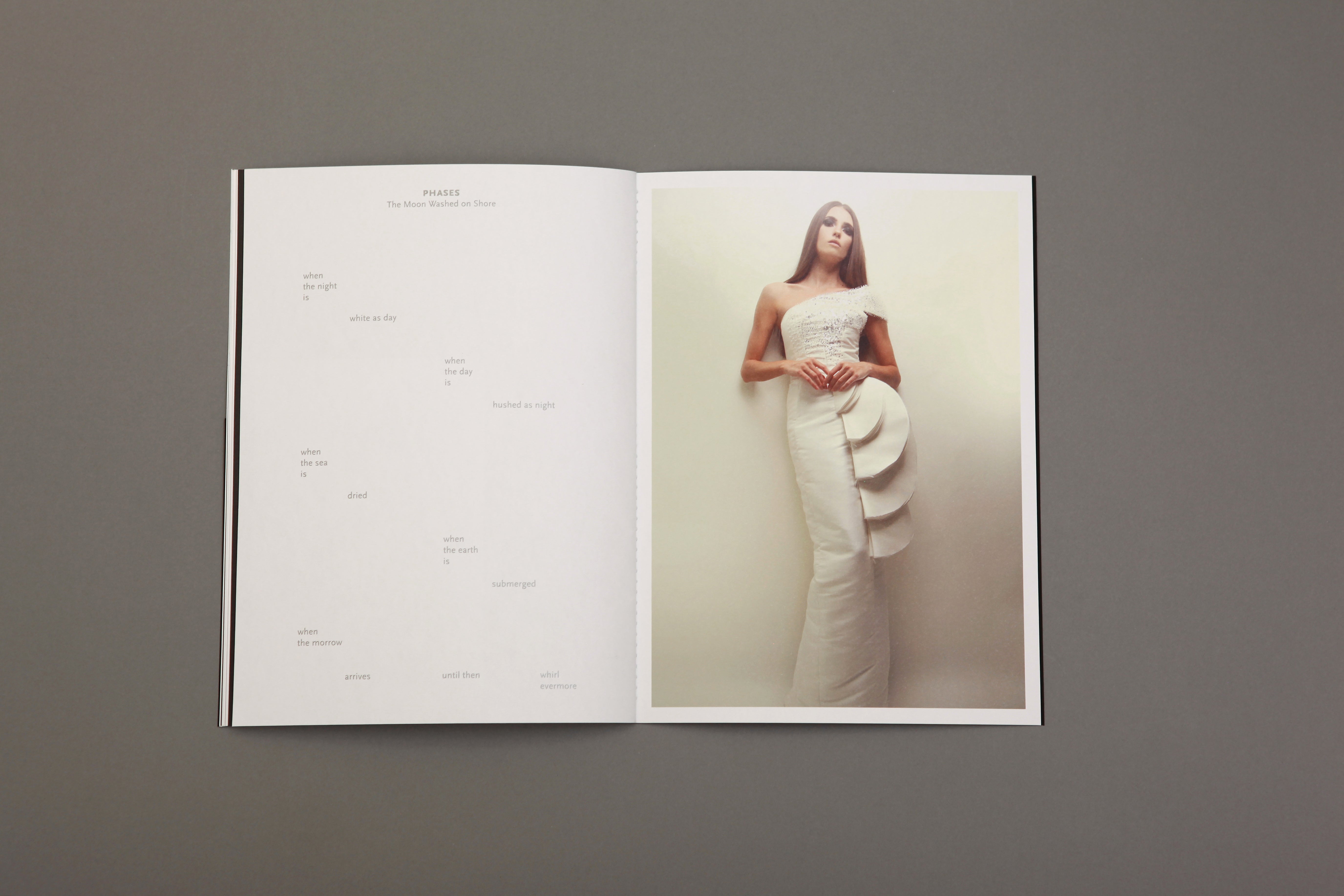 When it comes to startups developing their branding identity, the duo suggests startups should know what they want and do their research, and most importantly, “know [your startup’s] message and why you’re doing it.” Creating clean and minimalistic work is something they try to promote as well. “I feel we can do both, it really depends on the actual requirement. We are adaptable. We adapt to the brands, and to the needs,” Hawatmeh explains, “because each brand has its personality, its own story.”

When asked about lessons they’ve learnt in their six years of operation, Bin Dhaher says, “We’re still learning, to be honest,” recalling how they did everything or taught themselves in the beginning, from accounting to managing teams before starting to hire more team members, and especially on building terms and conditions for creative work they created, in lieu of the copyright laws in the UAE. They’ve also learnt how to deal with people better, be it designers or clients. “The learning doesn’t stop,” Bin Dhaher reiterates. “No matter what degree you have, it’s always good to keep yourself informed.” As for the design culture in the MENA: “I think we just need to give it time, it’s very young,” comparing the region’s scene to other parts of the world, where it’s booming. 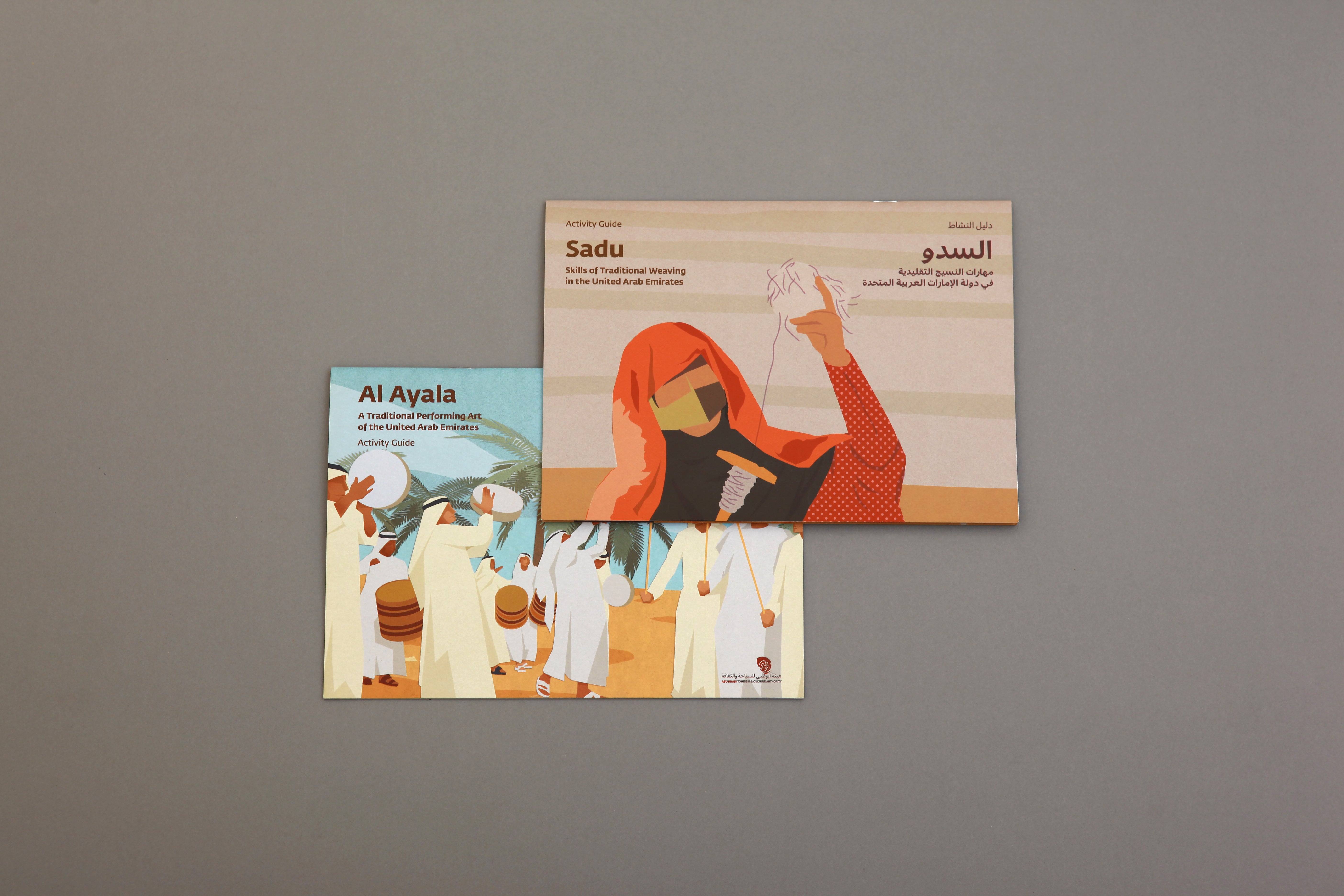 But while their startup grows and expands, the founders have also made it a point to give back to the design community through teaching workshops, and they have collaborated with art conferences such as ING Creatives to conduct workshops on designing Arabic books and typography, with an upcoming one in September too with Tashkeel. 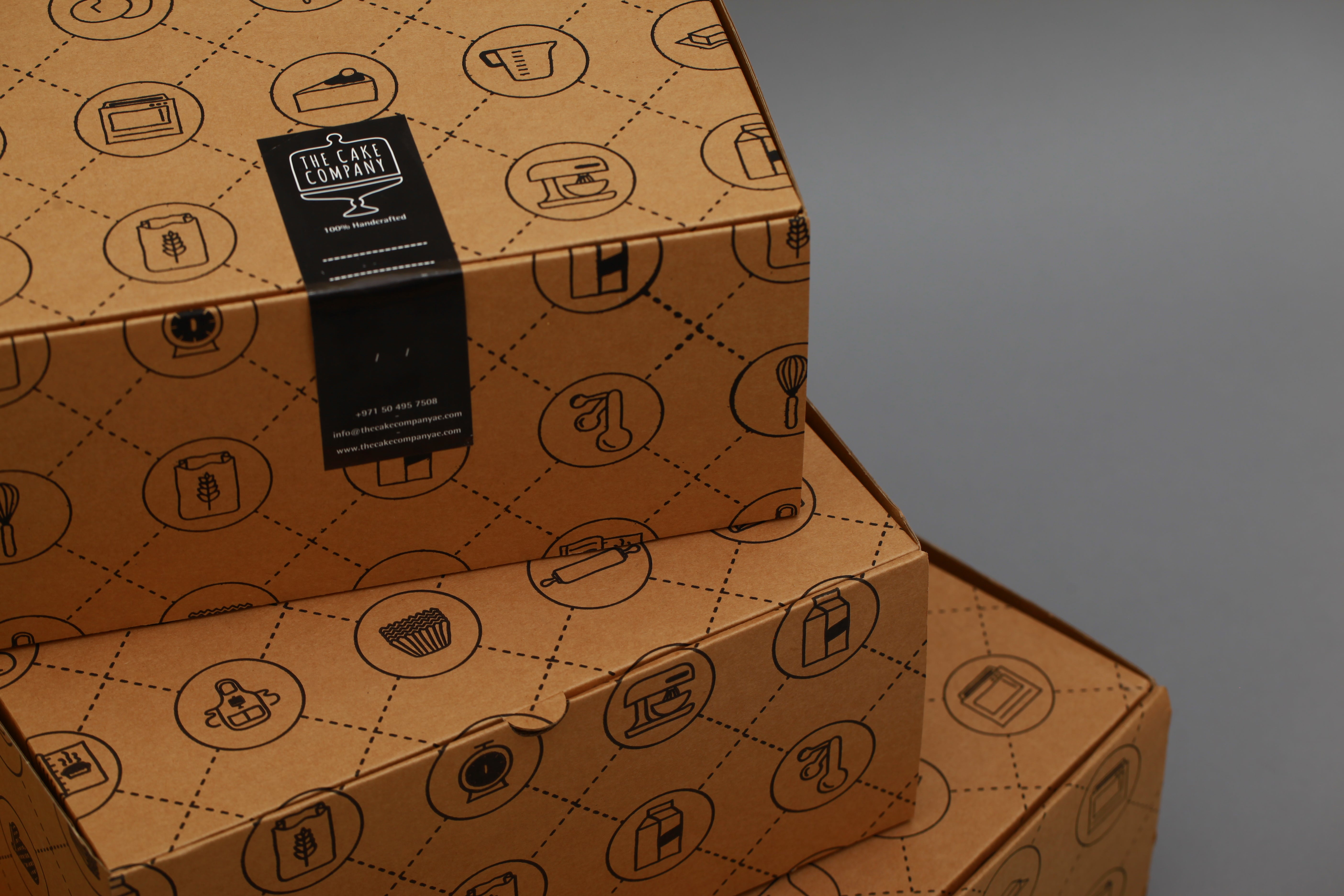 WHAT IS THE ABJAD TEAM PLANNING TO DO NEXT? ARE YOU, AS CO-FOUNDERS, GOING TO VENTURE OUTSIDE YOUR SPECIALTY?

“We hope to work on more cultural projects on an international level. Coming from the Middle East, we are used to importing talent from the outside; we’d like to change the common perception that everything from outside is better. We’d like creative Arab talent to rise from its point of origin and spread outwards. Perhaps, one day Abjad can be more than a design studio. It may incorporate an educational platform, a space for workshops or even a type foundry. Who knows?”

WHAT’S IN THE PIPELINE FOR ABJAD DESIGN IN THE SHORT-TERM?

“In the next few months, we’ll be conducting an Arabic design workshop at Tashkeel [Art Gallery] and other places which are yet to be confirmed. We will also be launching our online store very soon.“