By Pamella de Leon December 14, 2016
Opinions expressed by Entrepreneur contributors are their own.
You're reading Entrepreneur Middle East, an international franchise of Entrepreneur Media.

Finding a particular detail in your notes after a long brainstorming session is often like trying to find a needle in a haystack- and yet, such notes are essential in one’s ability to deliver on the important action points from a meeting. A new UAE-based startup Wrappup is now trying to alleviate this particular point for executives. While at Bain and Company Middle East, Wrappup founder and CEO Rami Salman -whose background is in management and strategy consulting- was in a meeting with other execs, and he noted how, when the CEO said something important, everyone struggled to pay attention to what was being said, as they were also trying to note down information at the same time.

At that moment, Salman thought: “Hasn’t technology already solved this? Why wasn’t there a tool that could record discussion, flag important moments, playback those important moments to write your notes [at a later time], and send it out to all participants for reference and review?” With that idea in mind, Salman decided to attend Angelhack Dubai Hackathon 2015, which was where he met his co-founders Lead Back-End Developer Ayush Chordia and Lead Front-End Developer Rishav Jalan, and together, they built a fully working prototype of Wrappup- in less than 24 hours.

Salman sees Wrappup as a panacea for results-oriented meetings, and saw its potential value as he started using it in his own meetings at Bain: “I was able to summarize very complex technical discussions in a pinch. I could summarize a two-hour complex steering committee in 10 minutes in the car ride back to the airport. I figured, how many meetings could improve if they used this product?” The app works by letting users mark significant moments instead of scribbling down notes. 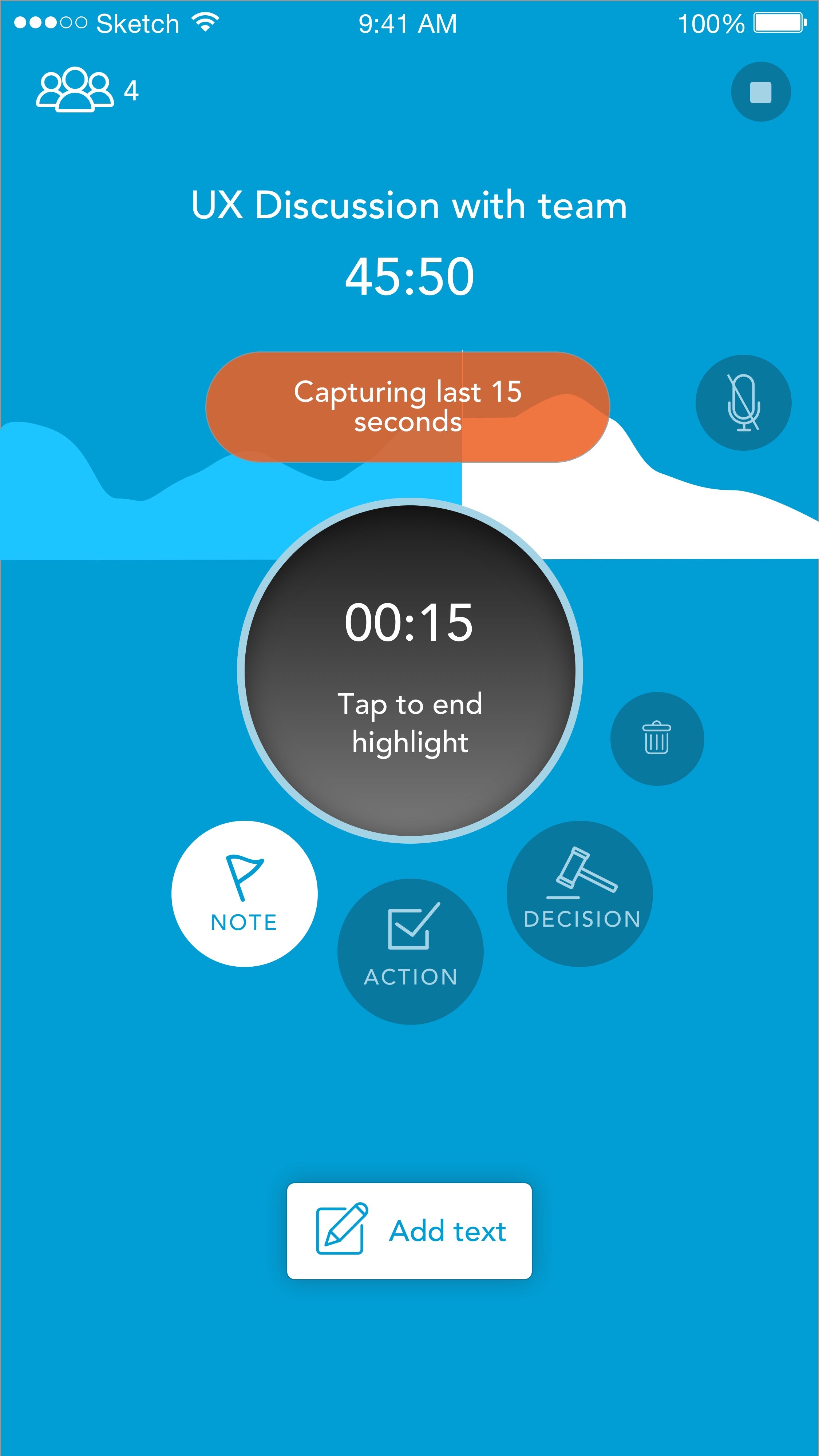 These moments can be tagged as actions or decisions, letting users add quick notes for reference. The app then compiles these moments into a playable minutes-of-meeting that can be shared with team members. Using Wrappup’s Speech Search, users can mark words in discussion and the keyword tag would categorize discussion highlights. Elaborating on the app’s USP, Salman says, “Wrappup is surfacing useful business data by categorizing, indexing and analyzing speech.”

As well as with the app’s proprietary speaker recognition algorithm, Wrappup uses machine learning to identify who is speaking throughout a meeting based on their “voice-print,” segmenting hours of discussion by speakers, and even lets Wrappup build efficiency metrics based on speech content for each person.

The team also invented a crowdsourced mic for the app: “In Group Record mode, multiple phones around a table can match recordings from different locations in the same room so precisely that they are merged into a compounded audio track, [and] each smartphone can now be used to extend the range and clarity of voice recordings for larger boardrooms.” 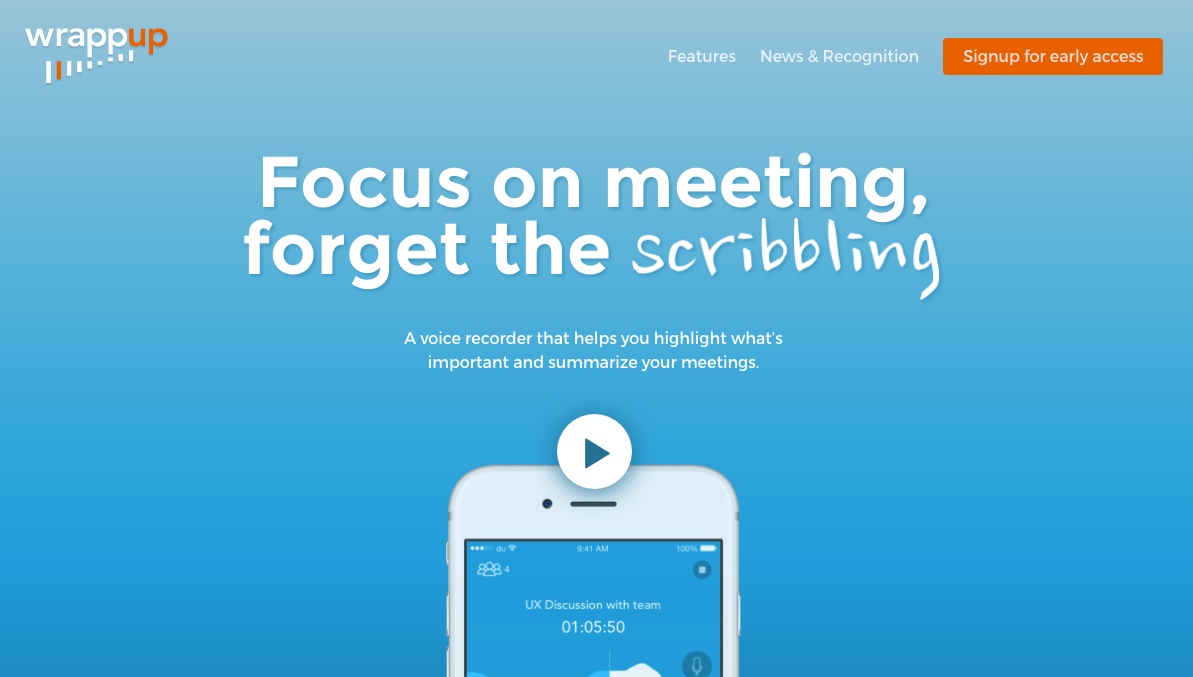 And Wrappup’s efforts haven’t gone unnoticed- the team recently raised seed funding of US$800,000 with quite an impressive list of investors: BECO Capital leads the round, joined by 500 Startups, Arzan VC, Dubai Silicon Oasis, Dubai Angel Network, Hala Fadel, WOMENA and Odin Financial Advisors. Since securing its funding in June this year, the team has been in redesign mode, and are currently launching their private beta app in batches for users who signed up for early access.

Though it’s still in pre-revenue phase, Salman says there’s a high demand for Wrappup’s offerings, but the startup is currently “hyper focused on building a useful product,” and so, for now, the team is looking to patiently grow its user base while listening to customer feedback for new iterations. Salman and the team plan to deploy Wrappup as a freemium SaaS product for individuals and as for SMEs, its core features will be available for free, while certain functionalities will be available on a premium plan.

For larger enterprises, Wrappup plans to create custom solutions and licensing deals varying the company’s needs. Prior to its funding, Wrappup was bootstrapped by Salman for a year, and it was after noticing that the team’s product experience didn’t match their expectations from a UX perspective, and seeing how users expected the app as a cross-platform experience, that the startup decided to seek external funds. Dubai was an obvious choice to do this, as Salman says that being in a close-knit community, the opportunities of connecting with major players is rather quick: “The appetite to support such an endeavor is tangible in the region, and we want to take advantage of that.”

Monetary value was not just the factor they considered, but the value investors can bring to the company. “You need to be able to identify what your startup’s deficiencies will be as you push for your ultimate goals,” he explains. “Then, you can look to investors and advisors to fill those gaps, as well as raise the bar.”

On challenges they’ve faced developing the app, Salman and Jalan agree it was discerning what drives a psychological habit change, to getting users from naturally taking notes during a meeting to using the Wrappup app. This pushes the team to improve the product constantly, with Jalan saying the team has hackathons every few weeks to test or implement new features, and by doing so, build an MVP and get feedback. Chordia adds building a platform to use speech as data was a hurdle, plus utilizing AI and natural language on speech was a nascent space too.

Salman also highlights the team’s diverse skillset- Jalan’s Android developer skillset led to the team starting work on that operating system first, and Chordia’s expertise was in machine learning and AI, so they, as Salman puts it, “unleashed him” in that particular space. They’ve also narrowed their focus to mobile only for now, as it’s the platform they’ve invested in learning about. “Technology can only be an aid to a product, unless it doesn’t satisfy their innate need, people won’t come back on the platform. This means, we have to continue evolving ourselves and build based on what our customers are saying,” says Chordia. 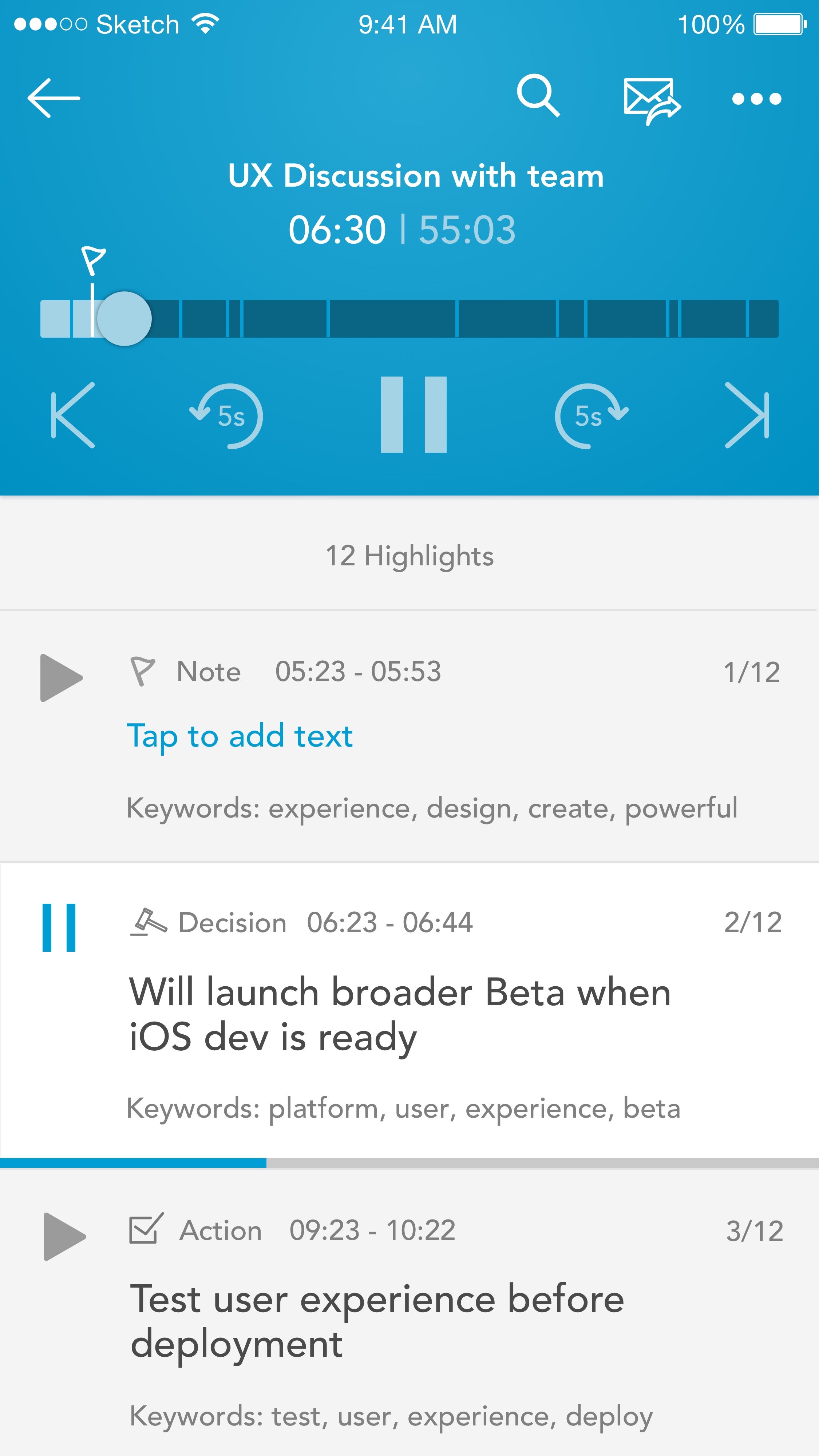 A pivotal lesson that Salman points out of working in a startup is the “emotional rollercoaster of your day-to-day,” as opportunities can turn to disasters and vice-versa as well. “You constantly have to tap into that initial enthusiasm to keep yourself going, even much later in the game. You have to use that positive energy to push through the downs and celebrate the ups.”

So, what’s next? Salman says Wrappup’s end goal in the meeting space is to incorporate the app as an “AI secretary for meetings.” Beyond that, Chordia adds that they see Wrappup as a platform that can be embedded across many verticals, which seems quite possible, as it is already being used in education, conferences and media interviews. “The vision is to make Wrappup a companion in people’s life to make their life better by providing actionable insights from their interaction.”

Hiring and growing the startup’s private beta program is the team’s central focus, as they continue to look for partners that can add value to the app, while also accepting applications for teams or individuals who want access to the app. Planned beta cycles will continue, as well as integration with other platforms for web/online meetings and connecting with products like Asana and Slack. And plans for the long term? “To destroy meeting inefficiency forever.” We certainly like the sound of that.

Related: Making An Impact On The MENA Startup Ecosystem: What We Learned, And What We Predict

Rami Salman, founder and CEO, Wrappup, offers his tips to pitching to investors

1. KEEP IT SIMPLE, STUPID “Simplify your message to start, and grow from there. Investors get pitched wild ideas multiple times a day- let them grasp something simple about you to start.”

2. KNOW WHO YOU ARE PITCHING TO “Learn about the people in the room. You need to understand what the investors are looking for and what makes them tick.”

3. DEMONSTRATE YOU R DRIVE “Don’t show them passion; show them determination. Determination turns passion into reality, no matter the obstacles and turns along the way.”

4. WELCOME FEEDBACK “Demonstrate awareness and maturity during a Q&A. Don’t defend everything, tell them what you don’t know with confidence, and show them how you plan to tackle it.”

5. KEEP IT REAL “Be yourself. If you’re funny, crack a joke; if you’re a geek, show them how geeky you are. Investors can smell ingenuity and might not like it if you’re faking it.” 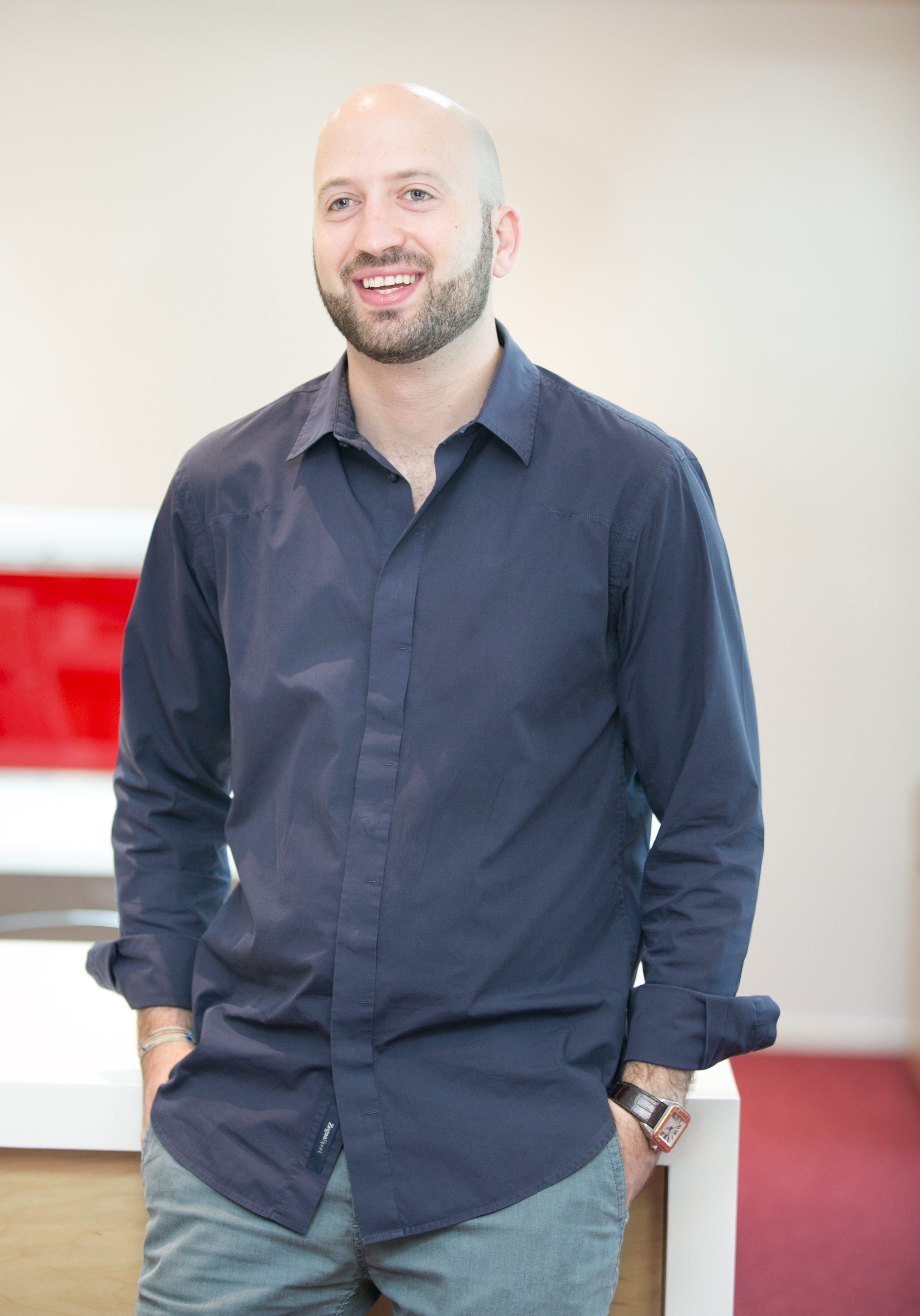 “Focus on applications that have frequent utility. Have a clear strategy on how you will be able to stand out from the crowd of applications and reach your target audience. Don’t overthink your product, the simpler the better. Make sure you have the right engineering and domain expertise to execute your plan. Spend time interacting with potential customers to understand their needs before building something that they may not use.

We chose to invest in Wrappup because we believe in the founding team and felt that they had the focus and domain expertise to execute on their plan. We resonated with the value proposition that they’re providing in meeting management and think that the application has a large addressable market, with the potential of being a global solution. In addition, if done properly, the software has the capabilities of becoming defensible through lock-ins with businesses once they are used in meetings and are able to disseminate insights on behavior and productivity, which will allow them to create more efficiency in the workplace.”

Making the Move from Medicine to Entrepreneurship