By Carole Khalife
January 31, 2016
Opinions expressed by Entrepreneur contributors are their own.
You're reading Entrepreneur Middle East, an international franchise of Entrepreneur Media.

Whether we like attending them or not, meetings are pillars of the corporate world. Yet despite their importance, we are, much of the time, doing them wrong. Poorly organized, too frequent, no clear takeaways, and so on.

More than 10 million business meetings are held every day in the United States. Is that a useless stat? Not when you consider that it translates into a cost to companies of around $37 billion in lost productivity every year, due to the fact that anywhere from 25-50% of those meetings are ineffective or unproductive in nature.

It's not a problem we can entirely fix. Let's admit it; most of us humans are simply not all that good when it comes to focusing or driving things in an organized manner with clear goals and outcomes. For meetings, this requires selecting the right attendees, choosing the right time and place, knowing what to cover (and just as importantly what not to), and then steering the discussion accordingly.

You will spend as much as 37% of your work-related time in various consultations, and so whether you are a regular driver of meetings or a regular attendee, it's worthwhile being aware of how this can all be better managed. And remember that a big part of this is also about managing stress in general, which we are in dire need of here in the Middle East. Evidence of this can be seen in a recent workplace survey by Towers Watson, where work-life balance was cited as the biggest factor at play in the rising stress levels seen across the region.

With that in mind, let's take a look at what the experts have to say and what the research has to show about running better meetings, as well as a few tips and tricks to shake things up towards a more positive result.

1. Don't be too quick to call meetings

Let's start at the root of the problem, which are too many meetings in the first place. How many of us are playing constant catch up on our work duties because of all the time spent in meetings? Think twice before calling that meeting and be firm about not attending meetings you either don't need to be at or don't see the value in. Research tells us that the more meetings employees attend, the more fatigued and under pressure they feel, which translates into less productivity on the whole– and as mentioned at the outset, that itself can translate into huge cumulative costs for a company.

It's necessary to not only let people know in advance the high-level details of the meeting, but to also provide any documents or other information that will help attendees better prepare themselves. For the more complex issues, people may need time to reflect on things in advance, which could even involve carrying out research. Give them the chance to do so by providing upfront materials, and they will then be in the best possible position to contribute during your meeting.

3. Know what you need to get out of it

Having a poor agenda, whether it's too vague or too repetitive, can kill a meeting. Without the direction provided by a good agenda and a strong facilitator to provide the necessary structure to the meeting, people can wander off topic, or not contribute at all. The solution? Believe it or not, it's not getting a leadership-type personality to drive things. It's rather, quite simply, knowing what the purpose of the meeting is (and reiterating it to the attendees), and being 100% convinced that it is necessary. With that as your foundation you'll have a much better chance of putting that agenda together in the right way and controlling things throughout.

4. Know whom to invite

Sending out mass invites and cramming the room with bodies is not a good idea. You need to invite those who are key to the issue or who will add value with their knowledge or experience – the rest can get a summary afterwards if even necessary. Again this goes back to the mention above about the total economic cost of meetings. Amazon's Jeff Bezos likes to stick to the "Two Pizza" rule to make sure he gets this right: a meeting should not have more people than can be fed by two pizzas! Now let's do the math real quick: Amazon is headquartered in Seattle, and the most popular pizza delivery chain in the United States is Pizza Hut. Pizza Hut has 12 slices for every large pizza, so let's say 4 slices per person. According to Bezos, then, you don't want more than six in your meetings– and that includes you. Sounds about right.

A no-brainer, right? Well, it's not quite that simple, because it's estimated that over a third of all meetings start late– meaning you don't want to take starting on time for granted. Late arrivals create instant awkwardness and the potential for constant disruption, with the facilitator often having to stop and recap what was said so far. The ideal way to solve this is to let it be known that your meetings always start at the communicated time and anyone not there on time will have to skip it. So as not to make it sound too harsh, simply communicate in the email invite that you understand there may be legitimate reasons for showing up late, but in such a case –out of respect for the others– we do not want to have interruptions caused by late arrivals. You can always say that a recap will be sent after the meeting to anyone who didn't manage to get there on time. 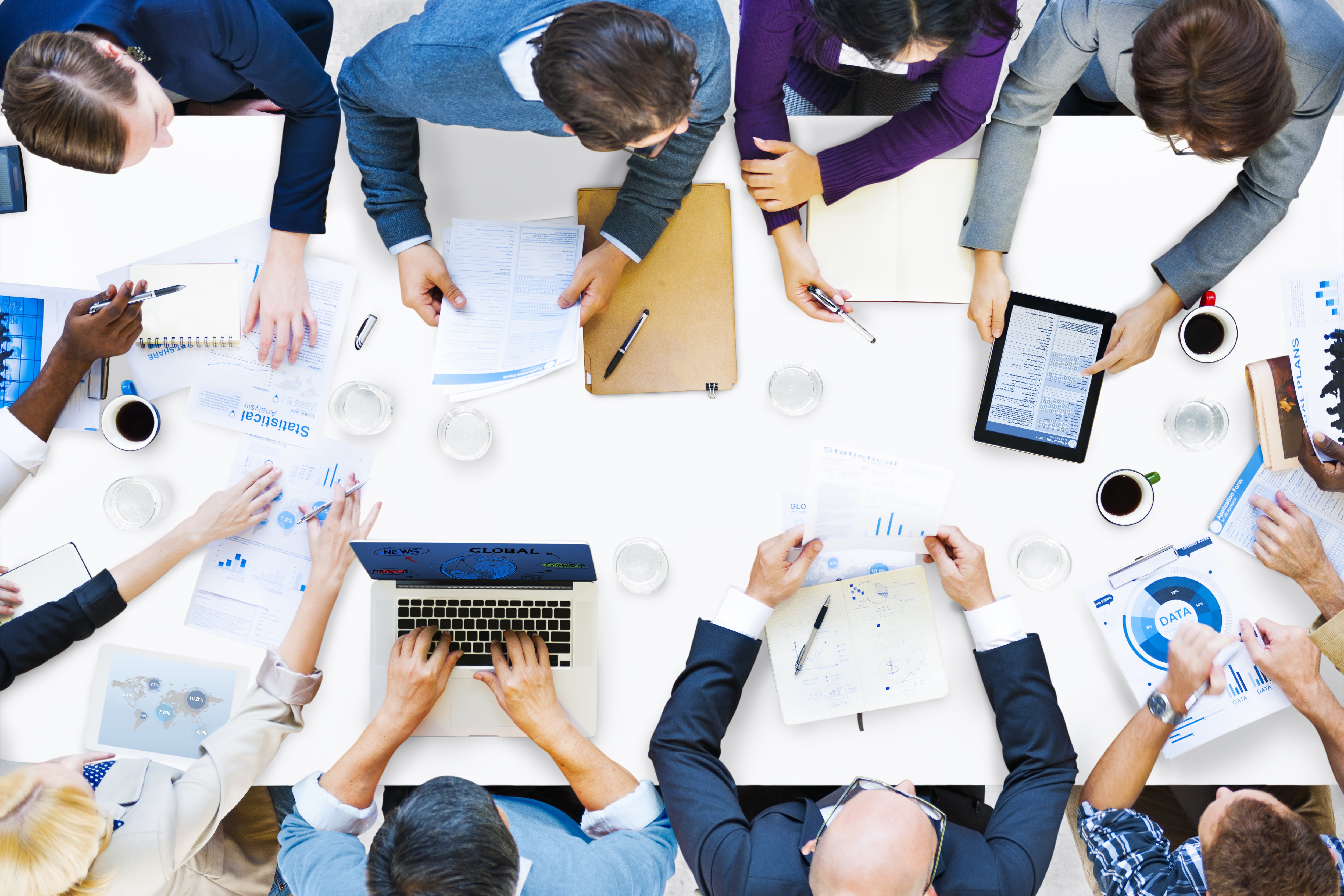 It's recommended to set a few ground rules with respect to meeting etiquette. For example, let people know that there should be no interruptions or side conversations, and also stress how important "constructive feedback" is and what it looks like. We want people to speak their minds and put forth their opinions, but it is key to set the right tone and make sure a challenge to an idea does not come off as being rude, personal, or offensive in any manner. It's after all about results, and that comes through a healthy dialogue, not through an accusatory one.

7. Don't linger, and keep meetings as brief as possible

Facebook's COO Sheryl Sandberg has a refreshing approach to meeting duration. Paying no attention to how long the meeting is booked for or due to run, she wraps up as soon as possible each time by calling the meeting the minute the final point is covered. Cutting meetings short once the agenda has been covered has been shown to leave employees with a more positive attitude about future attendance. People have an acute sense of when their time is being wasted, and a recent study found that 47% of workers consider excessive meetings and meetings that go on too long to be the "biggest waste" of their workplace time. Also along these lines, it is in general always better to keep meetings as brief as possible, so when creating your agenda do not add things that do not need to be there and do your best during the meeting to cover points with efficiency– perhaps setting a maximum time limit for issues that have the potential to drag on if allowed.

Incredibly, over 70% of employees have admitted bringing other work items to meetings. Of course we have all seen this: we are talking and someone is checking their phone. Is it fair to ask people to not bring their mobile devices to your meetings? Sure it is. In fact it is the only way you will stay in control of your meeting. It is simply impossible to drive a meeting effectively when you have to contend with people hopping in and out mentally due to other distractions. And it is, to be blunt, of the utmost disrespect to you. Remember, your meetings, your rules, and if you are an attendee and you have the option to bring your mobile device, don't.

Sometimes meetings drag on, and if you are anything like me, it's hard for you to sit still. So do encourage attendees to move about during meetings. To keep things somewhat orderly, encourage whoever is speaking at the time to stand up and move about, then sit down again after wrapping up. Fun fact: 39% of employees have confessed to falling asleep during a meeting, so this might also help lower that rate somewhat.

Resist the temptation to drown your meeting participants in a sea of PowerPoint slides. How this ever caught on is a mystery, and nowadays people simply use it as a crutch. To paraphrase Steve Jobs, "PowerPoint is for people who don't know what they are talking about." If you have to introduce charts or graphs –or anything for that matter that you need visual support for– then show it only when needed. Try and avoid using PowerPoint as a sort of "guided tour" to communicate what you have to communicate, as it will only distract. It will be all eyes on the slides and none on you, with the attendees not sure what they are taking in. You are talking while they are reading your slides, and that simply does not work. By all means have notes to keep yourself on track, but those are for your eyes only, not for others to see.

Finally, what happens at the end of and following the meeting? Will you detail clear "next steps" or "takeaways", and will you then follow up on them to ensure all was completed as promised? If the point of the meeting is to decide on actions to take and those are then not done, the whole meeting would have effectively been a waste of time.

So, can you change the meeting culture at your company? Let's first see if there's a need for it. Those at the manager level and above often attend in excess of 60 meetings per month. If we estimate an average of one hour per meeting, it means management-level employees are spending more than a third of their working lives in meetings. Let's say for argument's sake those are all necessary meetings. Fine. But given what the stats tell us about the overall effectiveness of meetings in general, we know that there is a lot of productivity loss going on here.

So what do we do about all this meeting chaos? On a personal level, you can ensure that any meeting you call and chair follows some of the basic rules and advice given above. But we also need to do more than that, so on the company level, it's worth petitioning HR to set some guidelines here and provide education on how every employee can drive better meetings– as a regular meeting chair or attendee. While it's a very easy problem to continue to ignore, the productivity losses and overall frustrations associated with ineffective meetings means it's time for significant action to be taken.