Infographic: The Growth Of Entrepreneurship Around The Globe

By The Infographic.ly Team January 26, 2017
Opinions expressed by Entrepreneur contributors are their own.
You're reading Entrepreneur Middle East, an international franchise of Entrepreneur Media.

In today’s complex economic environment, entrepreneurship and innovation have been key in establishing a new status quo that shies away from the Pareto efficiency model. As the famous economist Joseph Alois Schumpeter said: “Carrying out innovations is the only function which is fundamental in history.” Had he been alive today, Shumpeter would’ve witnessed his “entrepreneurship theories” come to life, as the landscape of today’s economy accommodates more startups and entrepreneurs and more VCs.

In the US alone, the number of on-campus entrepreneurship programs offered in universities has increased from 180 to 2000+ between 1990 and 2014. 27 million Americans are starting or running new businesses. It comes as no surprise that the US itself tops the Global Entrepreneurship Index (GEI) due to its attractive ecosystem, resources and infrastructure. On a global scale, top performing countries present in the same list include, Switzerland, Canada, Sweden, Denmark, Australia, UK & Ireland, Netherlands. The United Arab Emirates ranks 19th with an index of 58.8.

Another major entrepreneurship indicator is VC activity. Indeed, in the past two years, the total value of VC activity has been steadily growing from US$55 billion in 2013 to US$148 billion in 2015, experiencing almost a three-fold increase. The US dominated in terms of numbers of deals and total value: 3916 deals and US$72.3 billion. It is interesting to note however that two out of three of the most important deals were China-based. The VC activity in China in 2015 totaled US$49.2 billion with 1611 deals, an impressive number when compared to European activity, the latter completing 1598 deals of a total value of US$14.4 billion.

While the “unicorn club” is looking bleaker for recent entrepreneurs to join, continuous “innovative activities” are considered as a sign of a healthy economy and economic well-being, since it inherently develops a country’s general output and increases the “knowledge stock.” However, at the rate at which technology is changing, we now talk about the rise of “intrapreneurs”. They are people with entrepreneurial spirit within companies that take the necessary risks in an effort to keep innovating, and getting ahead of the curve. Check out the infographic below to get a sense of more of the trends being seen in entrepreneurship around the globe. 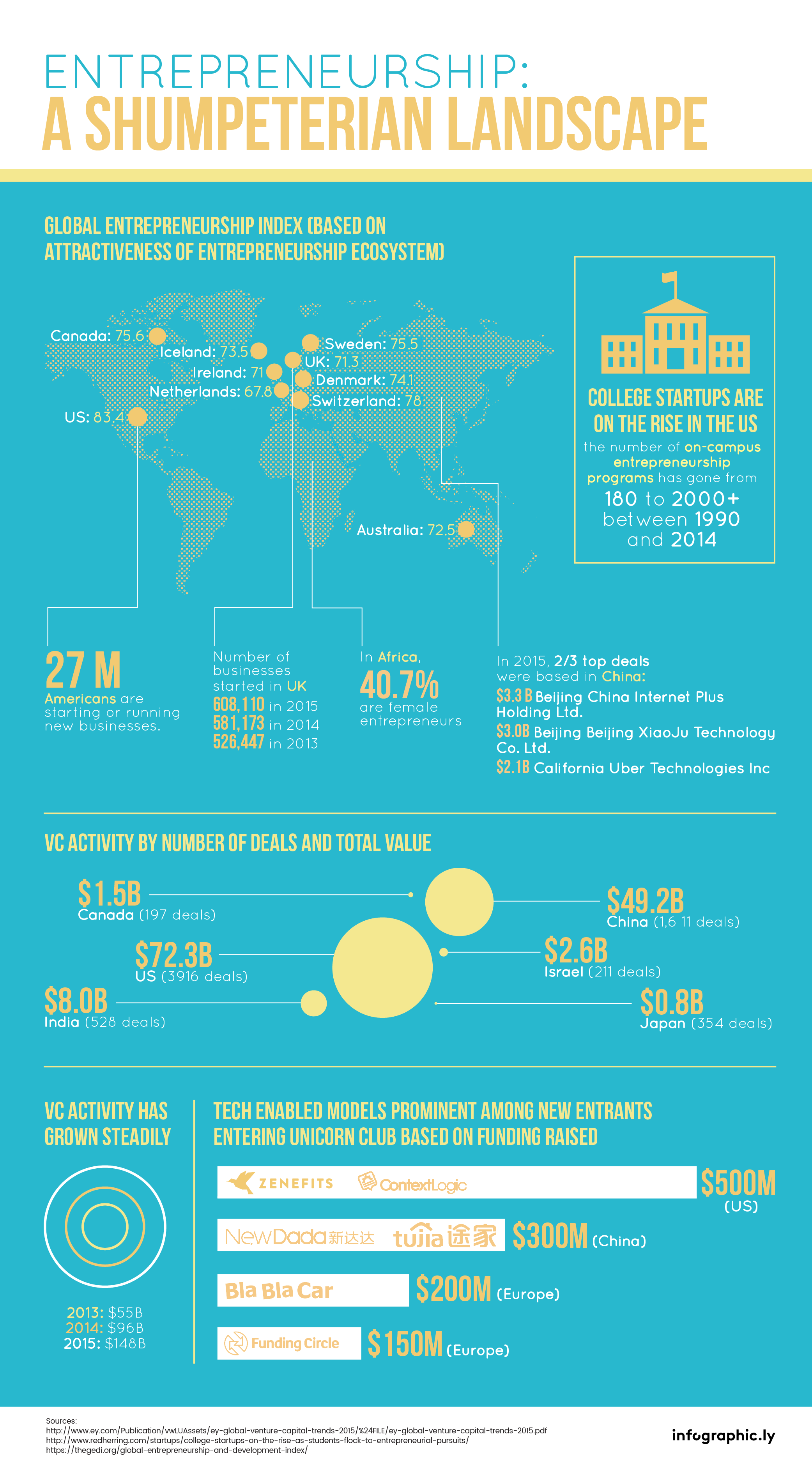 How old are Latin American technology companies? Check out this infographic