By The Infographic.ly Team February 9, 2017
Opinions expressed by Entrepreneur contributors are their own.
You're reading Entrepreneur Middle East, an international franchise of Entrepreneur Media.

When you think of entrepreneurship today, the name Elon Musk almost certainly comes to mind. His name has become not only synonymous with serial entrepreneurship, but also a drive to make the world a better place through technological advancements.

But Musk’s journey to the top of the tech world has not been a smooth procession- it was rather a classic tale of overcoming hardships. Amidst the dot-com boom, Musk founded his first company Zip2 in 1995, a software company for online newspapers, together with his brother Kimbal. Zip2 was sold 4 years later to Compaq for US$307 million. Musk went on to co-found the company that ultimately became Paypal, which was sold to Ebay for $1.5 billlion in 2002. These early successes enabled Musk to start the ambitious space exploration company SpaceX in 2002, with the mission reducing the cost of space exploration and enabling the colonization of Mars. In 2003, Musk also founded the electric vehicle company Tesla. These companies have both been on the brink of bankruptcy in 2008 and 2013, but a swift turnaround of events enabled them to go on. Tesla’s revenue has grown from $15 million in 2008 to $4 billion in 2015, while SpaceX entered into a long-term transport contract with NASA. Besides running SpaceX and Tesla, Musk has also invested in the solar energy company Solar City and in the Hyperloop project, a high speed train that will allow people to travel from LA to San Francisco.

With these achievements, it's easy to see why Elon Musk has gained the respect of the tech community at large. In a recent survey conducted on 700+ startup founders in the US, 23% agreed that Musk is Silicon Valley’s most inspiring entrepreneur, ahead of Jeff Bezos, Mark Zuckerberg and Steve Jobs. While a lot of professionals also regard the South-African born entrepreneur as hot-headed and impatient in light of the failures of SpaceX’s first two rockets, no one denies that Musk ultimately wants to make the planet a better place. In his words: "Going from PayPal, I thought: ‘Well, what are some of the other problems that are likely to most affect the future of humanity?' Not from the perspective, ‘What's the best way to make money?'" Musk’s aspiration thus goes well beyond money, as his ventures have touched upon making the most important aspects of our lives (e.g. environmental and infrastructure) more efficient and sustainable. 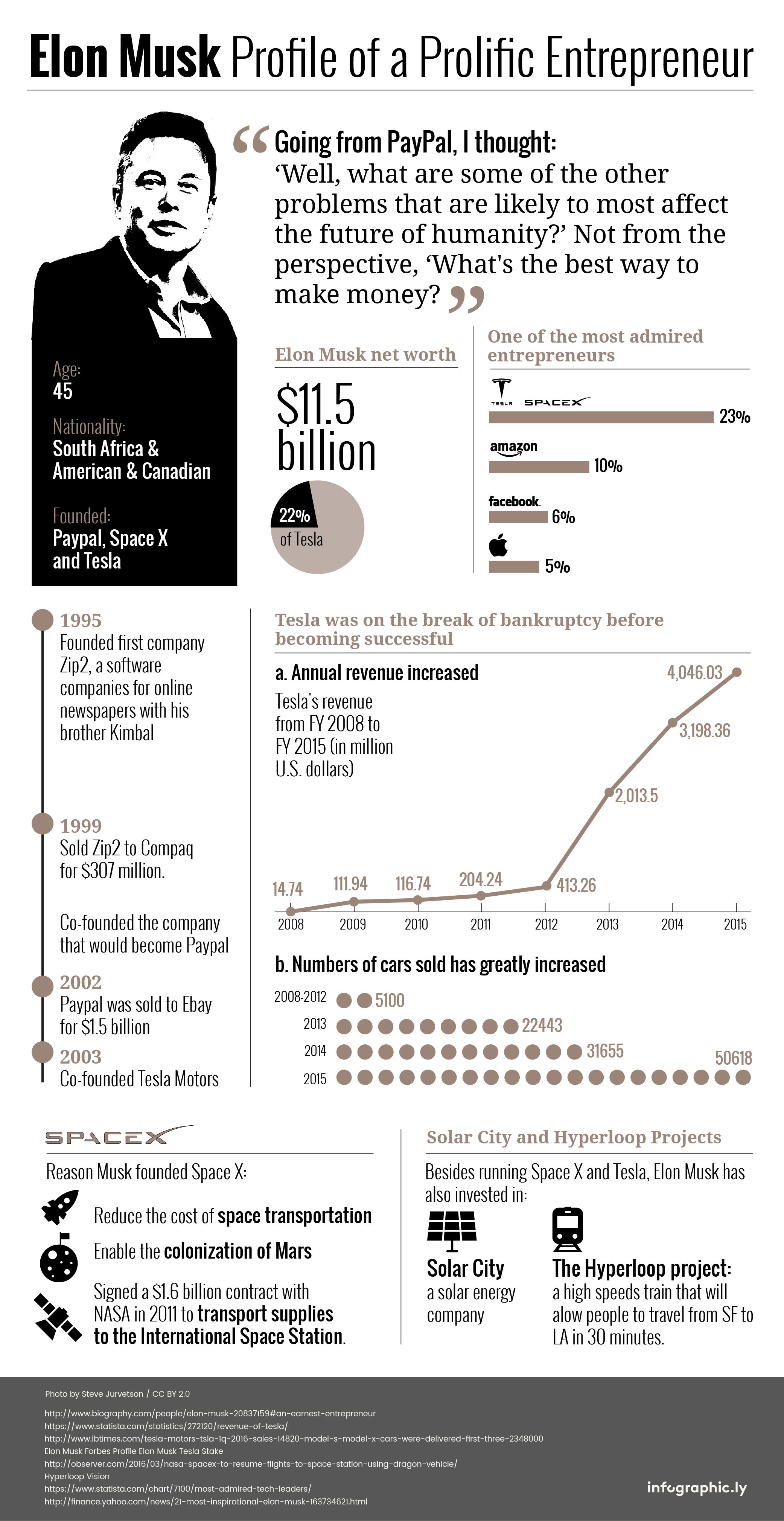