For all of the talk corporates in the Middle East make about their support of entrepreneurs in the region, there is also often criticism leveled against them on the premise that such endeavors are often all just, well, “talk,” and don’t really translate into real action or value for the people they propose to help. Many of these initiatives are also just flashes in the panthey are not conceptualized for the long term, and are essentially just one-off PR exercises for the organization running them. But while this may (arguably) be the status quo for the region, Zain Jordan has chosen to do things differently- and to give credit where it’s due, this telecom provider has been doing so since 2014, which was when it launched the Zain Innovation Campus (ZINC) at the King Hussein Business Park in Amman.

Since then, ZINC has supported more than 40 startups, signed more than 70 strategic partnerships, and hosted more than 670 activities, with a total of 36,963 people having visited the institution- while these figures are, by themselves, indicative of this initiative’s success so far, the very fact that Zain had these numbers measured and ready to share impressed upon me the company’s dedication to ensure that ZINC has a definitive impact on Jordan’s entrepreneurial ecosystem.

Claps are therefore in order for Zain Jordan CEO Ahmad Hanandeh, who has been spearheading the growth and development of ZINC into what it is today. “ZINC is an enabling platform where youth, entrepreneurs, innovators, mentors, investors, and corporates can come together as a community, with the joint goal of igniting a prosperous ecosystem,” Hanandeh says. “Today, following the launch of ZINC, entrepreneurs have a platform that they can use to convert their ideas into flourishing businesses. ZINC has many roles within the entrepreneurial ecosystem and cannot be constrained to one title. ZINC is not only an incubator, accelerator, investor, or coworking space. ZINC is a combination of all the entrepreneurial ecosystem’s core components.” 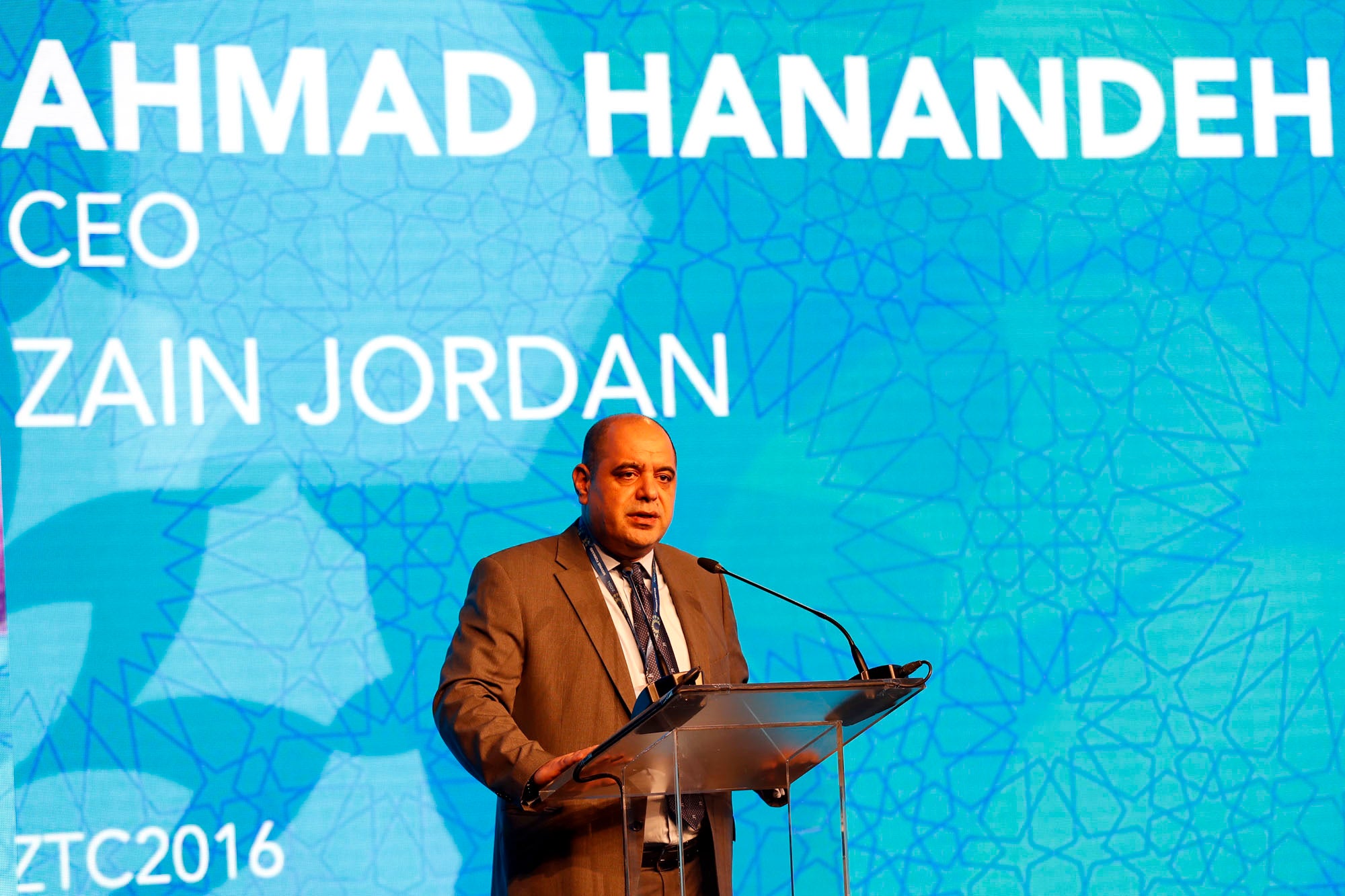 According to Hanandeh, ZINC is the realization of Zain Jordan’s strategy on corporate entrepreneurship responsibility (CER), a paradigm that was introduced to this region by Wamda Capital Chairman and CEO Fadi Ghandour. Hanandeh explains that CER is essentially an effort to get private companies more directly involved in supporting the entrepreneurial ecosystem.

“We believe that CER is a collaborative movement aimed at leading, mobilizing and organizing private sector efforts in building region-wide entrepreneurial ecosystems,” Hanandeh says. “We created a vision and a strategy for corporate entrepreneurship responsibility, and decided to focus on addressing the challenges that entrepreneurs and startups face throughout the lifecycle of a startup, from initiation to post-incubation period. The concept of creating an enabling platform came in 2014, and as a result, ZINC was established. Two years after ZINC’s launch and realizing the successful impact of our initial strategy, we decided to grow the CER strategy even further. This involved expansion into Jordan’s governorates, enhancing our startup support, focusing on further commercialization and extraction of value, and creating a ripple effect of CER adoption by the private sector in Jordan.”

And Zain Jordan certainly seems to want to lead by example- for instance, the Zain Al Mubadara initiative is an idea stage fund that enables the conversion of innovative entrepreneurial ideas into viable business models and ventures. The first edition of the program saw Zain adopting 12 business ideas, while the second saw it take in a cohort of 20. At the same time, besides its own mentorship and coaching programs, ZINC also helps entrepreneurs gain exposure on both regional and global levels by supporting their participation in events like RiseUp Summit, Mobile World Congress, and the International Mobile Gaming Awards.

Of course, ZINC has also played host to a number of entrepreneurial events and capacity building initiatives- these include Startup Week, MIT Enterprise Forum Innovate for Refugees, Adobe Inspire ME Creativity Conference, and more. Visitors to the ZINC campus have included high-profile names like their Majesties King Abdullah II and Queen Rania of Jordan, HRH Prince Charles, The Prince of Wales, and Amazon founder and CEO Jeff Bezos.

Looking at the above achievements, it seems pretty clear that ZINC has delivered on many of the goals it had set for itself, and while Hanandeh agrees with that sentiment, he is also pushing ahead for its continued progress. “I believe that ZINC’s impact is truly comprehensive,” Hanandeh says. “It has inspired so many entrepreneurs, provided learning and exposure, allowed startups to focus on scaling, reduced operating cost for many entities working from ZINC, and provided entrepreneurs with mentorship and coaching.

As well as the aforementioned, ZINC has also connected startups with entities from all over the world, helped create jobs, enriched the capacity of our youth, and provided sponsorship and support for so many initiatives and startups. For example, after working closely with Zain Jordan and associating their brand with Zain, over 75% of ZINC startups secured critical partnerships with other corporates in different sectors.”

As for the future of the enterprise, Hanandeh says that ZINC will be focused on enhancing the performance of all its core components, and expanding in governorates in both the North and South of Jordan. Plans are being made on activating ZINC within universities in 2017, which will see the enterprise hosting workshops with public and private sector partners in an attempt to encourage students to pursue entrepreneurship and innovation in their future careers. Its ZINC Academy division is also plotting new courses that will teach startups the tenets of scaling and legitimizing business models.

Given all that Zain Jordan has accomplished with ZINC so far, I asked Hanandeh for his advice for other established companies in the region who’d like to follow his organization’s lead with respect to supporting entrepreneurship and innovation in the region. “I would recommend that corporates start from within by implementing innovation practices the entire organization can adapt to the implementation of a CER strategy within the company’s existing strategy, vision, mission, and culture,” he replies.

“Your brand ambassadors and your strongest advocates are your employees. No company will be able to truly focus on supporting entrepreneurship without the buy-in and drive of its personnel. Then, corporates should spend time discussing their strategies and the methodologies in which they can support the ecosystem whether by establishing partnerships with entities that are already in the entrepreneurial field or by hosting activities that will allow them to engage with the ecosystem and create an impact. Examples of such activities include startup competitions, entrepreneurship workshops, hackathons and speaker series.”

A pitching competition at ZINC

Once these steps have been implemented, Hanandeh suggests that corporates take the time out to research routes through which they can actively support the ecosystem. “There are so many different ways in which the corporate can support startups,” Hanandeh says. “It could include launching a fund that invests in startups and takes equity in return, utilizing corporate resources and supporting startups through in-kind services, incubating them internally if they fit the sector they operate in and give them access to resources that will aid in enhancing their business models and scalability. Additionally, become startup clients themselves by adopting their solutions, products or services, and implementing them within their operations or offer them to their clients.”

At the end of the day though, Hanandeh believes that such initiatives should be spearheaded keeping in mind the original objective for such activities. “I believe that corporates should always maintain a strong connection with the greater purpose/ vision of CER,” he says. “It is improving the overall local economy through youth empowering initiatives that will inspire, and eventually lead to, job-creating opportunities through innovation and entrepreneurship.” It’s a lofty goal, of course- but then again, Zain Jordan seems to be well on its way to realizing this ambition with ZINC, and other corporates in the MENA region can definitely follow suit.

A look at 10 of ZINC’s most prominent startups