Tired of keeping up with your family plans? Yahoo has created an SMS-based digital assistant called Captain which aims to –wait for it- "streamline family logistics," all without an app. From shopping lists, to setting reminders, users can send an SMS message to Captain. To get started, users can text "hi" to it at 773-786 (though it seems to be available in the US, currently), so it can coordinate and remind you and your family members. 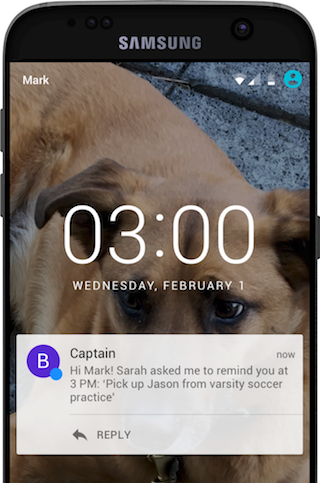 Its website gives an example of how users can simply text Captain to remind a family member of appointments, with a given time and date, as well as if you forget certain engagements, Captain can sort reminders by time or family members, add it to a calendar, and remind relevant people. There's quite a number of apps that can do these functions, and by features, Captain falls behind Amazon's Alexa and the Google Home assistant, but perhaps its edge is its ability to embed itself in an everyday feature: SMS text messages- so, trying to get family members onboard is not an issue.

The nifty software was launched amidst Yahoo’s issues- its two security breaches in 2013 and 2014 that rose during acquisition talks with Verizon resulted to a reduced price to acquire Yahoo for $350 million instead of its original offer of US$4.8 billion. Following the ongoing investigation, the US justice department has charged two Russian intelligence officers and two hackers over the data breach. As Verizon would acquire Yahoo’s core business, it leaves behind Yahoo’s 15% Alibaba assets and Yahoo Japan- these components would continue to exist under a holding company that would be called Altaba Inc. According to documents filed by Yahoo to the US Securities and Exchange Commission department, the acquisition could trigger for current CEO Marissa Mayer to receive a severance package of $23 million.

Related: A Smart Trash Can To Automate Your Grocery Lists