Stop saying 'Yes, but.' Start getting to 'Yes, and.'
Next Article

I walked slowly across the room, stretched out my arms and said "hot frying pan" to a man I didn’t know. That man acted as if I’d passed him an imaginary skillet, pretended to feel its heat and passed the cookware to someone else.

What the hell have I gotten myself into? I thought.

When Bob Kulhan invited me to participate in a workshop by Business Improv, a training company he founded, I didn't know what to think. Kulhan’s sessions aim to teach lay people improv acting techniques so they can apply them to all of life’s interactions. My main exposure to improvisational comedy was old snippets of Whose Line Is It Anyway? But hey, who’s not up for professional development, right? If I’m being honest, I also wondered whether the session would end as two hours of bad acting and awkward chuckles.

The class that day was mostly made up of a group of securities and insurance professionals -- business-casual people who probably know more about annuities than imaginary frying pans. It’s a profession consumed with risk -- just not the type that involves acting silly in front of colleagues from across the country. Could a session like this really change the way you work or brainstorm?

Related: I Recently Made My Stand Up Comedy Debut. It Was Terrifying, But So Rewarding.

Our first exercise was a simple meet-and-greet: Kulhan asked us to walk around the room, introduce ourselves to everyone and shake their hand. Then things got wacky. Kulhan told each of us to consider one person we just met as our "shield" and another our "enemy." Each of us needed to keep our shields directly next to us -- and between us and our enemies.

There was a brief moment when everyone moved slowly and awkwardly smiled. Then, the realization that Kulhan was serious swept across the room. Imagine a soda bottle that's been shaken, then slowly opened -- this room of adults shed the awkwardness of the situation and erupted in chaos, running around each other and laughing. It was like being back on the playground. 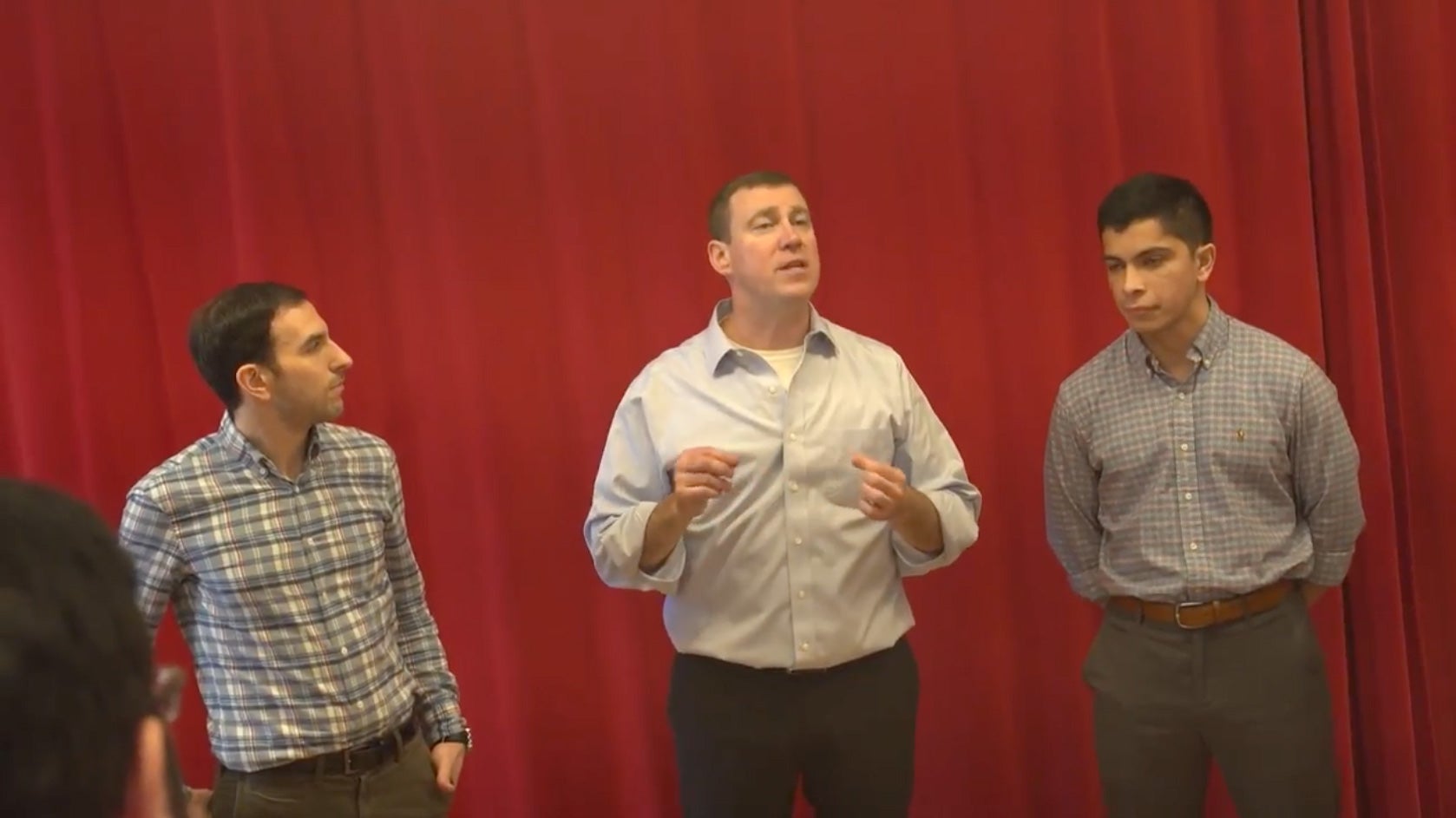 Bob Kulhan speaks to the group about an exercise in which we would express enthusiasm for every idea.
Image credit: Business Improv

These two exercises, I realized later, were designed to loosen everyone up -- to create an environment where feeling silly was OK. It was necessary -- and it worked.

Which leads to me walking across a room passing around an imaginary frying pan. It was one of many imaginary objects Kulhan "handed" us, including an invisible red ball and even multiple imaginary colored balls.

And I somehow screwed this up.

I must have confused one color for another, because I ended up creating a copy of another imaginary ball already being passed around, so now there were two "green balls."

Here, Kulhan stopped the exercise. He then shared what this practice was all about: listening intently to the person in front of you -- something we all need to do in the workplace. Something I was surprised to learn I could do better, too.

It wouldn’t be my last revelation. In another exercise, Kulhan asked us to pair off and have conversations about a topic of our choosing, but limit our responses to start with either “Yes, and…” or “Yes, but...”.

I'd like to think I'm an agreeable person, but I know that's not the case all the time. I can be passionate in my arguments, and it's striking how the simple words "and" and "but," both of which we all use constantly, can completely change the tone of a conversation.

Related: What the Stars of Impractical Jokers Can Teach You About Teamwork and Risk

I found this a vital lesson -- especially in the work world. Even when we disagree with our co-workers or our boss, we should always try to respond with a "Yes, and" -- a common improvisation prompt. (The title of Kulhan's new book, released last January, is Getting to "Yes And".) This acknowledges what the person has said without disregarding it. It sparks conversation instead of shutting it down. 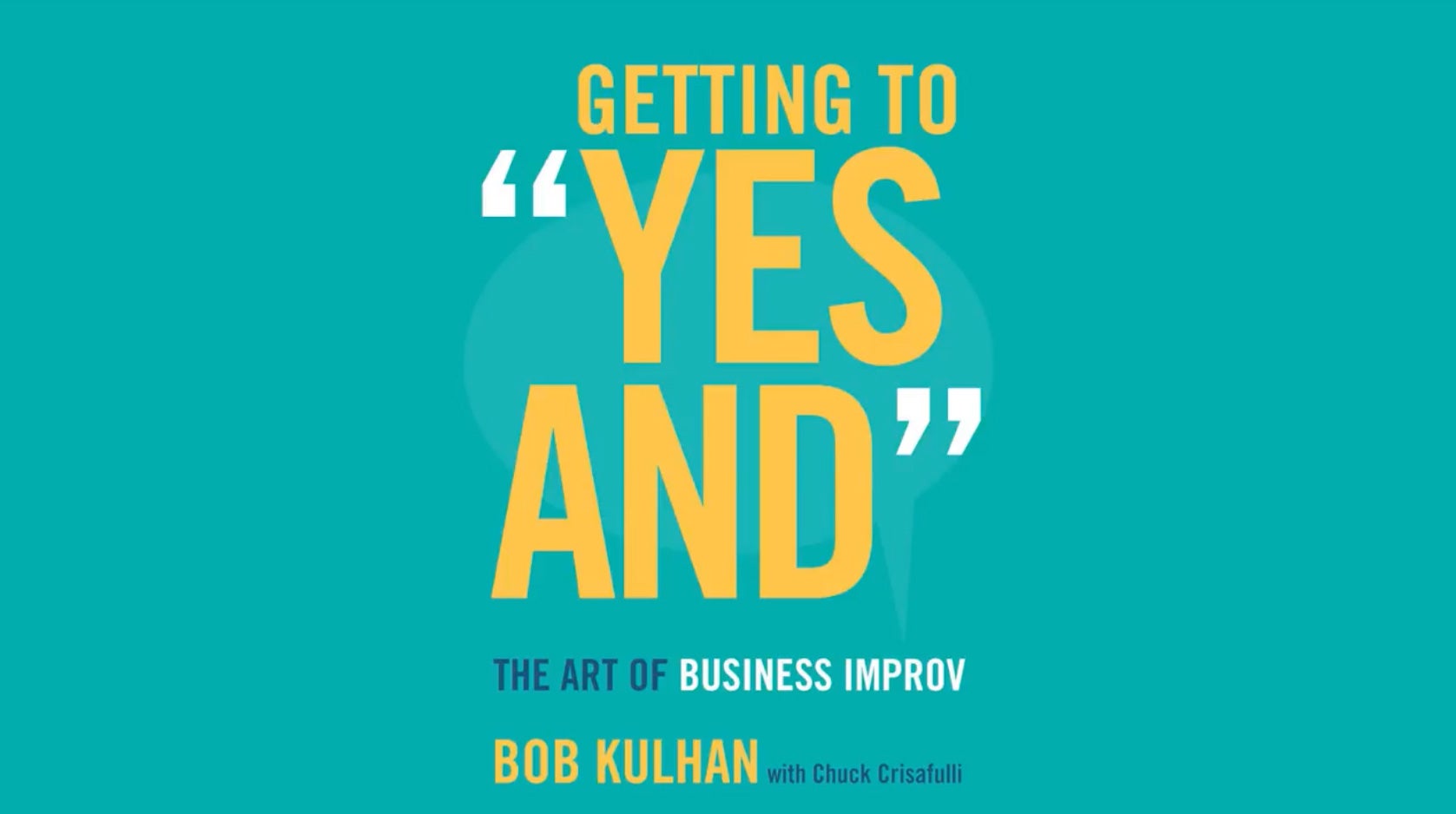 We saw this play out later, after dividing into groups and dreaming up after-school programs for a fictional school district. Kulhan assigned each of us a role, such as superintendent or science teacher. When we all pushed our agendas for after-school activities, ideas flowed.

But then, Kulhan asked us to pick another school official we’d champion and one we'd dismiss. You can probably guess what happened: We spent most of the time arguing. Creativity and negativity just don’t work well together.

The “Yes, and” concept even changed the way we listened. In asking us to create an imaginary marketing campaign, Kulhan instructed us to be enthusiastic about every idea. That meant cheering, applauding and even jumping up and down. It felt amazingly silly, but there was a hidden lesson here as well: Contributions should be celebrated.

This is something I need to remind myself of constantly. I find myself looking at my phone and nodding during meetings, and I know some of my co-workers do the same. What would happen if I dedicated even a fraction of the enthusiasm expressed during the aforementioned marketing exercise in my meetings?

We can choose to maintain the status quo and shoot down ideas, or we can listen intently and acknowledge the good aspects of even the most out-there proposals. We can choose to be positive and participate.

"If a meeting is supposed to have 100 percent participation and you are not participating, what value do you bring to that meeting?" Kulhan asked. He then shared this apt metaphor: "Ideas are gold, and in brainstorming or collaboration, I’d rather give myself time to take a large pan and pull up as much as I can from the river, thereby increasing the probability of finding gold within the sorting process."

At the end of the session, Kulhan asked everyone to write down their big takeaways on a large notepad. Many of these -- from “Be present” to “Be encouraging” -- weren’t too different from my own: “Be conscious about how to frame your responses to ideas."

It’s a simple practice -- and the type we write about every day on Entrepreneur. But writing about these strategies is different from watching strangers act them out in front of you.

All in all, the session drove home that how we react to one another is a choice. We can choose to zone out or shoot down someone’s ideas just as we can choose to be positive and listen intently. These reactions are in our control. As Kulhan told us at the start of the session: "People plan more for the weather than they do their own energy and attitude."

This isn't just wishy-washy BS. Since the improv session, when one of my colleagues has introduced an idea I probably would have disregarded in the past, I've been more amenable to how it could work. I've also become more conscious of how I contribute to meetings, instead of just absorbing them. It's not easy, but it's worth it.

That's a lesson certainly worth a couple of hours and a little embarrassment.
More from Entrepreneur