A first-of-its-kind 'businessman on a shoe' collaboration aims to inspire the next crop of entrepreneurs.

November 14, 2017
Opinions expressed by Entrepreneur contributors are their own.

At some point in your life, you probably wore a pair of the perennial K-Swiss Classic tennis shoes. It all started with a dream in 1966 when two Swiss brothers moved to California to start the footwear company.

When Barney Waters became K-Swiss’s new leader in 2015, he had an idea to inspire the next generation of hustlers and go-getters.

Adopting the “culture of a 50-year-old startup,” Waters recognized that if you look at what’s relevant online, you can’t avoid the social media superstar, mega-entrepreneur, and CEO of VaynerMedia: Gary Vaynerchuk. He’s the ultimate representation of what many young people aspire to be.

Vaynerchuk gave The Oracles the exclusive inside scoop. And here are six business lessons you can learn from the collaboration.

1. Push against an open door.

Waters says, “If you can’t be first, be different.” K-Swiss recognized that Nike owns the athletics space, which started with the juggernaut (Michael) Jordan brand. And Adidas owns the celebrity space with the Yeezy (Kanye West collaboration) brand. But no shoe brand was occupying the entrepreneurship space.

Their research found that 60 percent of people want to be the CEO of their own company. Ten years ago, it was to become a celebrity or an athlete—no one wanted to become an entrepreneur. In a shrewd business move, they’re leveraging that culture with Vaynerchuk, one of the leading faces of modern entrepreneurship.

Watch any YouTube video of Vaynerchuk in his office, and you’ll see he’s a fan of nostalgia. Yet he “lives and breathes” what’s culturally relevant. “Sneaker culture is super fascinating and the pillar of our culture,” he says.

“The Jordan and Yeezy brands are legendary, but it would be interesting to see if I can create a bit of legacy by rocking a sneaker that rides the wave of entrepreneurship culture,” Vaynerchuk muses. 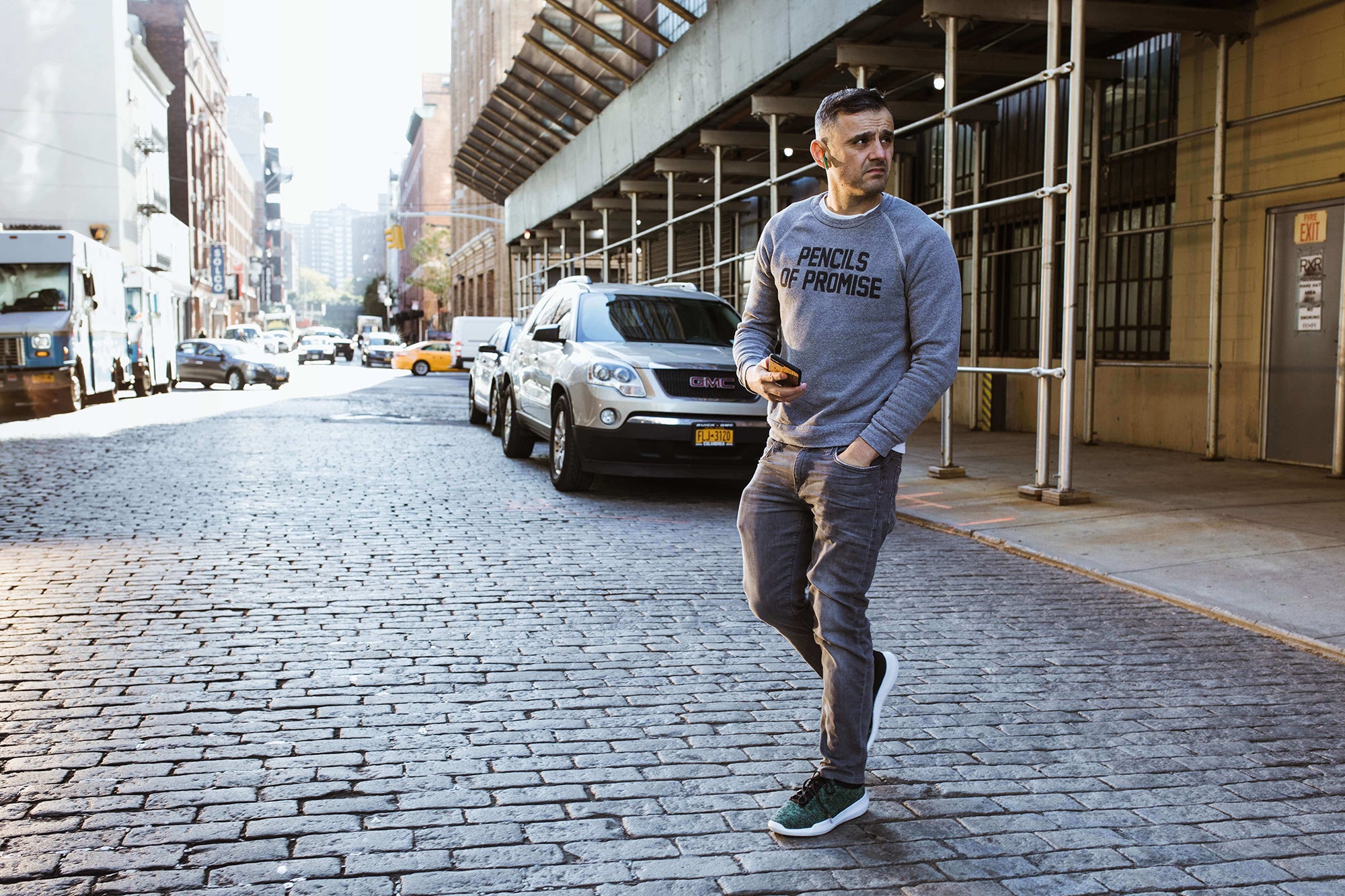 In any business decision, authenticity is at the forefront of Vaynerchuk’s mind. “The biggest thing for me is authenticity. Do I feel authentic about it? Do I feel comfortable about it? It has to create impact and bring value to my audience.

“I look for new, first, and different stuff,” he continues. “After turning down a lot of TV, ‘Planet the Apps’ appealed because it was Apple's first original program. I’m excited to partner with K-Swiss because it’s a groundbreaking case study. No entrepreneur has ever partnered with a shoe brand.”

K-Swiss approached Vaynerchuk, who famously schedules his meetings by the minute. So when deciding who to grant his time to, he looks for win-win situations.

“I've negotiated my whole life. I was buying hundreds of thousands of dollars worth of wine when I was 22 years old. Making deals feels comfortable. I just try to leave a little bit on the table for the other side. Partnerships fail because people get too greedy.”

To avoid greed, Vaynerchuk recommends “The 51:49 Rule.” “If I get 49 percent of the deal, I know what to do with it. How do I over-deliver so my partner talks good about me behind my back?”

Vaynerchuk is using this strategy in his current negotiations on a dream collaboration that’s nearly closed. “Not to give away too much, but it would be ‘above the beltline.’ It’s a brand I wore quite a bit in high school.”

5. Launch on top of a community.

Although only 2,800 GaryVee sneakers are available, he believes that limited supply is not the Holy Grail for launch hype. “I think the reason the sneakers will sell is because of everything I do the other 360 days a year.

“I've built an actual community over the last 10 years. The humility and the work ethic 360 days a year sets up the other five days a year when I’ve got something to throw a right hook around. That’s the strategy. If I don't have a real community, I haven't brought value. I'll have to drum up the sales. Then you're trading on sales, not a brand.”

6. Know how many you need to sell.

When asked how many sneakers he needed to sell to achieve his dream goal of buying the New York Jets, Vaynerchuk laughed and said: “All of them. All the shoes on Earth.”