I’ve been an unabashed fan of A.R. Rahman for a long while now, and when I say, “a long while,” I mean that quite literally- I first came across this Indian artist’s creations back in 1992, when he composed the soundtrack for a Tamil movie called Roja. That album -which, by the way, is now listed as one of TIME’s “10 best soundtracks” of all time- signaled the start of Rahman’s journey in the music industry, which, after more than 25 years, now sees him as an international artist par excellence with a plethora of awards -the list includes two Academy Awards, two Grammy Awards, a Golden Globe, and a BAFTA Award- in addition to a fan following spread across the globe.

No surprises then as to why I felt tongue-tied, and quite frankly, star-struck, when I got to meet with the man dubbed as the “Mozart of Madras” in January, prior to his headline appearance at The Journey, a concert that was organized by Brothers Incorporated and staged at Bollywood Parks, Dubai in the same month. I didn’t get to spend a lot of time with Rahman, but the few minutes that I got to chat with him did offer, I believe, glances into the psyche that powers this genius. Success, to this artist extraordinaire, is something that doesn’t come easily- but Rahman feels that the road to it starts with one having a steadfast belief in oneself. “You have to [hold] a mirror to yourself,” Rahman says. “Look at yourself, and where you stand with all these people around- are you standing out? What will make you stick out is your personality- and hard work. Instant success never comes. You don’t get success in one day, two days- it might take two years, three years, 20 years... But come out with a strong personality, and something to contribute to humanity- and you’ll be recognized.” A.R.Rahman at a concert in Chennai,India. Image credit: A.R.Rahman.

Such a sentiment would explain what has fueled Rahman’s meteoric rise as an artist, along with his passionate support for a number of social causes. He started out as a composer for movies made in the Southern part of India (hits include Bombay, Minsara Kanavu, and Kandukondain Kandukondain), which eventually led him to enter the country’s larger Hindi film industry, Bollywood, as well, and a string of hits later (landmark albums include Rangeela, Taal, Dil Se, and Lagaan), he soon had a fan following in all corners of the country. His success (and impact) in India got his work to be noticed overseas as well- the legendary English composer Andrew Lloyd Webber (of Cats and The Phantom of the Opera fame) commissioned him for a theatrical production, Bombay Dreams, in 2002, and soon, Rahman found himself working on a number of projects in the West as well. His music for the Danny Boyle-directed movie Slumdog Millionaire in 2008 saw him win a slew of international awards, which firmly established him as a musical icon with a global presence.

Rahman’s music has transcended boundaries, and links people together in ways that are, quite simply, unfathomable- for a frame of reference, know that Rahman is the common denominator in the rendition of an 18th century Carnatic classic “Alai Payuthey” (Alai Payuthey) at, say, a pious wedding in Chennai, India, and that sound of Nicole Scherzinger blaring out “Jai Ho” (Slumdog Millionaire) at a weekend party in New York City. For what it’s worth, his standing in the global landscape is something that Rahman is very aware of (and grateful for), and he does acknowledge the responsibility it brings. “It seems like there’s reason behind all of this stuff,” Rahman reflects. “When you see all this turmoil in the world, you feel like you can be a voice, like a neutral voice, through art.” And this statement serves as an indication of how Rahman approaches being a humanitarian as well: he has lent his name to and partnered with a number of social initiatives, one of which is The Sunshine Orchestra, a program that takes in talented children from underprivileged backgrounds in India, and then trains them in the art of music.

This is just one example though, and regardless of whether it is a philanthropic activity or not, Rahman claims to be driven by a desire to effect change (of the good kind) in the world around him. “What you do is what you get,” he declares. “Even if it’s in your mind, if you intend to do something good, then there’s a reward for that. And we should never underestimate that. Just smile at somebody- there will be a reward for it… So, nothing goes to waste. For one kind deed, there will be a reward for that. For one kind thought about the whole of humanity, there’ll be a reward for that.” This is an ethos that has obviously served Rahman well, and the rest of us would be wise to follow in his footsteps- regardless of what we set out to do with our lives. “There should be a purpose,” he declares. “Money is not a purpose. Fame is not a purpose. But humanity is a purpose.” 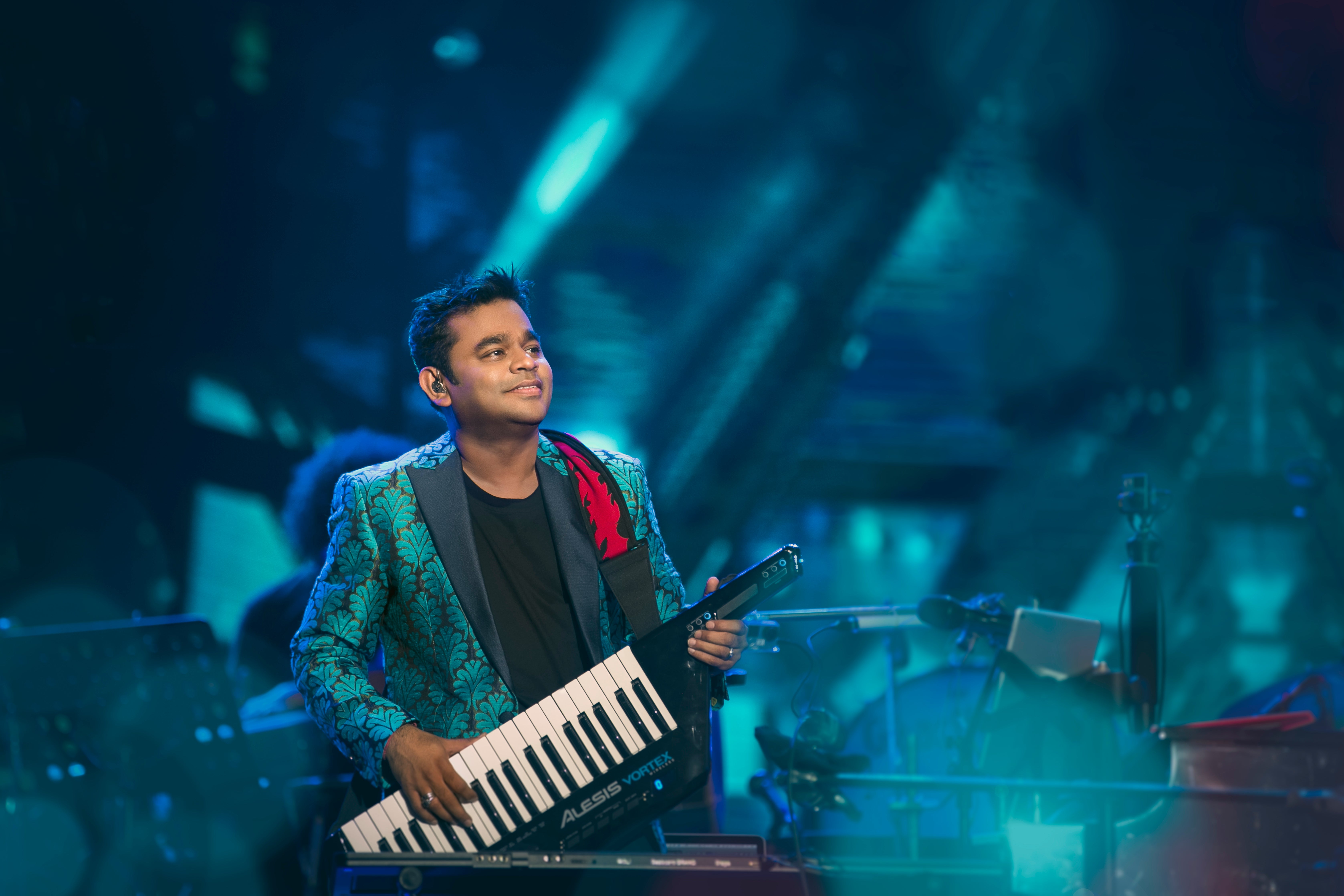 A.R.Rahman at a concert in Chennai,India. Image credit: A.R.Rahman.

While Rahman’s ideas should be inspiring for all you creatives out there, I’d suggest the not-so-arty among you (wannabe entrepreneurs with dollars in your eyes, I’m looking at you) to also take his words to heart. As for those of you dreaming of replicating the success that Rahman has achieved, Rahman says that your road to it begins with you knowing yourself, and understanding what makes you, well, unique. Of course, this is easier said than done, and yes, you will need a while to come to this realization. “To get that special instinct that you’ve got something which nobody else has, it takes time,” Rahman says. “It’s a big shift. You need to first convince yourself- you need to deliver something, and show yourself [that you can do it]. When you get that internal coin drop, then it’s easy. You then have to show what you have to like-minded people, and then slowly, everything will come together.” This may sound simplistic, sure, but I, for one, find it hard not to be taken in by Rahman’s childlike, but intense, belief in this premise. “When you have put in so much of your energy into something, then that energy has value,” he says. “You have to have faith, and you have to keep at it, consistently… You may lose hope [at times]- but you’ll find a way.”