By Anish Passi March 12, 2018
Opinions expressed by Entrepreneur contributors are their own.
You're reading Entrepreneur India, an international franchise of Entrepreneur Media.

Nation Building is a multidimensional concept, and it involves the active participation of its citizens in various walks of life. A strong and powerful nation is built on dedication and hard work of its citizen and some amount of smart planning on the part of the Government. There are various facets of Nation building among which the most important ones at this moment in time seems to be the tapping the potential of its human resource, reducing the social and economic disparity that exists in the society and creating an enabling environment, wherein individuals can live freely and attain their best in life.

Tapping the Potential of Millennials

India is a young country with half of its population below the age of 25. Every year, around 13 million youngsters join the Indian workforce, but the economic development in the country has not been able to generate enough opportunities to employ the growing workforce effectively.

•   Skilling of the workforce

•   Providing an enabling environment for Entrepreneurship

Minimizing Inequality in the Society

Economic contrast is one of the fundamental barriers to realize the dream of a strong India. Inequality in the society is one of the major roadblocks to building a better nation. According to the latest world inequality report 2018, the top 1% earners corner a massive 22% of the national wealth, while the top 10% corners 56% of the national wealth.

From the graph mentioned below, we can track the changes in economic inequality from 1950 to 2014. 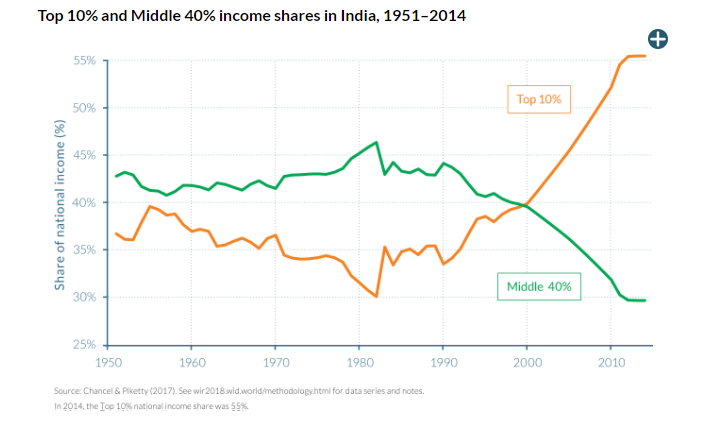 Such economic inequality in a country is a sure shot recipe for disaster. There is a growing body of evidence globally that demonstrate that increasing variation is associated with various social ills such as poor health outcome of citizens, poor educational results, rising level of crime, to name but a few.

To overcome economic inequality in Indian society, the government needs to increase its social spending. Over the years it has been found that increasing public expenditure on education, health and social protection has helped to tame the rising inequality for poor and rich country alike.

In India, the Tax to GDP ratio is barely 16.7% which is below the global average and discourages social spending. The government needs to plug the leakages in the Indian tax system to improve Tax to GDP ratio, which will provide the required economic muscle to the state to increase social good.

Education is the most significant leveller in an unequal society like India. Provision of quality education opens up doors of opportunity and helps break free the social and economic barriers which prevent an individual from realizing his inherent potential.

Over the years, the government has been making consistent efforts to provide free quality education, but the lack of quality infrastructure and teachers has remained a bottleneck. The Annual State of Education Report 2017 reveals that the Indian youth in the age group of 14 to 18 are ill-equipped to read, write and do basic arithmetic. Thus, the level of education needs urgent attention.

The digitization of education opens new vistas of opportunity for the government and private sector to leverage its potential to make quality education accessible to all section of society.

The Indian start-up landscape is abuzz with innovative solutions to provide quality education from the best educators to improve the level of educational outcome.

The Indian Government is also leveraging digital technology in a huge way to overcome the issues of quality, uniformity and accessibility in the field of education. Under the Rashtriya Madhyamik Shiksha Abhiyan Scheme, 88 thousand government and government-aided school have been approved to be transformed into smart schools. The government has also started SWAYAM scheme to provide courses taught in the classroom from class 9 to post-graduation level to be accessed by anyone, anywhere at any time.

These changes will undeniably enhance the educational outcome of the country and will create opportunities for fast economic growth.

The experience from developed economies has shown that there is a definite correlation between job creation and entrepreneurship. It has other advantages as well; it allows the available resources to be allocated efficiently, stimulates competition, supports innovation and promotes the growth of the economy.

India has a myriad of social problems that inhibit its progress. There are issues of poverty, women empowerment, financial inclusion etc. The social entrepreneurs must take up the pressing issues in Indian society and use innovative entrepreneurial techniques to solve these issues.

Some success examples that can be mentioned are

Bunker Roy; he started barefoot college in rural India to train illiterate man and women and improve their prospect.

Mohammad Yunus from Bangladesh; he started Grameen Bank to disburse microloans to poor rural people in Bangladesh which provided financial power to the poor households to create a sustainable source of income for themselves.

What Does the Future Hold for India?

In spite of all the challenges that India faces today, the Indian economy has emerged as the fastest-growing major economy in the world.

On Purchasing Power Parity (PPP) term, Price Waterhouse Coopers predicts India will take over the USA by 2050 to become the second largest economy in the world.

This massive growth in Indian economy will provide immense economic power in the hands of the Government, which can be appropriately used for the public welfare and to solve the problems of inequality, poverty, education, health etc., making India one of the greatest nations in the world.