Post-hurricane, this Pita Pit franchisee in San Juan dealt with lack of food, gas, power and communication. Here's how she used a new mindset to move forward.

In the Women Entrepreneur series My Worst Moment, female founders provide a firsthand account of the most difficult, gut-wrenching, almost-made-them-give-up experience they’ve had while building their business -- and how they recovered.

When Hurricane Maria hit Puerto Rico on September 20, 2018, it left almost insurmountable tragedy in its wake. Although the death toll is widely disputed, one Harvard study estimates a potential 4,645 excess deaths, and the storm likely caused between $40 billion and $85 billion in damage, according to catastrophe modeling firm AIR Worldwide. Businesses -- and plans for businesses -- were also heavily impacted. Valeria Quinones had invested $300,000 to open a Pita Pit franchise, and although her construction site wasn’t destroyed, she faced hunger, power outages and monetary losses. Here, she tells us how she used a new mindset to take her next steps and move forward.

What follows is a first-person account of this person's experience. This interview has been edited for length and clarity.

“The afternoon after Hurricane Maria, I got in my car and drove. I was franchising a Pita Pit location in San Juan, Puerto Rico, and I had no idea whether my construction site had been hit by the hurricane. I pulled up and saw nothing had happened to it, which was great. But I looked around it, and everything else was destroyed.

At that moment, I thought I had lost everything -- my entire $300,000 investment. Listening to the radio, the little information we had was that everything was completely destroyed, including the airport, and that we weren’t going to have power for over a year. It’s the worst news you could ever hear. My first thought was that I couldn’t move forward with my investment, because Puerto Rico was destroyed. There were so many other things to be fixed that took priority -- airports, ports and more. 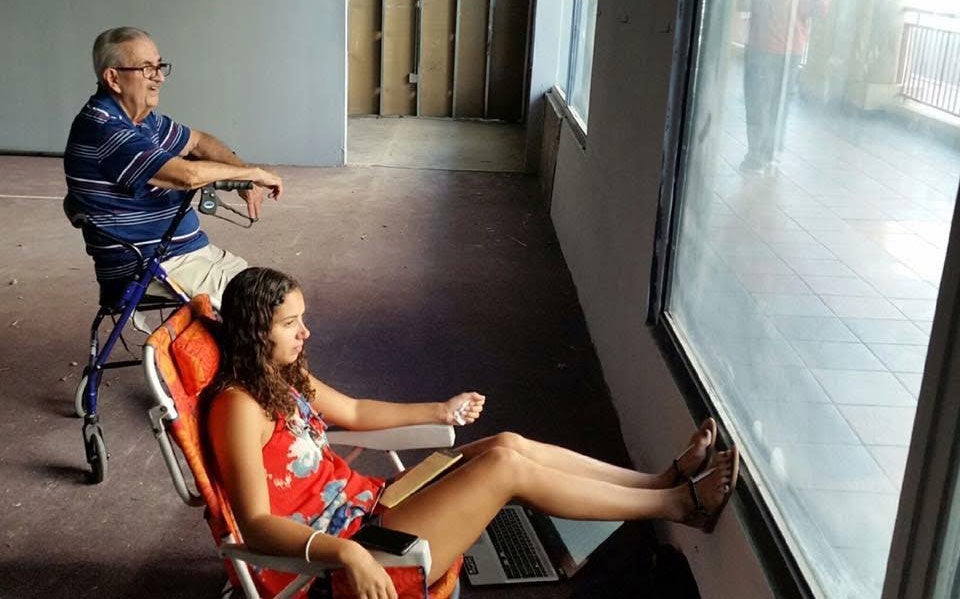 My family and I were all staying together -- my grandmother, sister, brother-in-law and nephews, ages one and four. The day before the hurricane, everyone went to the supermarket like crazy, buying everything we could find. But after a couple of days, we started running out of food, because there were a lot of us, and no shipments were coming into the supermarkets anytime soon. We were eating about once a day, twice if we were lucky. We went to Popeye’s once and spent three hours in line, and they didn’t have fries or drinks -- just one type of chicken. There also wasn’t any gas for cars, and everyone in Puerto Rico had a 6 p.m. curfew.

As the days progressed, I had a lot of time to think. There was nothing else to do -- no phone, television or internet. I reached rock bottom, because I kept acknowledging the reality and severity of the situation. After about two and a half weeks, I thought, I’m going to drive myself crazy if I keep thinking this way, that everything’s destroyed, and we’re stuck. I knew I had to start thinking, there has to be a way to move forward. That’s when I changed my mindset. I had been staying in that negative place because it was comfortable, but I knew I couldn’t survive with that type of thinking long-term. I thought, yes, I have no power, no water and little food in the house, but my store wasn’t destroyed, and everything in it is okay.

When you think of an investment, you always think of the big stuff -- if something was destroyed or flooded. But what really hurt me was the small stuff. I was mid-construction, so the walls, painting and wiring weren’t finished, and the kitchen equipment hadn’t been installed yet. How do you finish construction without power or electricity? How do you polish and treat floors without plugging in the machinery? Where can you buy light bulbs if there aren’t any in stock? I technically hadn’t lost anything that I already had, but post-hurricane, I had to put in $45,000 more via an owner’s equity injection due to delays, shortages, construction, rent, equipment and more.

As communication began again, little by little, I started to reach out to my contractors to see how they were doing. I knew I had to change the reality of my situation. Everyone was struggling, but there came a time after about two and a half weeks when we all knew we needed to move forward. They wanted to get back to work so they could pay for food. We got together and tried to complete the puzzle day by day.

Hurricane Maria may have passed, but we’re still seeing the effects of it on the market, economy and infrastructure. Before the hurricane, I had projected my fixed expenses, but that was based on an economy and market that were doing much better. Before Maria, we had about 17,000 people -- a combination of locals and tourists -- per day in Old San Juan. Currently, we have between 6,000 and 7,000.

We ended up finishing the store, and it opened on April 6th with great momentum despite a few power outages. I’m shooting to break even right now, open seven days a week and working 16 hours per day to promote customer interest and become established in the market. I’m also launching guerrilla marketing campaigns by way of continuous trial testing and discounts. I feel certain that San Juan will rebound, and it’s important to stay tough so that we can be in that place when the rebound happens. Yes, it’s been a struggle, but it’s been an upward struggle in a positive way. We’re still slowly but surely moving forward.”