AR/VR and the Future of Immersive Problem-Solving

Immersive technologies have moved beyond the trough of disillusionment towards slope of enlightenment.

By Sandeep Soni August 25, 2018
Opinions expressed by Entrepreneur contributors are their own.
You're reading Entrepreneur India, an international franchise of Entrepreneur Media.

From an interactive theatre experience devised by Morton Heilig in 1957 and first head-mounted display developed by Ivan Sutherland in 1968, virtual reality (VR) and augmented reality (AR) respectively have transitioned into crazy cinematography in science fiction movies. But that is too futuristic for real life, at least five-10 years ahead of time. And to fill that gap fast, start-ups are turning illusion more real than reality.

We have been seeing this coming, at least since the 90s, however, it got more certain in recent times as the relationship between man and machine entered the fourth industrial revolution.

The transition from physical to the digital world has got more apparent as global research firm Gartner says that immersive technologies have moved beyond the trough of disillusionment towards slope of enlightenment. “The immersive way of visualizing things to create solutions for solving problems is what it is going to be. We are standing at the point of inflection from where the immersive way of things is going to make its presence felt even more,” says Gautam Tewari, Founder, SmartVizX. The start-up creates virtual environments for the architecture, engineering and construction industry using VR.

While behind that transition happening, there are tremendous engineering inputs that are required for building an application but for consumers, the transition from physical to digital is pretty seamless. However, this also depends on the industry one deals in. “Let’s say for an architect, AR/VR is a very easily adaptable experience but in B2C model, for instance in early-stage education where consumers are kids and buyers are parents, the awareness about this technology is very low,” says Tushar A Amin, Co-founder, Smartivity Labs. The start-up offers do-it-yourself science, art and craft kits for children using AR/VR and artificial intelligence to enhance creative, practical and analytical intelligence. It sold around a lac unit of its first product in four months after its launch in December 2014. 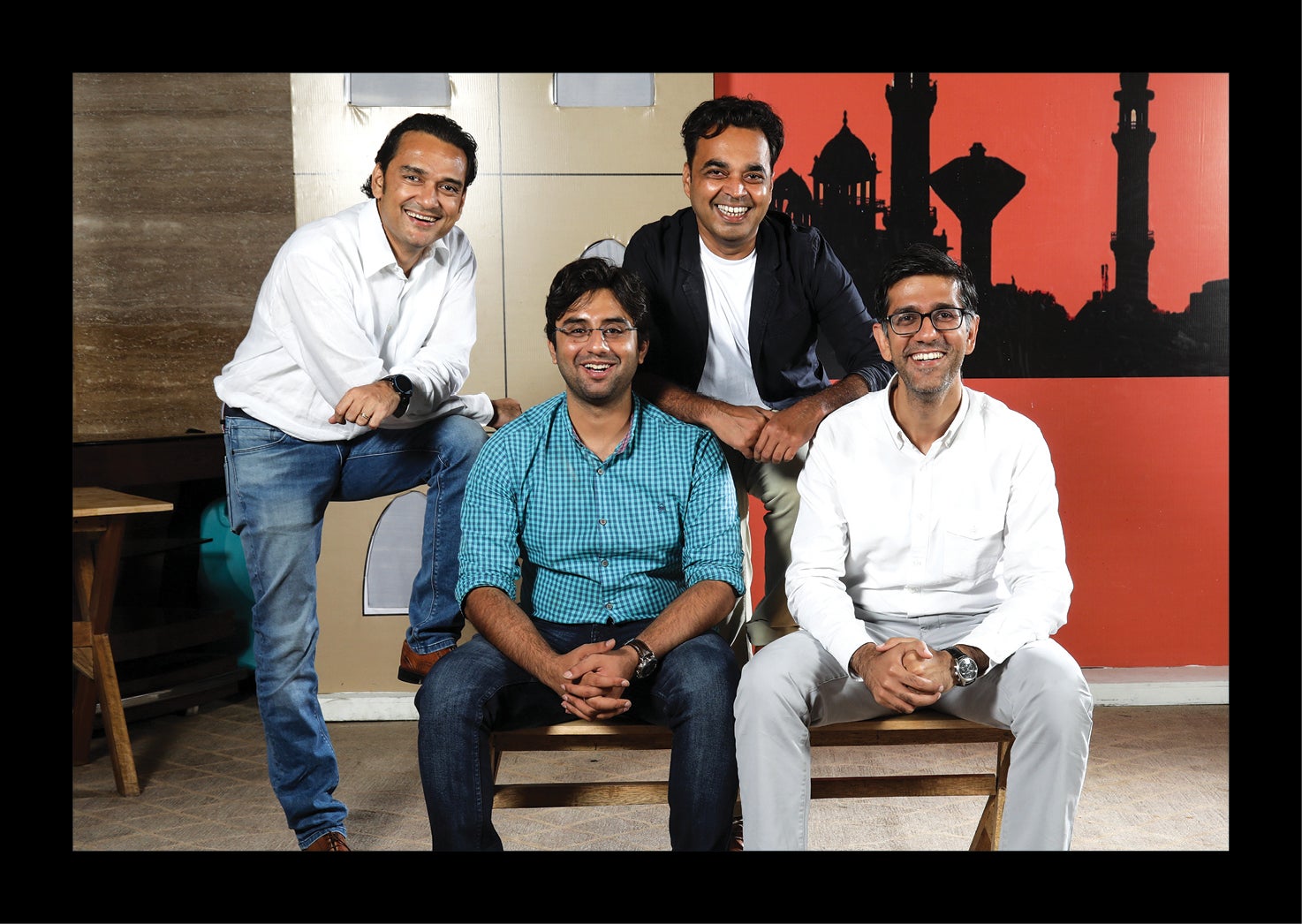 While parents bought it but had little idea about how it will help their children since the awareness around technology didn’t exist. “This continued until something like Pokemon game came in which became popular and people got to know what AR/VR is,” he adds. However, it’s the challenge with any new technology that sees mass adoption after it has a significant number of early adopters and evangelists.

While AR/VR has evolved over last many decades from its earliest versions, the adoption as we know will take time. It is still very early days for consumers particularly to understand its significance. Currently, there are no ready takers as it is largely a mindset issue.

“From the end-user perspective, we see around 10 percent users interacting with our AR features. We realized that once they see someone using Magicpin, then it becomes very intuitive for them,” says Nipun Bhatia, Chief Technology Officer, Magicpin – hyperlocal experiences discovery app. It allows users to explore information about various things by simply pointing a smartphone camera to it. “Scanning an item on a menu will show how the dish looks like and what its reviews are,” he adds.

While the adoption stage is nascent, the intent is certainly there. Moreover, the expectations of users are derived from what they see in Hollywood movies. Hence, every user has to be convinced about the value AR/VR brings. “I blame sci-fi movies that have raised the expectations. For instance, if I scan an image and it comes to life, it is a huge step forward in technology but the user expects it to be as real as reality,” asserts Amin.

Also, most of the use cases that have seen adoption have been creating engaging content. For instance, Facebook’s AR stickers, Snapchat’s AR selfie games called Snappables, Instagram’s AR camera effects are gimmicky and engaging. However, it doesn’t transform into anything of value and still remains the next form of expression.

“Technology comes in windows. You might get depth and see some characters emerging which is a good form of expression. But it will take time and I am not sure when it will come on a mass scale in the consumer world,” says Kshitij Marwah, Founder and Chief Executive Officer, Tesseract. The start-up has developed holographic capture cameras for mixed reality (combining AR/VR) content creation and augmented reality headsets for viewing that content in an immersive manner. Marwah was part of MIT Technology Review - Innovators Under 35 last year. 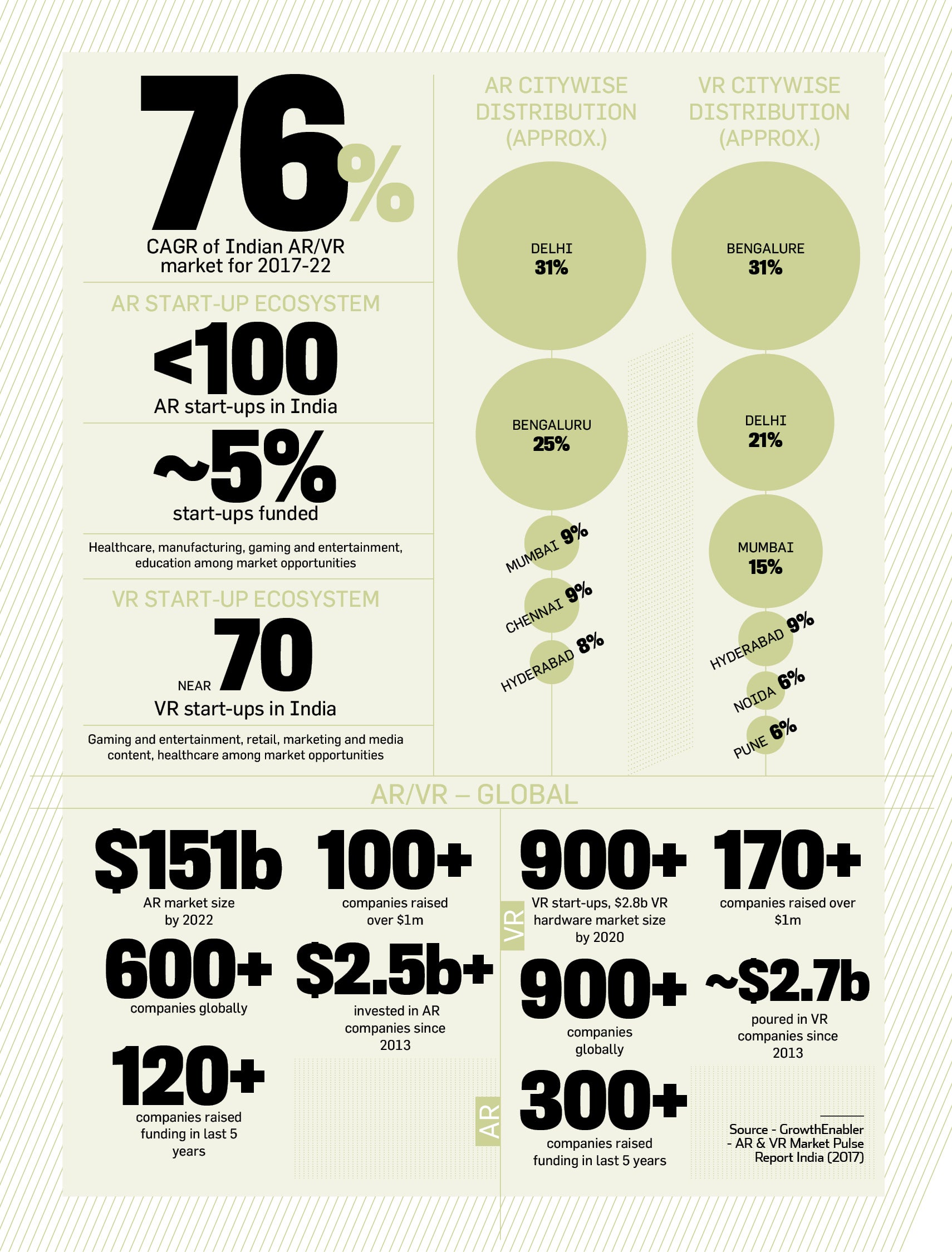 At the market level, certainly markets like the US are much ahead in terms of adoption. Unfortunately, usually, it takes a few large technology companies like Google or Microsoft to launch a technology in India for other to believe in it and follow that.

“On the consumer side, we are serving users who most likely have android phones under Rs 15,000. When you compare it with average smartphone type in the US which is on the higher end, it is starkly different. This is what the US firms are building towards. Hence, their market has a higher adoption rate with a better experience,” adds Bhatia.

Broadly, from the software development perspective, the AR/VR ecosystem presents a unique opportunity. The talent that understands technology is as good as the talent available in the US or Israel. “Who will win the AR/VR race depends on the hardware and how the content really adapts itself to multiple,” concludes Tewari.