Cameron Fous led a glamorous life until he traded it all to find happiness and help others do the same.

September 28, 2018
Opinions expressed by Entrepreneur contributors are their own.

Cameron Fous had it all. The day trader’s life was evocative of the Wolf of Wall Street, with a million-dollar bay-front condo in San Diego, three luxury cars, and yacht parties on weekends. He was a social media celebrity, the poster boy for a lifestyle many would-be traders tried to emulate.

“I always dreamed of the luxury life you see in movies—the cars, boats, condos, girls. With day trading, I got it all. I even threw a ‘Wolf of San Diego’ yacht party, complete with booze and babes and a video team to capture the whole thing,” Fous says.

By all appearances, he should have been happy. But looks can be deceiving.

“I got caught up in the lifestyle marketing game,” Fous says. “I was portraying a persona on social media, but that persona wasn’t me. I was playing a character a lot of people hated—all for likes and money. It ate away at my soul.” Fous was depressed, without a purpose. “My life revolved around material things. My only ‘why’ was money.”

A tattoo across his heart says, “Success is walking from failure to failure without loss of enthusiasm.” While Fous wasn’t a failure on the outside, he was failing the one person who mattered: himself. Until a Tinder date convinced him to sell everything in the pursuit of happiness.

An ‘asshole’ who had everything.

“Growing up, I wanted to be a stockbroker like my best friend's dad. His nice BMW, the suits, and the stock market fascinated me.”

Fous studied business finance in college. “During my sophomore year, my aunt got a ‘hot tip’ on some speculative biotech stock called Cytomedix. At $4 per share, we went all in as a family—investing $500,000 in inheritance money, and even my car. I got bored and sold my shares at $6, but my family kept theirs. Then one day the stock went bust and dropped to 50 cents.”

While Fous made a profit, his family lost half a million dollars in one day. “That was my ‘wow’ introduction to the market, and it hit me hard. I realized that investing was a dangerous game if you don’t know how to manage risk. I was hooked—my career had begun.” 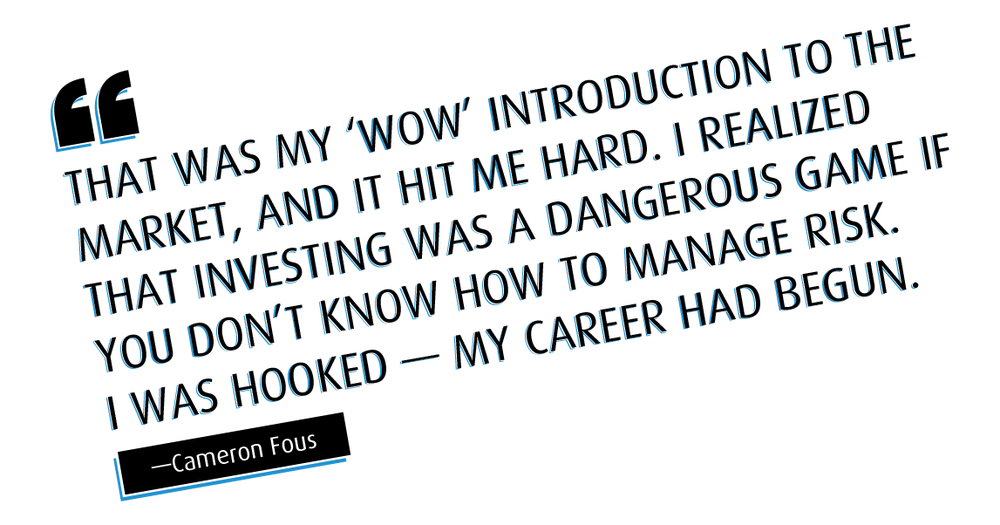 Fous started day trading online and managing a trading advice blog where he gave investment tips away for free. It took him three years to become profitable. “After 12 months of trading, I had a strategy. But it took two more years until I had the emotional discipline to follow it. I would make thousands one day, then blow it all the next.”

By his senior year, Fous was making money, so he dropped out of college to pursue trading full time. He launched Fous4Trading.com and began charging for his advice. In the first month, he made $30,000. 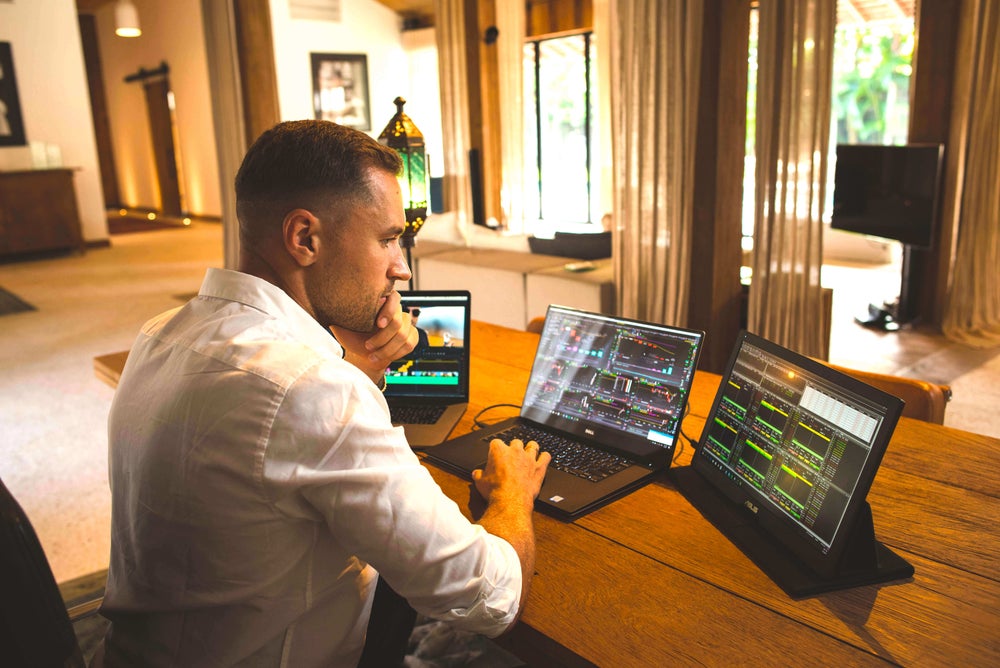 Everything skyrocketed from there. In one month alone, he made more than $70,000 trading and $100,000 teaching others to do the same. Fous moved from Oregon to San Diego, Calif.

He bought three cars: a Maserati GranTurismo, custom 1968 Camaro, and a brand-new Range Rover to pull his $100,000 wakeboard boat, which he took out with friends every summer weekend. He was living in a $1.2 million bay-front penthouse.

Fous doesn’t sound self-impressed when discussing it. “You’re probably thinking, ‘This asshole has everything, how could he possibly be unhappy?’” 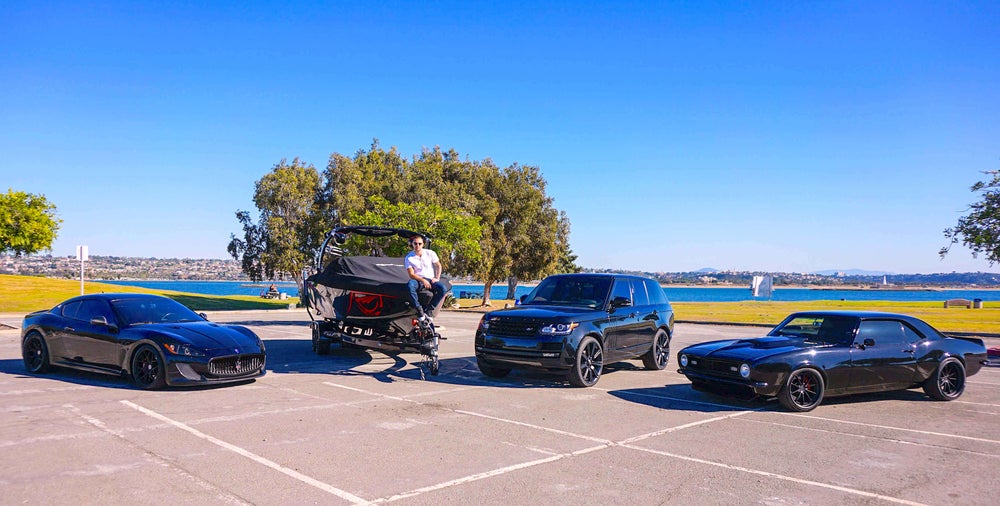 As the Fous4 brand took off, Fous became a social media personality. He got caught up in the party scene, selling the glamorous day-trader lifestyle to students who wanted to emulate his success.

“There’s a misconception that online ‘celebrities’ have the best life—that’s the problem with social media,” he says. “Many of us are dying inside because of the pressure to portray what others expect from us. Everyone struggles, despite what you might see portrayed online.”

Fous explains that money didn’t fill his empty void. When he didn’t have money, he thought it would solve his problems. It didn’t. “I understand why you would think rich people are jerks for being unhappy,” he says. “There’s a reason why people say money doesn’t buy happiness.”

In 2016, more than a decade after he started trading, Fous matched with a girl on Tinder named Sandra. “It was love at first date. That day, she met my mom, stayed the night, and basically moved into my apartment. Crazy, I know,” Fous says with a laugh.

“Sandra inspired me to be me—not for money but for my own wellbeing. It was refreshing, and the push I needed to make a change.”

Sandra had been traveling full-time while working on the road for two years. They took a trip to Mexico City and Colombia together. There, Fous decided to move to Miami to be on the Wall Street time zone. His teammate would also move from New York so they could set up an office with his business partner, who already lived in Miami.

Fous sold everything—the cars, the watches, the boat. He went to Miami for a week and signed a lease for an apartment in the five-star Kempinski Hotel downtown. But something wasn’t right in his gut. “Money and business were telling me, yes, but my gut was screaming no.”

Meanwhile, Sandra was still traveling full-time and going to Thailand for work. They talked about going together.

“When I sold everything, I felt free. I had nothing holding me down. Miami didn’t feel right, and I had an opportunity to leave everything behind and travel with Sandra. Traveling always made me happy—and I hadn’t been happy in a long time. I realized this might be my only chance to do something like this, and I’d regret it for the rest of my life if I didn’t.”

It was a tumultuous week in Miami as Fous went back and forth. At the last minute, he backed out of his lease. “The guys were crushed; I felt like I failed them. I don’t think I’ve ever cried so much in my life. It was the hardest decision I’ve ever made, but the best one.

“I realized that the pursuit of happiness is a selfish road. I let down my team to do what was right for me and my wellbeing. Sometimes you have to be selfish to become the best you can be—otherwise you’ll never truly be able to give back to others.”

Fous gets emotional discussing why the pursuit of happiness is a selfish road.

Together, he and Sandra traveled to Asia, Europe, and South America while Fous continued to day trade and manage Fous4 remotely. He started eating healthier and drinking less. He woke up to his internal clock, not an alarm clock. Instead of a Range Rover, he drove a scooter. Playboy even hired the couple to film a luxury travel show. They shot several episodes in exotic locations, including their own private island, before the show was cut.

“I learned that all that matters is time and the memories you create. Don’t get me wrong, I still love my cars and Rolex watches,” Fous says. “But those things were a short-term high to mask my internal brokenness. You have to be happy first to enjoy the ‘stuff.’

“Now I live out of three suitcases. I’ll take that over three cars any day. You can’t put a price on freedom.”

A few months before he and Sandra left for Thailand, Fous started a YouTube video blog, IKNK (pronounced Iconic). “It hurt seeing social media comments saying, ‘Screw this guy, he’s an asshole.’ I wanted to show people who I really was beyond the day trader image I portrayed.

In one week, Fous made $14,000 trading stock as a digital nomad in Thailand.

When you watch his old videos, you can see why people might dislike him. Fous has a swagger and a lifestyle that seems unattainable. But when Fous began to document his journey as a nomadic day trader, you can see authenticity and vulnerability. Off camera, he’s even more down to earth.

“I wanted to inspire people to change their lives for the better if they are unhappy like I was. The influx of positive feedback on the travel vlog was overwhelming.” He sounds prouder than he ever did talking about his former life. “People told me how much they needed to hear what I was saying. I finally felt good about what I was doing.”

At the end of 2017, Fous and Sandra broke up in South Africa after a year of dating. Fous continued travel vlogging and day trading. After 13 years, trading only took an hour each day, but he was tired of talking about money. 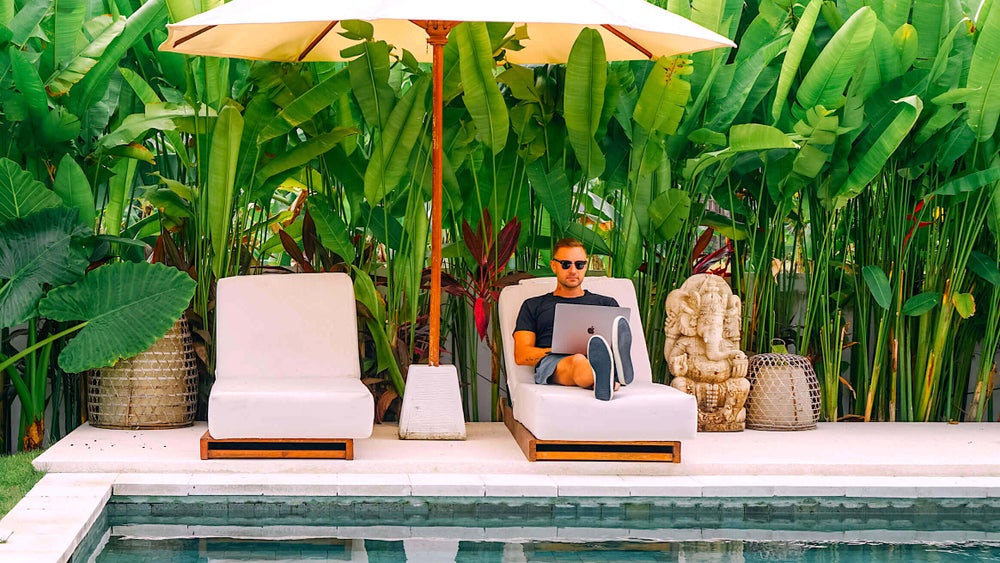 “I wanted to do more than help people make money trading. I would rather talk about what makes people happy—and how to grow their business authentically without feeling like they’re ruining their personal integrity.”

Earlier this year, Fous launched a new YouTube show The Profile. He talks with iconic influencers, entrepreneurs, and creators around the world about how they pursue business, pleasure, and bliss in their lives. Branding-wise, the show is highly unique; each episode is filmed in a different exotic location, and the video production quality is high.

On #TheProfile, Fous interviews people who he believes are living iconic lives.

“I want to smash the myth that happiness comes from being successful. The show is about how to get out of your comfort zone, be successful and happy, and live a life of purpose. I was fortunate enough to make positive changes in my life and finally find purpose in my career. I want to inspire others to do the same.”

Fous still works with his team running FOUS4Trading.com, with a focus on mentoring students and helping them master the psychology of day trading. “I have big plans for IKNK and Fous4. But right now, my goals are to prioritize meaningful relationships and be happy—which is what it takes to run the best companies in the world.

“Happy is the new rich.”