The technologies are penetrating industries will greater speed, making way for human resources to upskill

Human jobs are in danger as artificial intelligence is ready to take over almost half of our tasks by 2022. As per World Economic Forum’s report The Future of Jobs 2018, infusion of new technologies in the system is leading to a complete transformation of how industries around the world function. Robotics and machinery have already started taking over human tasks but AI is far more disruptive.

The technology has already started finding applications across business operations in various departments, benefitting the company’s productivity. WEF report has suggested that by 2022, “59% of employers will have significantly modified how they produce and distribute by changing the composition of their value chain.”

“AI and ML make the digital workplace “smart”. Even though there is a hype that brings a sense of insecurity to the workflow, AI and ML only work with the inputs gives by its users. Working collaboratively, a digital workforce enhances overall productivity, efficiency and the reach to the customer base,” said Rama Krishna Kuppa, the founder and CEO of ONGO Framework.

As per the investment plans of major companies, they are expected to expand their adoption of technologies and make extensive use of cloud computing along with machine learning and augmented and virtual reality by 2022. The demand for humanoid, aerial or underwater robots across all sectors will reportedly increase in the coming years depending on the requirement of each industry. 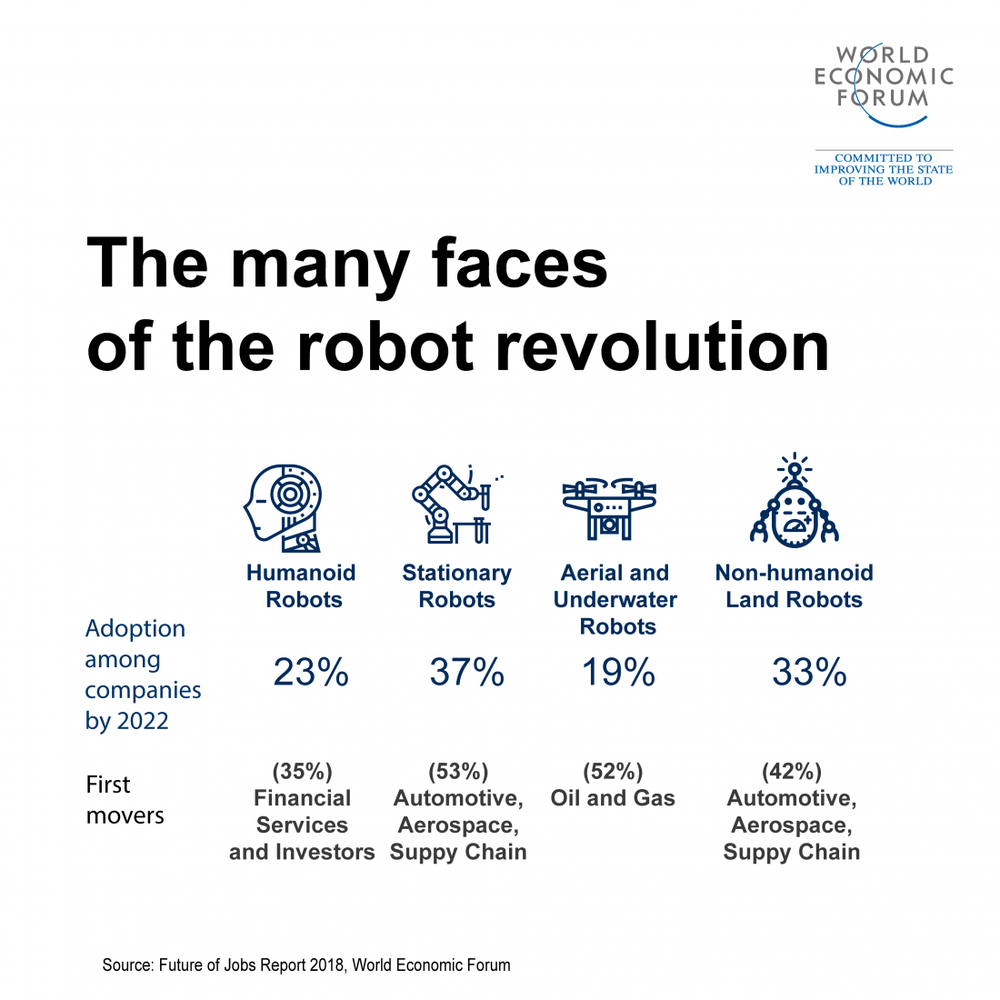 “These technologies will only take away menial, repetitive tasks, leaving human professionals freer to pursue more engaging and value-driven endeavours which require them to utilize human-only skills such as creativity and teamwork etc which will also lead to enhancing job opportunities in the newer age skills,” believes Zairus Master, the CEO of Shine.com.

With the domination of automation in a business framework, the workforce can be extended to new productivity-enhancing roles. More than a quarter of surveyed businesses expect automation to lead to the creation of new roles in their enterprise. Apart from allotting contractors more task-specialized work, businesses plan to engage workers in a more flexible manner, utilizing remote staffing beyond physical offices and decentralization of operations.

Among all, AI adoption has taken the lead in terms of automation for the reduction of time and investment in end-to-end processes. “Currently, AI is the most rapidly growing technology and will for sure create a new era of the modern world. It is the next revolution- relieving humans not only from physical work but also mental efforts and simplifies tasks extensively,” opined Kuppa

While human-performed tasks dominate today’s work environment, the frontier is expected to change in the coming years. “In 2018, an average of 71% of total task hours across the 12 industries covered in the report are performed by humans, compared to 29% by machines. By 2022 this average is expected to have shifted to 58% task hours performed by humans and 42% by machines,” says WEF report. 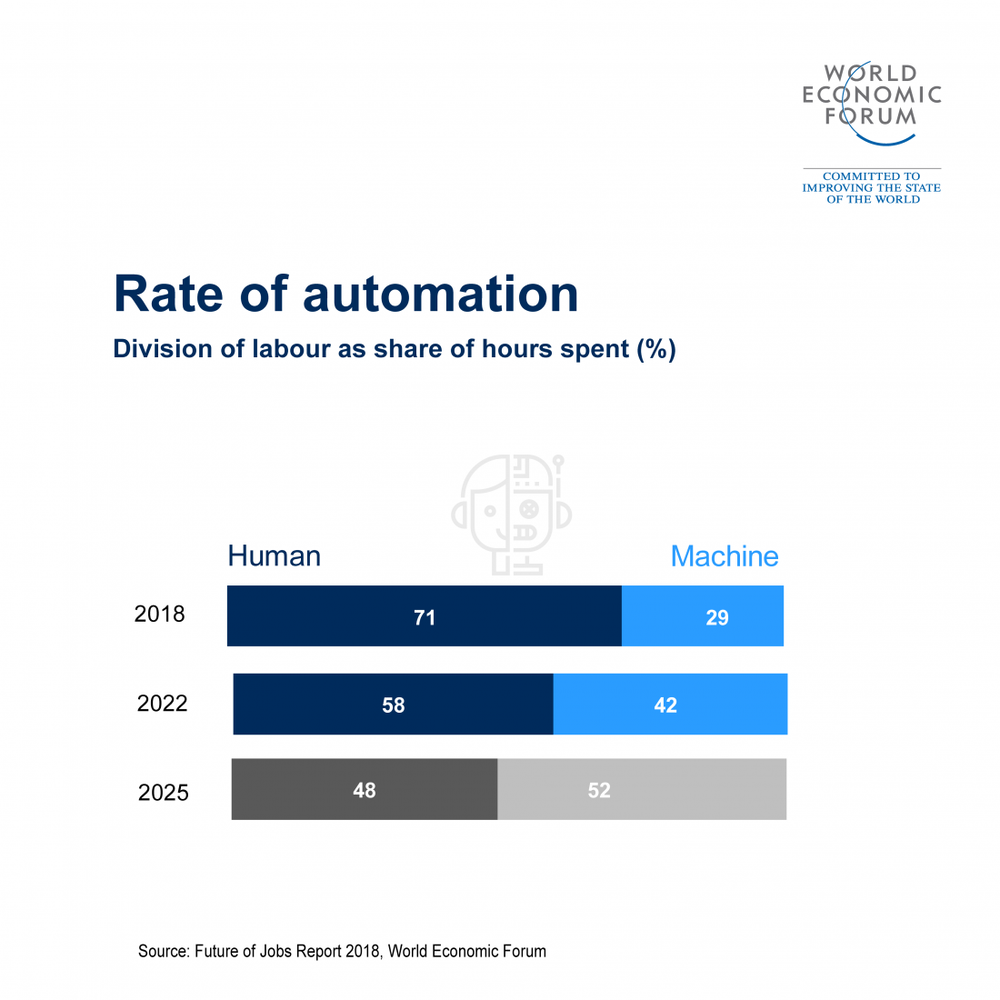 The global data shows that AI is slated to penetrate every sector. While the software industry remains the topmost consumer of the technology, education, hardware and networking, finance, and manufacturing are also catching up. LinkedIn’s AI skill penetration index from 2015 to 2017 showcases a massive transformation in the use of automation in most industries. 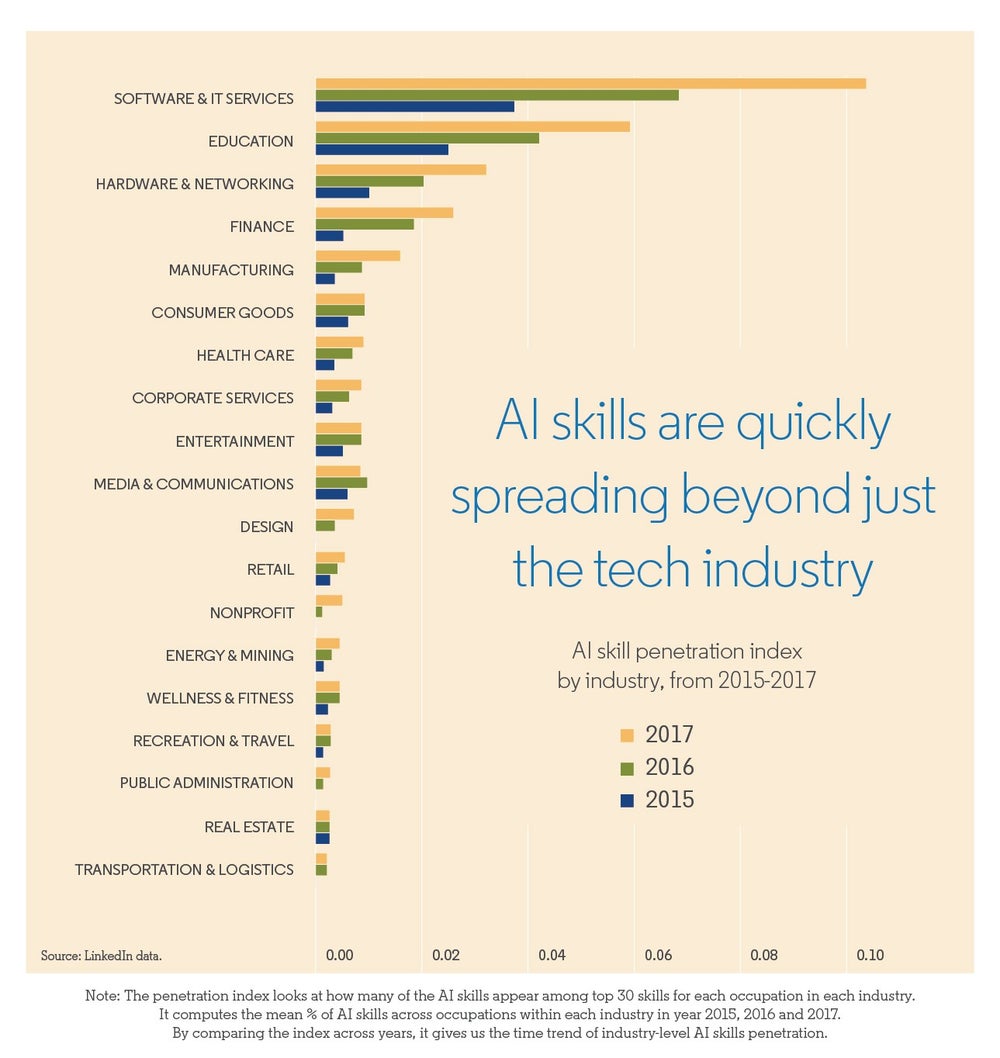 After the United States and China, India is among the top countries to have the highest penetration of AI skills among its workforce. Nonetheless, the human resources need to upskill as time goes. While roles like Marketing Specialists and Managers, Human Resources Specialists and Consultants, and User Experience Designers can’t be automated, there is a number of highly automatable jobs.

“The growing penetration of cutting-edge technologies and smart mobile devices has ushered in widespread transformations within the online recruitment industry, particularly in the end-user behaviour,” Master believes.

Over the past 5 years, a remarkable decline in jobs in automatable occupations has been noted. These occupations include Administrative Assistants, Customer Service Representatives, Accountants, and Electrical/Mechanical Technicians. LinkedIn has segregated the occupations as per their respective growth and decline in providing jobs. 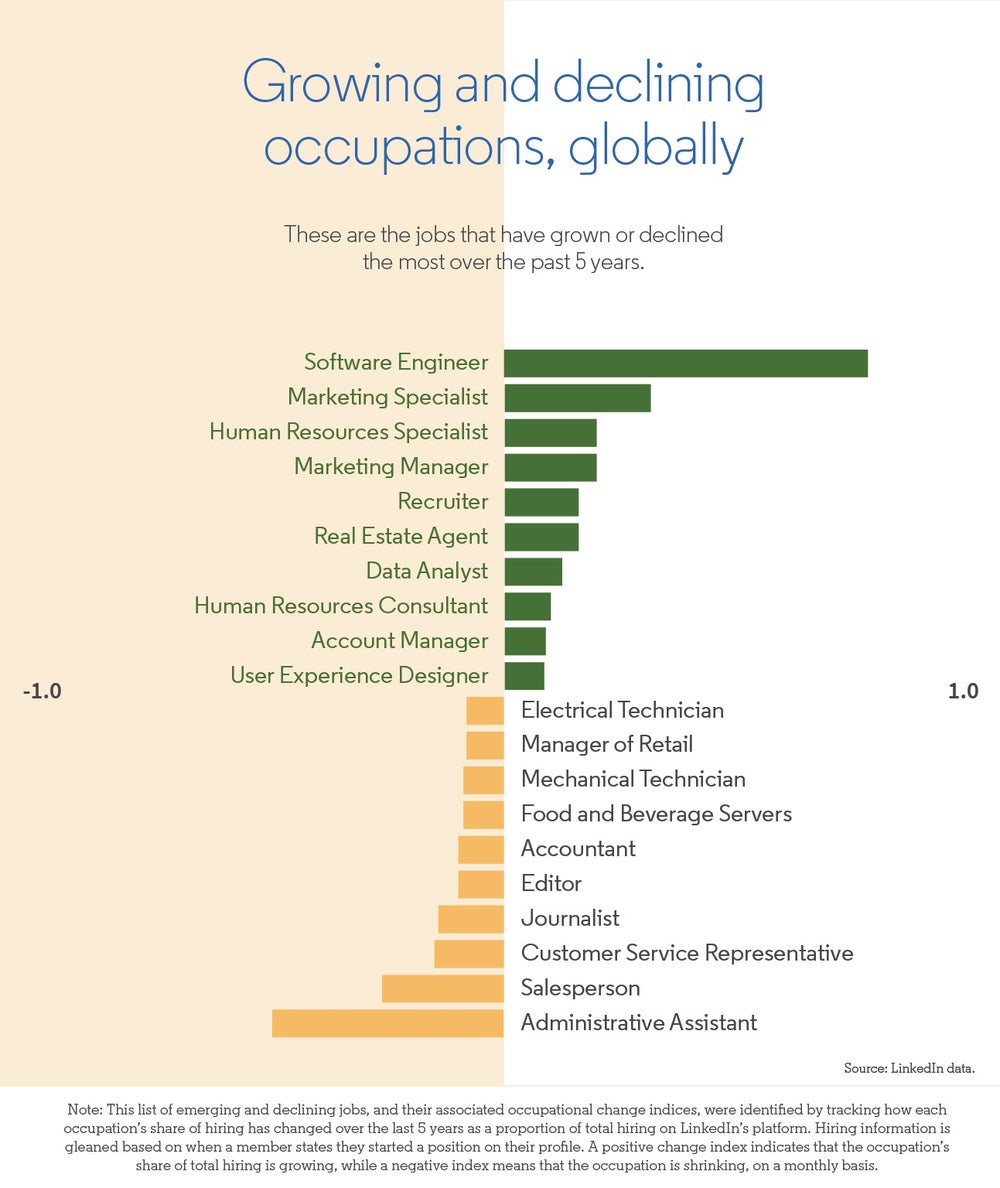