Indian Employees May Get 10% Wealthier in 2019, Study (Infographic)

According to the Willis Towers Watson Survey, India is projected to gain a 10% hike in salaries

By Aastha Singal October 7, 2018
Opinions expressed by Entrepreneur contributors are their own.
You're reading Entrepreneur India, an international franchise of Entrepreneur Media.

India’s working class is eagerly awaiting the arrival for 2019 due to two good reasons - the rising inflation and approaching elections. Now, there is another factor to further hike their excitement. Willis Towers Watson’s 2018 Salary Budget Planning Report has predicted a 10 per cent rise in the salaries of Indian employees in the coming year.

Notably, the salary hike in India has been stabilized at the 10 per cent mark since 2016, maintaining it as the highest salary increase in comparison to other Asia-Pacific countries. Looking at the other major countries, salaries in Indonesia is projected to increase at 8.3%, China at 6.9%, the Philippines at 6% whereas Hong Kong and Singapore both at 4%.

The data services practice leader of Willis Towers Watson for the Asia Pacific, Sambhav Rakyan attributed India’s continuous growth in salary increments to the steady economic growth, progressive reforms and cautious optimism across sectors. He further suggested that Indian companies might not see much growth in salaries as compared to the MNCs operating in the country.

The figures are likely to change in the near future immensely due to the high adoption of workplace automation, artificial intelligence and robotics that will reshape a new combination of work, talent, skills requirements and work relationships. Organizations will re-examine their talent strategies along with their remuneration and reward policies for the future.

Willis Towers Watson India’s Director of Rewards Arvind Usretay expressed that India’s dependency on base pay to drive performance and differentiation is likely to be challenged in the near future as the demand for sharper linkage between performance and pay grows further. “The future of work is rapidly creating demand for niche and specialized skills, pushing companies to re-evaluate their total rewards programmes,” he said.

The Technical Skilled Trade is projected to see an increase of 48 per cent in recruitment, affecting the Auto industry the most due to government’s push for electronic (green) vehicles whereas the demand for Li-Ion battery engineers may contribute to Engineering sector levelling up to 45 per cent. While the demand for specific IT skills such as Machine learning, DevOps, UI/UX, Blockchain is expected to grow at the cost of generic skills at 39 per cent, marketing will also witness crucial recruitment growth by 12 per cent.

Looking by the employee positions, salaries at the Executive level are projected to see a marginal increase of 0.1 per cent to reach 9.8 per cent whereas mid-management has arrived at 10 per cent. The production and manual labour, however, is predicted to witness a drop from 10.1 per cent. The report looks at a range of job grades across various industry sectors to guide the companies for their annual salary forecasting. 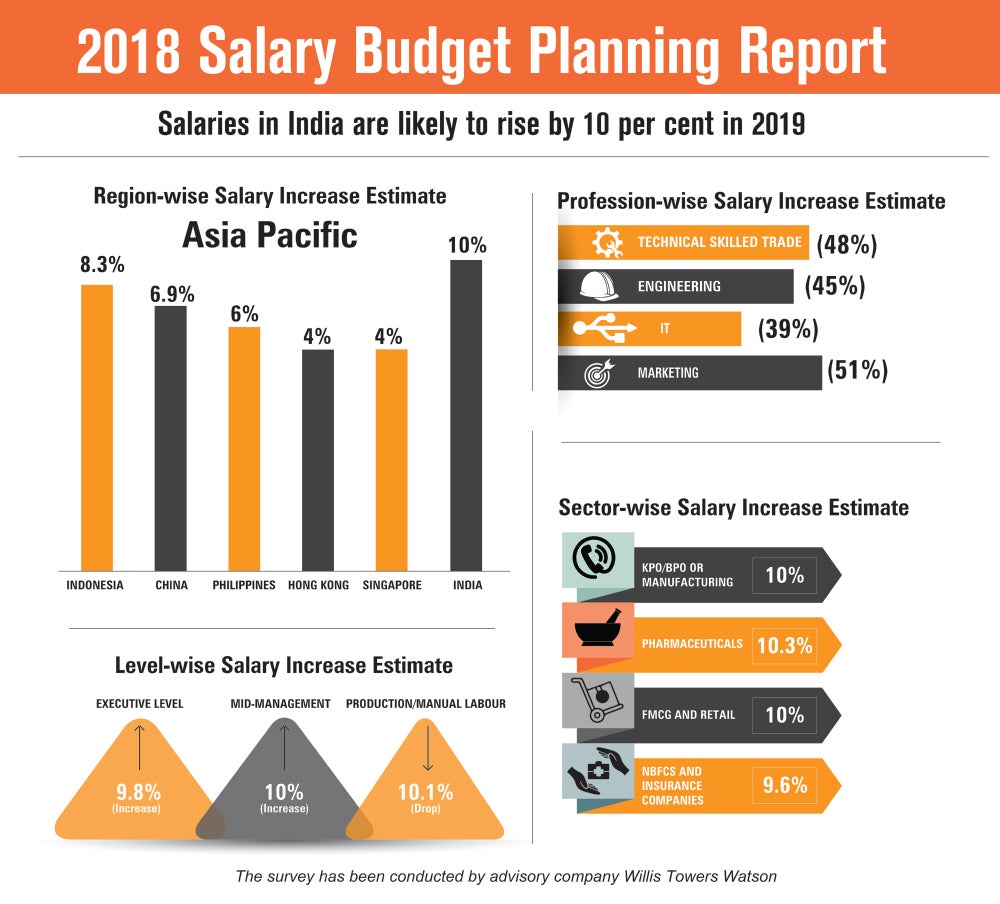 How to motivate your employees (without money)

How much should a mom earn?