European Tech Ecosystem: A Look at the Rising Trends

Is London the Silicon Valley of Europe? Wait, there is more to Europe than just London; here is what a few reports have to say about the emerging tech trends and innovative cities in the region

By Diksha Dutta November 26, 2018
Opinions expressed by Entrepreneur contributors are their own.
You're reading Entrepreneur India, an international franchise of Entrepreneur Media.

What an exciting time it is to be in Europe. The wait to see the next $100 billion tech company (after SAP) is getting shorter. Data by World Economic Forum implies that while European Venture Capital is still not pulling in as enormous amounts like raised by US funds, its rise has not gone unnoticed. Over the last five years, North American investors contributed around 10 per cent of capital invested in European VC funds – double the average for the previous five years. A recent report by tech.eu says that early stage investment in Europe continues to grow on average quarter to quarter. In Q1 2015, the early stage in investment topped out at just over 400 million (EUR), but by Q2 2018, this total expanded to over 2 billion (EUR) for the quarter. While the US and China are still the economies that have given rise to the most disruptive tech giants in the world, Europe is catching up at a significant pace which is a little difficult to ignore.

This article focuses on the tech hubs that are decreasing the significant gap between the US, Asia and Europe, and technology trends that are leading the way in this race.

From a distance, you would only assume that London, Berlin and Paris are the places to be in Europe if you want to startup or want to take up your next job in tech. But that is not the case. The potential of cities like Amsterdam, Munich, Stockholm, Zurich is no less!

A research by Karin Patenge (working for Oracle in Germany) and Data Natives (a conference in Europe for the Data-driven generation which covers topics such as Artificial Intelligence, Blockchain, Data Science, Big Data) studied a dataset of Meetup.com tech communities across Europe. By parsing data from roughly 12,000 Meetup.com groups in 12 key European tech capitals, the study discovers which cities are key hubs for the latest tech innovations, from AI & Machine Learning to Blockchain.  The topics covered in the study are Big Data/Data science; AI/Machine Learning; Blockchain; Healthtech; Sustainability; Govtech; Mobility; Fintech; Marketing; Internet of Things.

Top 10 Topics ranked by the number of Meetup Groups assigned: 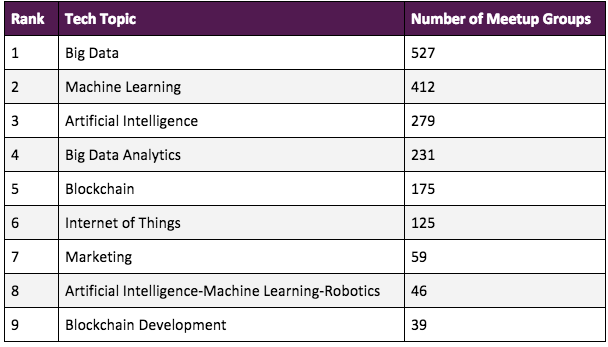 Karin Patenge, Principal Solution Engineer from Oracle notes, “Among the set of topics specified for the research,  the highest focus in terms of numbers of groups and total members of groups is on Big Data and Machine Learning. In relation to all existing topics that are assigned to Meetup Groups, there is only a higher focus on (software) development related topics like Software Development or Computer Programming or Open Source.”

London leads in tech innovation, Amsterdam is the new kid on the block

Not to much surprise, London is the leading city in Europe in terms of tech communities organized via Meetup.com. According to a ranking based on the PageRank algorithm, London is followed by Berlin and Paris. The highest degree of centrality has groups with more than 1000 events organized like London-based Meetup groups "London Indie Game Developer" and "Skills Matter - X Matters Series - Free Developer Events" or "Appsterdam" in Amsterdam. "Software Development" was the highest ranked topic for tech communities due to active Java developers organized in groups like virtual "Java User Group" or "LJC - London Java Community" both located in London.

Another study by intelligence platform Quid reveals how London is almost at par with Silicon Valley when it comes to innovation. Bob Goodson, CEO of Quid says in a recent report,  “As the founder of a technology business with a presence in both London and Silicon Valley, I’ve experienced first-hand the fantastic spirit of innovation and entrepreneurship in both regions. Our research demonstrates that London and Silicon Valley share strengths in a number of exciting sectors such as Cybersecurity and AI and it shows there are lots of opportunities for collaboration. While Silicon Valley has a strong tradition of producing some of the world’s leading tech companies, the research also suggests that London is gaining ground and should also be considered a leading global destination to scale a tech business.”

The most surprising result of her study according to Karin was the importance of Amsterdam, which is a relatively small city (compared with other cities in the report), as a hotspot for active tech communities and has a pool of over 250K tech workers in the city. Amsterdam does not only seem to have this huge pool of tech workers but also many of them belong to Generation Y and Z who IMHO are embracing new forms of communication more easily than the generations before.

Elena Poughia, Founder and Head Curator at the Data Natives Conference emphasized the importance of Berlin as a tech hub in Europe. “Divided between the east and the west it represents and encompasses far more than just a cheap city for nomads. It possesses the depth and dimension of the past and the present.” She notes that Blockchain is booming in Berlin at the moment with projects like Big chain DB, XAIN, IOTA and others penetrating the market. Berlin is known for their company builders such as Rocket Internet which sprung companies in e-commerce and food tech. There seems to be significant activity in Healthcare as there is time for personalized medicine and for patients to claim their own data - healthcare is data, from DNA sequencing to drug distribution.

According to the tech.eu report titled ‘Seed the Future:  A Deep Dive into European Early-Stage Tech Startup Activity’, it would be safe to say that Artificial Intelligence, Machine Learning and Blockchain lead the way in Europe. The European Commission has identified Artificial Intelligence as an area of strategic importance for the digital economy, citing it’s cross-cutting applications to robotics, cognitive systems and big data analytics. In an effort to support this, the Commission’s Horizon 2020 funding includes considerable funding AI, allocating €700M EU funding specifically.

Blockchain remains new, and the growth and utilization of blockchain technologies outside of Bitcoin has been associated with considerable hype and speculation. According to the EU Blockchain report, London (2nd place) and Paris (6th) were among the top 10 cities for blockchain development. Based on the number of projects started, developers from the UK and Germany are among the most active in the blockchain field on Github (around 3,000 developers together), with strong developer activity in such other European locations as France, the Netherlands, Spain and Switzerland.

The coming decade will define many significant shifts for Europe- whether it is the dominance of tech hubs or the emergence of newer startups in AI, Blockchain or Machine Learning.

(Disclaimer: Views expressed by Karin Patenge are her own and do not necessarily reflect the views of Oracle)