From a bootstrapped venture to India's most sought-after food tech platform, Swiggy had an inspiring journey

Like any other startup, Swiggy had its own journey, filled with many ups and downs, highs and lows but what contributed to its triumphant position today is the consistent efforts to adapt the everyday changing factors, obsession to serve the customers, foreseeable sight into the logistics operations and the never back down attitude of its three founding members.

Bootstrapped till January 2015, the foodtech startup has come a long way. Launched only 4 years ago, Swiggy today is one of India’s fastest growing internet companies and has one of the greatest success stories to boast about. Among the 18 Indian unicorns, out of which 8 including Swiggy joined the club in 2018, the food ordering and delivery platform’s vision and business strategy have impressed the investors the most.

“Swiggy has the winning formula and will continue to build a leading business in the country,” claimed Larry Illg, CEO Food and Ventures, Naspers after the VC firm led the startup turned unicorn’s latest mega round of investment. With the staggering $1 billion, the firm plans to strengthen its technology backbone and focus on building the next-generation AI-driven platform for hyperlocal discovery and on-demand delivery.

Let’s have a look at Swiggy’s arduous journey from a late entrant of India’s e-commerce wave to India’s largest food delivery platform:

2014: Coming from diverse backgrounds, Sriharsha Majety, Nandan Reddy and Rahul Jaimini had faced their share of failures before trying their luck with Swiggy. The first two are BITS-Pilani graduates who have together built a technology product called Bundl in 2013 to connect courier companies across India. However, they soon had to shut shop and decided to explore the food-delivery space.

They had the vision to build a sustainable and sound business model along with a strong product mindset but lacked the technical chops required to build an internet company. Then entered Jaimini, a former Myntra software engineer and IIT alumni. As the three co-founders put their respective skills on a table, a distinctive online food ordering startup, Swiggy was born on August 2014.

2015: Within a year of launch, Swiggy had convinced many restaurants who were earlier vary of the online channel of delivery to join forces with the platform. What differentiated it from other players is their investment in building a proper logistics network with a vast fleet of their own delivery boys. It especially focused on customer experience due to which their clientele didn’t mind when they started charging for deliveries.

Seeing their business model working seamlessly, many investors got interested in funding the venture and Swiggy received its first cheque of $2 million from Accel and SAIF Partners. In the same year, the two VCs again funded the startup along with Norwest. By then, the startup already had over 100 restaurants on board and was delivering over 70,000 orders on a monthly basis.

2016: The funding boom of 2014-2015 soon died down but Swiggy was yet to come down from the high. Once a major competitor in the food tech space, TinyOwl lost its presence, merged with Roadrunner to create Runner and got acquired by Zomato within a span of a few months. While that was happening, Swiggy’s losses jumped 65 times for the year ended March 2016 and hence, the year was spent on cutting costs and strengthening its logistics network.

A bit of outsourcing by tying up with third-party logistics players had also started to further the efforts of building a sustainable network. Earlier in the year, the platform had caught the eyes of some global investors including Singapore-based RB investments and New York-based Harmony Partners. In September, another influential VC firm, Bessemer Venture got associated with the startup.

2017: With 6x growth in 3 years of its launch, Swiggy was leading the Indian food tech space, thanks to its customer understanding and adaptability. By 2017, the startup was introducing disruptive and highly differentiated service offerings. Understanding need of the hour, it increased investment across core engineering, automation, data sciences, machine learning and personalization.

In particular, cloud kitchens— a programme that allows its restaurant partners to set up kitchen spaces in areas where they don’t operate, introduced back in 2015, had started creating a buzz among the millennials. The year witnessed Swiggy raising its biggest investment of $80 million in Series E round of funding led by Naspers, as other existing investors also participated.

2018: The year had brought along a rollercoaster of experiences for one of India’s most sought-after consumer internet firms, marking one milestone after the other. With its focus on building real-time prediction and optimization systems to help customer choice and bring in personalization with speed of deliveries, Swiggy’s goal was to change the way India eats.

Amid strengthening its leadership, introducing multiple initiatives including Swiggy Access and Capital Assist, all in all undergoing a revamp and the team claiming to have seen a 500 per cent increase in revenues from the last financial year, the top-rated app attained the unicorn status, becoming the fastest growing Indian startup.

Soon after receiving $100 million from Chinese investor Meituan-Dianping and Naspers in February, the Bengaluru-based firm raised $210 million, taking its valuation to $1.3 billion. The unicorn recently closed the funding of staggering $1 billion led by existing investor Naspers. New investors - Tencent, Hillhouse Capital and Wellington Management Company, also came on board. With this funding, Swiggy has left the competing Zomato and FoodPanda way behind in the space. 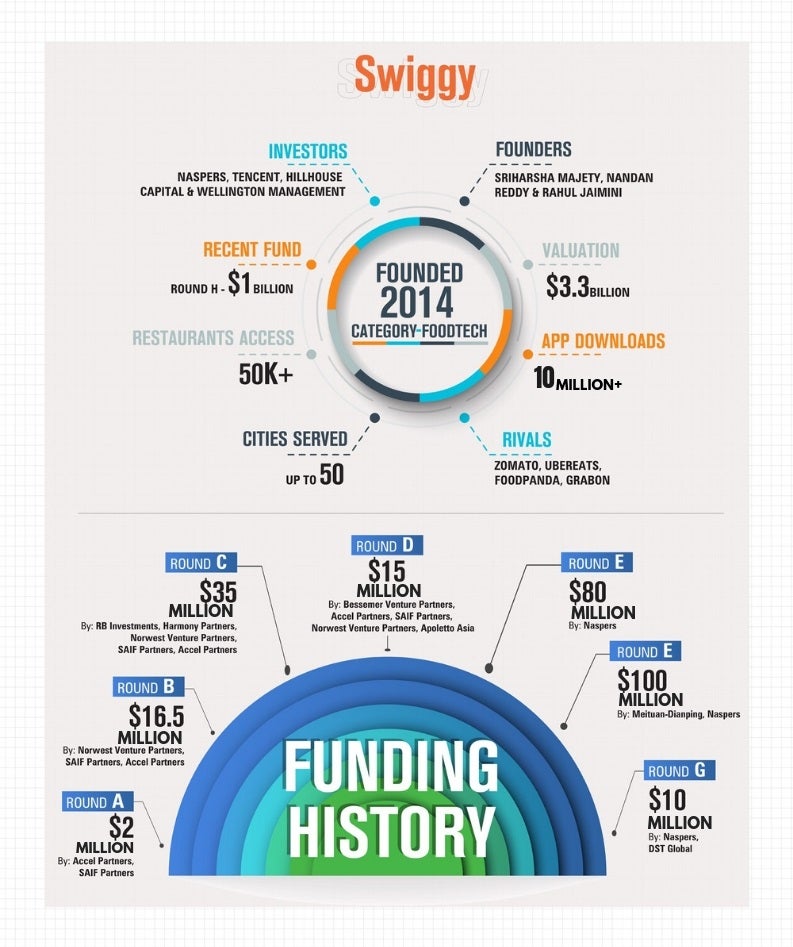