Their opposition to Howard Schultz's presidential ambitions is mostly due to concerns that his candidacy could help reelect Trump.

Howard Schultz's discussion of a presidential run has hit a nerve with Starbucks workers.

Dozens of baristas, store managers, and other Starbucks workers are speaking out -- both online and in interviews with Business Insider -- about Schultz's announcement that he is considering running for office as an independent centrist.

However, many current and former workers are begging the former CEO and chairman to end his presidential run before it begins, for both political and practical reasons. At least one Starbucks barista is planning a walkout and threatening to quit the company if Schultz runs.

"I haven't worked a shift since he teased a run, but I have been planning on going into the store and talking with my coworkers about a walkout in the event of Schultz announcing his candidacy," a 22-year-old Starbucks worker based in Santa Cruz, California, told Business Insider.

The employee -- as well as the five other Starbucks employees Business Insider spoke to for this article -- asked to remain anonymous in order to speak frankly without jeopardizing their jobs. 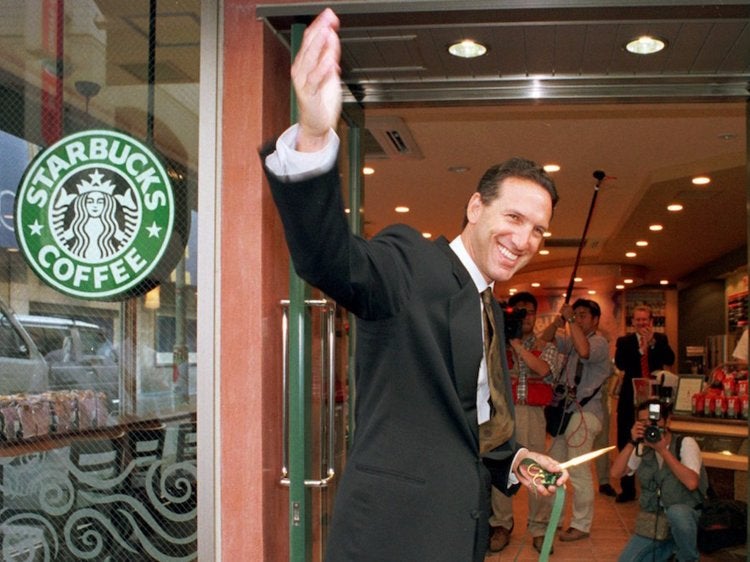 The Santa Cruz Starbucks worker expressed concerns that Schultz's "antiquated platform" could split the progressive vote, an opinion shared by many Democratic strategists. If Schultz runs in earnest, the employee said, he plans to quit the company and find work elsewhere, even if he does not organize a walkout.

"At best he's running on an ill-informed and out-of-touch platform, and at worst he's running for selfish reasons that come from the egotistical disconnect a billionaire must develop (reminiscent of one Donald Trump, in my opinion)," he said.

Another Starbucks employee who has worked at a Connecticut Starbucks location for roughly six months expressed similar concerns. While he believes Schultz did an impressive job shaping the company into a tolerant and inclusive environment, the employee said the former CEO's decision to run as an independent candidate without any political experience worries him.

"The presidency is one of the highest offices in the United States, not an entry-level position. ... Running a business or a corporation is not the same thing and in no way qualifies an individual to become president," he told Business Insider. "The last time America gave the presidency to a political outsider and a businessman, it resulted in Donald Trump's current disastrous presidency."

Schultz is generally respected by Starbucks employees, both on a corporate level and in stores. Under Schultz's leadership, Starbucks rolled out benefits such as healthcare, parental leave, and tuition coverage for baristas and other in-store workers. Some baristas even affectionately call him "Uncle Howard."

A third employee who has worked for Starbucks in the Midwest for roughly 20 years told Business Insider that she cried when Schultz quit the company in 2018. While she said she has long respected Schultz's values, she desperately hopes he does not run for office as an independent candidate.

"Howard lives by the values he instilled in us as a company," she said. "I simply believe this is the wrong path for him and for us at this point in time ... for the sake of our country."

Other workers feel that Schultz has not done enough to support Starbucks employees or other service workers, and that his immense wealth makes him disconnected from the average American's life. One college student who said she makes roughly $9 per hour working at Starbucks highlighted the fact that Schultz and other CEOs make hundreds of times what the average worker earns.

"I'm sure he will be going full force against the 'fight for 15' led by politicians like Bernie Sanders who are hoping to get workers the compensation they deserve," the employee told Business Insider.

Starbucks reported in a recent filing that the "median employee," a part-time worker in California, made $12,754 at the chain in 2018. CEO Kevin Johnson made $13,382,480, or 1,049 times the median employee. Despite having a $1 salary, Schultz actually made more than Johnson in 2018, earning $30.1 million in total compensation from the company including his bonus, shares, and options.

Other former and current Starbucks workers spoke out against Schultz's potential run on social media, many citing fears that Trump could be reelected.

#tobeapartnernotapresident as a former (and probably future) Starbucks partner and fan of the way Howard Schultz ran his company, I sincerely hope he doesn’t jeapordize our effort to deny Trump a second term by swerving out of his lane and into this presidential race

Mr. Schultz, former partner here. I admire you and find your story inspirational. You were the first to give benefits to part-time workers. You gave America a safe place to meet people buying our camera gear on craigslist. But please. Please. Don’t do this. Please. https://t.co/nDf9qAG8Pf

As a former Partner & continued loyal Starbucks fan, I really wish #HowardSchultz would SERIOUSLY reconsider. In the words of @kathygriffin,

While Starbucks workers have circulated rumors about Schultz's political aspirations for years, it's likely few would have guessed he would run as an independent -- something that has caused many to criticize the campaign. And, progressives have reason to be concerned about Schultz's run, according to Democratic strategists.

"I take him at his word that he's well-intentioned, but this is a rich man's fantasy that will turn out to be nothing more than a massive in-kind contribution to Donald Trump's reelection campaign," Ian Russell, a Democratic congressional strategist, told Business Insider. "There simply isn't a path for an independent. All the money in the world can't change the laws of political physics."

I’m going to say this because I mean it. As a former #Starbucks partner, I have nothing but love for #HowardSchultz. He’s compassionate, smart, successful, inspiring. And? If he runs as an independent, he will aid the re-election of America’s cancer. Howard, don’t. Please.

As a former, proud Starbucks partner, I beg you not to do this. You'd only be throwing the victory back to Trump. Focus on coffee and human resources. You are excellent at it.

I am a fmr @Starbucks partner and forever grateful for your leadership in the corporate world. But pls, respectfully, no.

A representative for Schultz did not respond to Business Insider's request for comment on Starbucks' workers concerns.

A practical case against Schultz 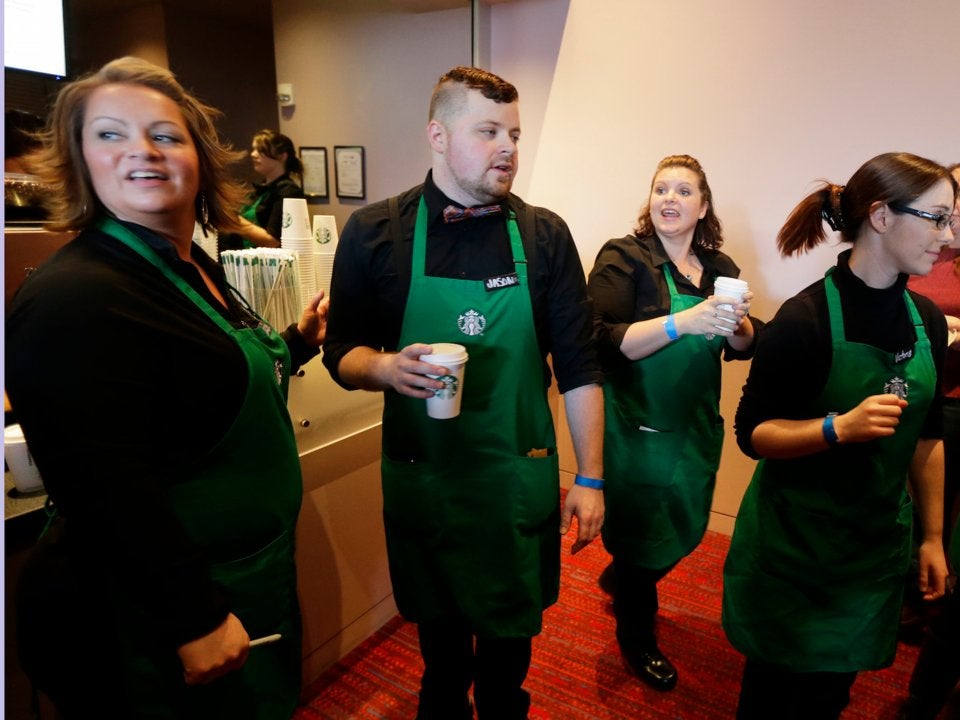 "No matter how they feel about it, [customers] are people expecting you to make political small talk despite the fact that your job is on the line if you say something in response that they disagree with or which upsets them," a California Starbucks worker told Business Insider.

"I have to just put on a big smile and hope to God they don't press me to comment beyond chuckling and anxiously trying to get to the next customer," the employee added.

"I would expect that because of Schultz's announcement, many customers will try to talk to us baristas about politics and Schultz while we are working," the Connecticut Starbucks worker said.

The employee said he had not been given guidance on how to react, but he is worried he could be written up if he does discuss politics with customers. Starbucks did not clarify its guidelines on political discussion when reached for comment by Business Insider.

Kevin Johnson, who took over as Starbucks CEO following Schultz's departure in 2017, sent a letter to all employees on Monday morning, addressing Schultz's presidential aspirations. 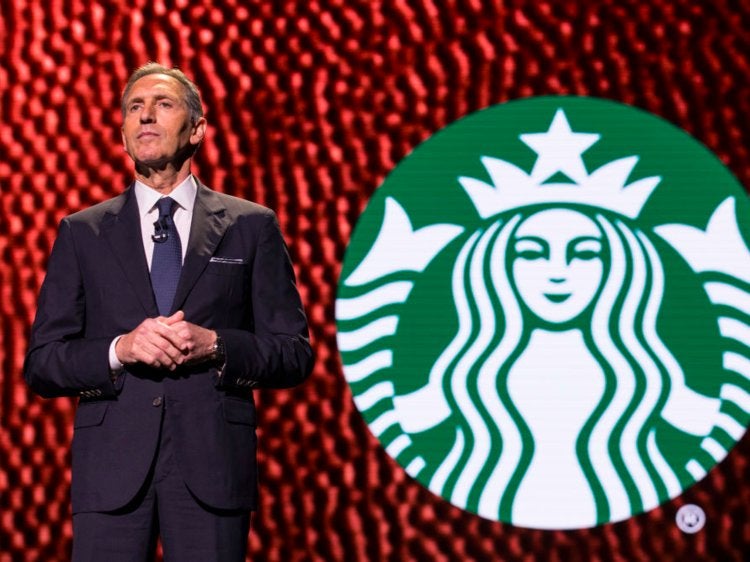 "I believe he really is trying to improve Americans' welfare," one Starbucks worker from Texas told Business Insider.

He continued: "I feel when he was at Starbucks, he was constantly focused on how to have partners ... gain opportunities to improve overall income while thinking of humanity and society issues. He's always been very conscious of social injustice and tried using his platform to help steer the country into its original values and beliefs."

As a Sbux barista, I’m a huge Schultz admirer. He’s a political liberal with common sense. Super excited he’s in the picture.

Considering that I'm a Starbucks partner, I am extremely excited to hear about this news. I have faith that Howard Schultz will bring this country back together and do what he thinks is best for the people. #PRguest https://t.co/InbCkbMFin

With more than 280,000 Starbucks workers in the U.S., it would be impossible for them to have a unified opinion on Schultz running for president. However, looking at the spectrum of reactions from workers speaking out, the voices of people begging Schultz not to run seem to be outnumbering those of his supporters.

Schultz's campaign is built on his reputation as a proactive and progressive business leader at Starbucks, with the cover of "From the Ground Up" labeling him as the "former Starbucks chairman and CEO." His time at the company earned him many employees' respect. It also put Schultz in the position to run for president, as well as to personally fund the campaign, which he has implied in interviews he would be able to do.

Writing a book "has prompted me to consider the many ways that each of us, as citizens, can give back to our communities," Schultz wrote in a letter to employees when he left Starbucks in 2018. "I'll be thinking about a range of options for myself, from philanthropy to public service, but I'm a long way from knowing what the future holds."

Now, as Schultz's future may hold a presidential run, many of his former employees are asking him to rethink his options.