Where India Wants to Work in 2019? Find Out Inside

Flipkart beats Amazon to become the most preferred workplace in India

India is moving towards the adoption of startup culture. Unlike a few years ago when youngsters preferred to get placed in traditional corporates, the trends have taken a drastic turn.  Up and coming tech organizations have taken the front seat leaving the conventionally-operated companies to take extra efforts scouting for talent as desired by their inflexible management.

What does the Millennial want?

Indian millennials, however, have caught up on the game and understand better where the future lies. According to the fourth edition of LinkedIn’s Top Companies list for India, home-grown e-commerce company Flipkart is the most preferred workplace for employees. What’s the point of consideration here is that this is the third time in the last four years that company has topped the rankings.

Notably, Flipkart’s acquisition by American retail giant Walmart in a $16 billion deal ended up making several ‘Flipsters’ millionaires, adding further to their job satisfaction. Led by the CEO, Kalyan Krishnamurthy, the Indian unicorn has a total headcount of 13,900 employees and houses popular verticals like Myntra, Jabong and PhonePe. 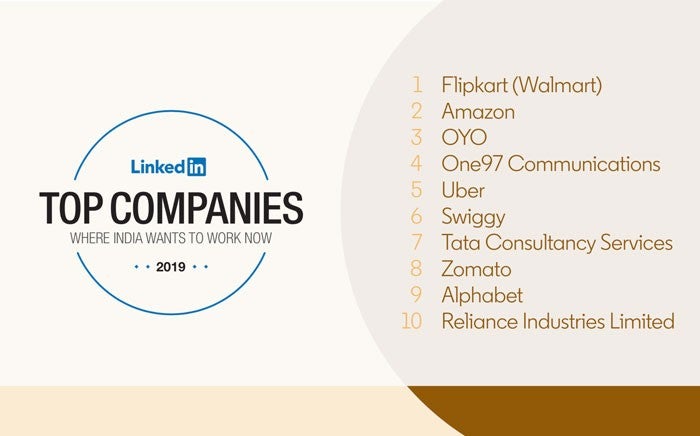 Following Flipkart is its long-time rival Amazon ranking second in the list. Despite the headcount of 50,000, America’s fastest growing e-commerce platform seems to be struggling to position itself as the most preferred workplace in India. However, it is commendable to notice that despite the new e-commerce policy, the company has clinched the second spot in the list.

Amazon has been hiring rigorously in the country with the recent jobs postings calling for engineers, operations, or support staff to join the team. With machine learning (ML) and Amazon Web Services (AWS) becoming the fastest growing skills in the country, job seekers with the tech background have been most inclined to join the organization.

The Diversity of Clans

This year’s top companies span many industries and sizes. From the likes of Oyo, Uber and Swiggy to established organizations like Tata Consultancy Services and Reliance Industries, diversified companies were listed by LinkedIn as the ‘likeable by employees’ for varied profiles. Notably, every company has its own USP which attracts the employees.

While Paytm’s parent company One97 Communications’ informal work culture makes it a likeable workplace, Ola and Swiggy’s ambitious funding and expansion plans have lifted them to preferred categories. Google’s parent company Alphabet has been hiring right from the campuses of IITs and IIMs, giving an interesting opportunity for students to explore the global work culture.

Surprisingly, financial bodies like YES Bank and ICICI Bank were also placed in the list at number 14 and 20, respectively. Adding more to the amazement are Consultancy companies, PwC India and KPMG India compete closely at 21st and 22nd ranks, respectively followed by US chipmaker Qualcomm at the 25th position. Needless to say, India is becoming a land of opportunities not just for startups but employees of every field.