With 7039 start-ups and 10 unicorns, Delhi-NCR has reached the highest number of start-ups than any other state
Next Article Add to Queue

For a long time, the assumption was that Bengaluru was housing the maximum number of start-ups in the Indian ecosystem. However, with 7000 start-ups and 10 unicorns located in Delhi and adjoining areas such as Gurugram and Noida, the region-Delhi NCR has surpassed Bengaluru as the hub of start-ups in India, according to a report by TIE and Zinnov released on Tuesday. 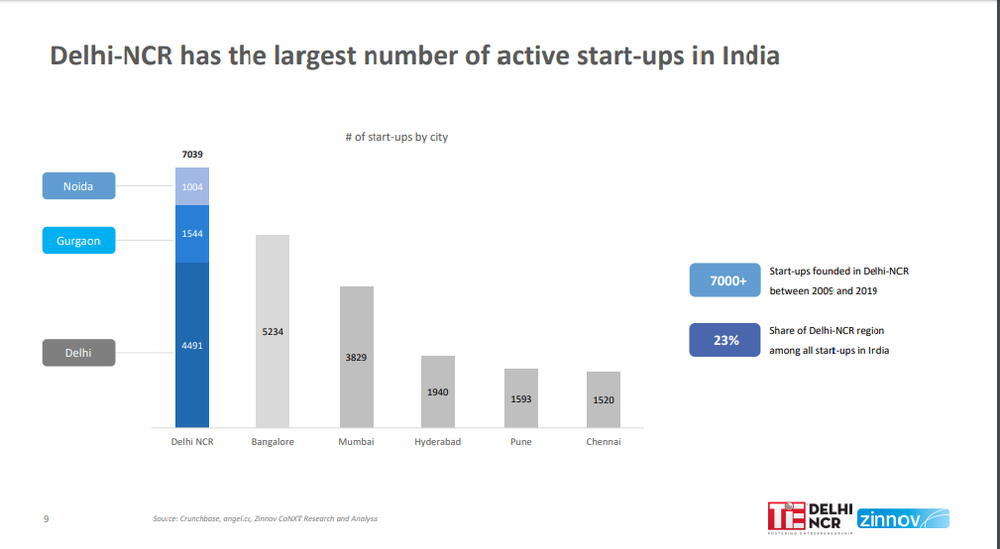 According to the report titled, 'Turbocharging Delhi-NCR Start-up Ecosystem', the companies taken into account for this report were founded in the time period between 2009 to 2019. Niti Aayog CEO, Amitabh Kant who released the report tweeted, "Delighted to release a fascinating report on the Start up ecosystem entitled 'Turbocharging The Delhi - NCR Start-Up Ecosystem' by TIE Delhi NCR. It reveals that Delhi - NCR has the largest no of active Start-Ups in India - 7039 as compared to 5234 in Bengaluru & 3829 in Mumbai."

The Delhi-NCR region comprises of 23 per cent of the total start-ups in the country, the report also added. Incidently, Bengaluru was considered the 'Silicon Valley' of India. With this report, the spotlight has now come on the national capital and the region surrounding it.

Former Google executive, Rajan Anandan shared at the launch, "What’s encouraging about the ecosystem in Delhi-NCR is that we actually have a very broad varied mix… As a region, NCR has created at least one unicorn every year since 2013… And unlike other regions, the 10 unicorns that we have, they’re not from one particular sector, they are from fin-tech, e-commerce, logistics, food, energy and so on."

Delhi-NCR houses myriad start-ups. From foodtech to fintech, there is no dearth of technology. For instance, foodtech company Zomato and logistics firm Rivigo (both unicorns) are headquartered in Gurugram whereas fintech start-up unicorn Paytm is headquartered in Noida. India has 26 unicorns out of which, according to the report, Delhi has 10, Bengaluru has 9, Mumbai and Pune have 2 and Chennai has one.

Hospitality start-up OYO which has become one of the fastest growing companies in India and Southeast Asia is also based in Gurugram.

The report finally evaluates and poses that Delhi has the potential to become one of the top 5 Global start-ups with more than 12000 start-ups and 30 unicorns in its kitty exceeding a valuation of a whopping US$150 billion.

This Start-up Is Making Screen Time More Productive For Children