By Shreya Ganguly October 24, 2019
Opinions expressed by Entrepreneur contributors are their own.
You're reading Entrepreneur India, an international franchise of Entrepreneur Media.

India’s ‘Make in India’ campaign has pushed the country to the 63rd rank in the Ease of Doing Business (EoDB) Index, according to the Doing Business 2020 report by World Bank released on Thursday. The Narendra Modi-led government is aiming to break into the top 50 of the EoDB index.

“The Make in India campaign focused on attracting foreign investment, boosting the private sector—manufacturing in particular—and enhancing the country’s overall competitiveness. The government turned to the Doing Business indicators to show investors India’s commitment to reform and to demonstrate tangible progress,” the report noted. 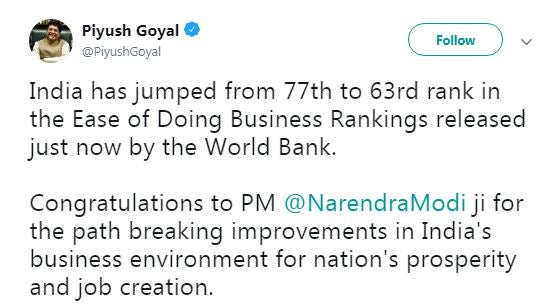 The EoDB Index ranks countries based on 10 parameters including starting a business, construction permits, getting electricity, getting credit, paying taxes, trading across borders, enforcing contracts and resolving insolvency. According to the report, the central government’s efforts on areas such as paying taxes, trading across borders and resolving insolvency has helped India make a leap from 130 rank in 2016 to 63 in 2020.

While addressing the media, Finance Minister Nirmala Sitharaman said that surveying only two cities, Delhi and Mumbai may not be adequate for deciding India’s position. “From this coming year, Kolkata and Bengaluru will be added to the list of cities surveyed,” said FM Sitharaman. She also specially highlighted India’s improvement in resolving insolvency where the country has jumped 56 ranks to reach 52 from 108.

Prime Minister Modi launched the Make in India initiative on September 25, 2014 with the aim to make the country a global manufacturing hub and facilitate job creation, foster innovation, enhance skill development and protect intellectual property, said a government website. “Led by the Department of Industrial Policy and Promotion, the initiative aims to raise the contribution of the manufacturing sector to 25% of the gross domestic product (GDP) by the year 2025 from its current 16%. Make in India has introduced multiple new initiatives, promoting foreign direct investment, implementing intellectual property rights and developing the manufacturing sector.”

With the launch of this initiative, several foreign and domestic brands have been focussing on manufacturing goods locally. According to recent media reports, the ministry of electronics and IT (MeitY) is planning to push the finance ministry to approve additional incentives to attract electronics manufacturers.

In order to achieve the goal of entering into the top 50 ranks in the index, government officials from Jawaharlal Nehru Port Trust (JNPT) and the ministry of housing and urban affairs reportedly met with World Bank representatives in May. According to media reports, the officials discussed 35 new norms including “easier process for filing Goods and Services Tax (GST) returns, increase in the rate of recovery under the Insolvency and Bankruptcy Code 2016, a colour-coded dashboard to track customs clearances in real time, a drive-through scanner to scan 100 containers per hour, and removal of incorporation fees for businesses with authorised capital of up to INR 15 lakhs”, for improving its ranks.

In a bid to make improvements from state levels, World Bank and DPIIT had jointly released a separate EoDB index at the state level in July 2018.

More About Ease Of Doing Businesss

Want To Start A New Business? India Might Be a Good Choice, Says Study

5 Things at Stake for Indian Entrepreneurs This Election Season