Everything You Need To Know About Israeli Spyware Attack Through WhatsApp

Amid the tussle between WhatsApp and Israel-based surveillance firm NSO Group, the Indian government has asked the Facebook-owned messaging platform to explain how the spyware Pegasus was used spy on Indian users by November 4. The Centre also asked the company to state their  plans to avoid such incidents, according to media reports. 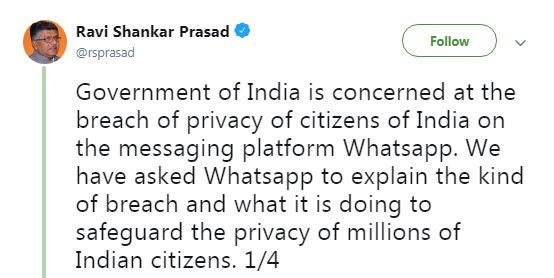 This development comes after it was reported that WhatsApp has filed a case against the NSO Group in the federal court, accusing them of allegedly violating both  Federal and California laws along with the company’s terms of services. According to the company, the firm was involved in the cyberattack on WhatsApp’s video calling service where the attackers had sent a spyware Pegasus to the cellphones of as many as 1,400 users.

According to media reports, through this attack, NSO helped the government spies get access to the phones of 1,400 users across four continents. The targets were mainly diplomats, political dissidents, journalists and senior government officials. This malware sent into the devices will allow NSO's clients to get access to the users mobile and their digital data.

Media reports revealed that Pegasus, allegedly created by the Israel-based company was used for surveillance during the run-up to the 2019 General Elections. It was also used to keep a tab over two dozen academics, lawyers, journalists and Dalit activists in India.

In a statement WhatsApp said that this attack was developed to access messages after they were decrypted on an infected device, abusing in-app vulnerabilities and the operating systems that power our mobile phones.

However, the NSO group has strongly denied the allegations. “In the strongest possible terms, we dispute today’s allegations and will vigorously fight them. The sole purpose of NSO is to provide technology to licensed government intelligence and law enforcement agencies to help them fight terrorism and serious crime. Our technology is not designed or licensed for use against human rights activists and journalists. It has helped to save thousands of lives over recent years,” NSO group said in a statement.

Related Story: Here is Everything You Need To Know About WhatsApp's Tussle With Israeli Surveillance Firm NSO

Several media reports revealed that Congress leader and heads the parliamentary committee on information technology (IT) Shashi Tharoor expressed concerns regarding the issue. He said that cybersecurity  is a major issue on their agenda and thus they will seek clarification from the government on this matter.

Apart from this, Randeep Singh Surjewala, who is in-charge of All India Congress Committee’s communications has also asked the government to say which agency had bought the software and what action will the government take.

How to talk to yourself on WhatsApp?

Will WhatsApp Steal My Data? The App Tries to Clarify its New Privacy Policies.