5 Trends Stoking the Growth of the India Start-up Ecosystem

The nation which already houses several unicorns saw seven additions this year, according to the 2019 edition of a report by NASSCOM and Zinnov

By Bhavya Kaushal November 7, 2019
Opinions expressed by Entrepreneur contributors are their own.
You're reading Entrepreneur India, an international franchise of Entrepreneur Media.

In less than two months, 2019 will be over. The year has been great for Indian start-ups and the entire ecosystem. Several start-ups got funding. The nation which already houses several unicorns saw seven additions this year, according to the report titled ‘Indian Tech Start-up Ecosystem-Leading Tech in the 20s’ by trade body National Association of Software and Services Companies (NASSCOM) and global management and strategy consulting firm Zinnov. The report highlighted several reasons why Indian start-up ecosystem is scaling great heights. 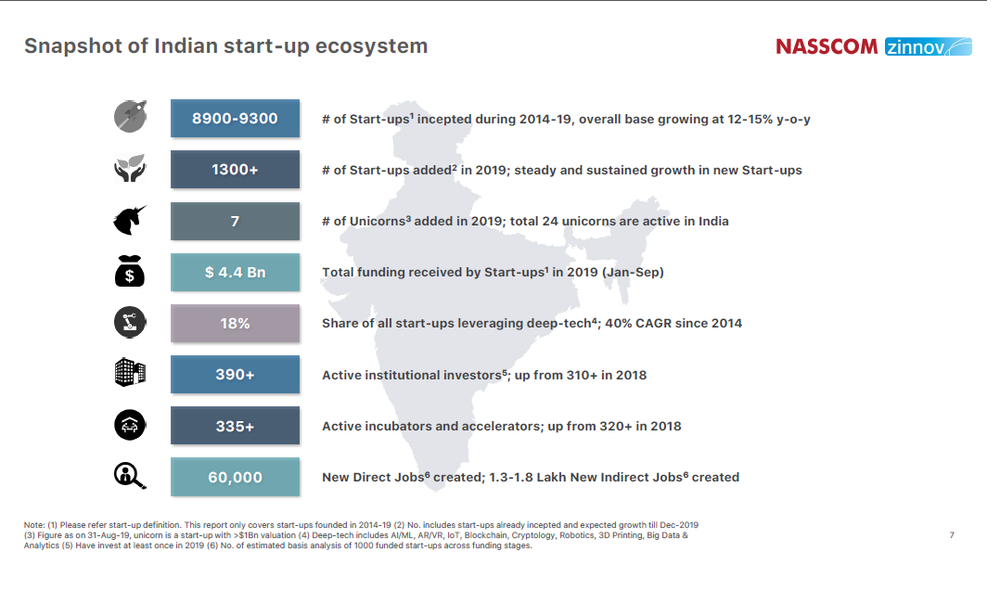 Start-up hubs are platforms wherein entrepreneurs are provided an enabling environment to grow and flourish. India has a lot of diversity. This diversity will undoubtedly trickle down to start-ups. It is certain that start-ups from all walks that are coming up, especially Tier II and Tier III cities, need the support of such hubs to flourish. According to the same report, the established hubs in India are Hyderabad, Pune and Chennai. Ahmedabad, Jaipur, Kochi and Kolkata have been named as the emerging hubs and finally, Thiruvananthampuram, Chandigarh, Coimbatore and Kanpur have been named as cities which are on the nascent stage of becoming start-up hubs.

One sector that has benefitted the most from digitization is finance and banking. In India, the majority of population was underbanked and underserved until UPIs, Aadhar and digital payments came. The fintech sector has grown exponentially and the potential that this sector has is also immense.

Moreover, investors have recognized the potential that this sector holds. According to the report, 10 per cent of the start-up entrepreneurs in India are leveraging opportunities across fintech.

With India aiming to become a paperless and digital economy, fintech seems the ideal path to achieve so because, as the report highlights, it cuts transaction costs, onboarding costs and also has helped in building trust, one factor that the sector has always criesd for.

The report highlights a very significant point when it comes to why deep tech must be diffused in the Indian business ecosystem. It says, “With increasing global competition, adoption of deep-tech is essential in many industries. The increasing adoption is also reflective of the improving technology skills in the Indian start-up ecosystem…”

India is a hub of talent in the field of technology. Internet of Things (IoT), artificial intelligence, blockchain etc are helping to solve core challenges in India’s healthcare, agriculture, real-estate landscape among many others.

According to the report, 2019 saw a steady rise in the number of institutional investors and also a change in the way how angel investors source and execute deals.

A trend observed in the investment graph is that as the amount goes up, the amount of investment goes down. Maximum investments happen in the bracket of $1 million-$10 million. Very few investors pump as much money as $100 million-$500 million. India is still dependent on foreign investors to pump big money although a lot of homegrown investors as well as private equity firms are emerging in the market. 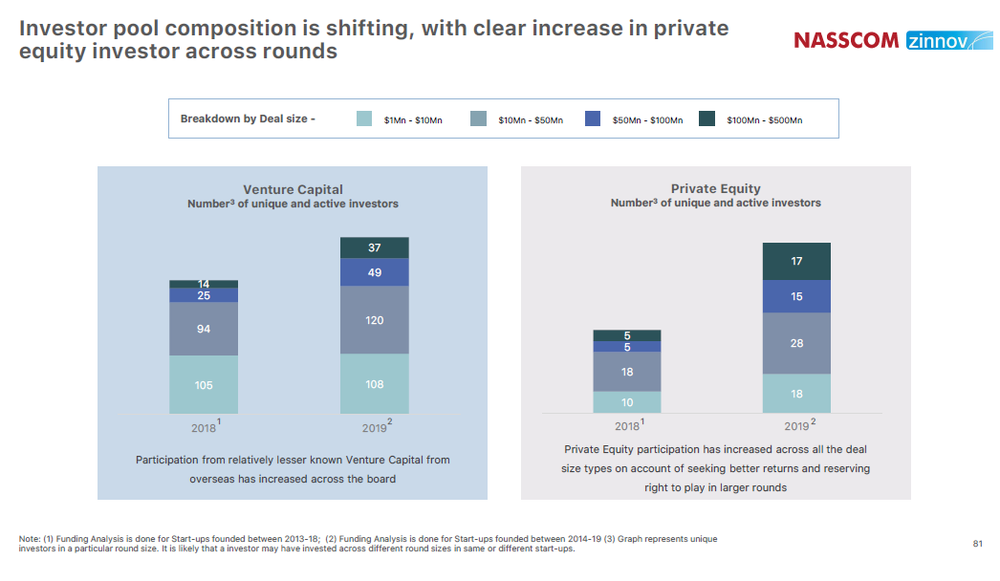 Unicorns, valuations, billion-dollar marks are exaggerated terms. And we have seen that in the example of WeWork and Uber of how when companies keep burning cash and don’t become profitable, they are spelling doom for themselves.

The report says, “Unlike 2018, this year investments were better distributed across different round sizes. This led to an increase in the number of start-ups with total funding greater than $50 million, creating a strong pipeline of potential unicorns.”

The report said that India has the largest pipeline of unicorns, ever and the unicorn club has expanded significantly this year.