Facebook Made Mistakes And Is Now Working To Gain Public Trust, Says Its India's Managing Director

While speaking at the Global Technology Summit, Facebook India's Managing Director and Vice President Ajit Mohan said that India is an important market for the company

By Shreya Ganguly December 6, 2019
Opinions expressed by Entrepreneur contributors are their own.
You're reading Entrepreneur India, an international franchise of Entrepreneur Media.

Social media companies have been working on shaky grounds in India after various incidences of data breach and spread of false information were reported. At a time when the Indian government is formulating new policies and strategies to keep a tab on the social media giants, Facebook India Managing Director and Vice President Ajit Mohan said that India is an important market for the company and its “appetite to invest in India is huge.”

While speaking at the Global Technology Summit organised by Carnegie India, Mohan said that Facebook made mistakes earlier but the Mark Zuckerberg-owned company is making genuine efforts to gain public trust. 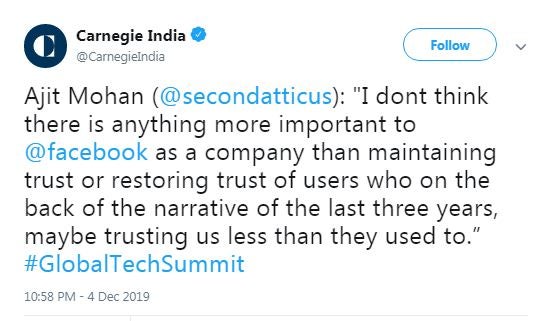 While speaking at the event, Mohan also said that India should align its rules with the global rules of data sharing and internet as that would benefit the country. According to Mohan, since several countries are coming up with their rules for internet companies, there should be alignment among them.

Mohan also said that with proper regulations in place, India can also facilitate the free movement of data

Apart from the data protection bill, the central government is now also amending its Information Technology (Intermediaries Guidelines) Rules, 2011, now social media companies will be mandated to trace the originator of fake news. Apart from this, Sanjay Dhotre, minister of state for IT,  had also informed the Rajya Sabha that social media companies will be required to take down malicious content within 24 hours of receiving a court order, or notification from the government, as a part of the amendments. The proposed amendments will also mandate the companies to inform their users about the compliance of rules, following users’ agreement and privacy policy.

Mohan believes that the next stage of growth and innovation will benefit from the upcoming rules. He also said that Facebook is not the same company as it was two years ago and their want to change is genuine.

After being criticized globally for Cambridge Analytica fiasco, Facebook has been working to gain user trust. The company has also ramped up its efforts to gain its trust back in India.  Most recently, Facebook announced a slew of India-focused initiatives including the content partnership with the Ministry of Women and Child Development (MWCD), the formation of an Ideal Internet Consortium to oversee online safety of children and launch of We Think Digital to accelerate digital literacy efforts in the country.

It also launched We Think Digital, a global digital literacy program under which it will partner with agencies from both government and civil society. This program will use learning modules designed to impart skills among people, including the ability to think critically about what they see online, how to communicate respectfully and engage in digital discourse.

Apart from this, Facebook India also announced its partnership with venture capital firm SAIF Partners which counts companies such as MakeMyTrip, BookMyShow, Justdial.com, and Paytm in its portfolio, to support early-stage small and medium businesses (SMB). This partnership comes as a part of Facebook’s VC Brand Incubator Program.