By Shreya Ganguly December 9, 2019
Opinions expressed by Entrepreneur contributors are their own.
You're reading Entrepreneur India, an international franchise of Entrepreneur Media.

The cryptocurrency market in India has been on shaky grounds  due to unfavourable rules and Reserve Bank of India’s plan on banning cryptocurrencies. While speaking at the 5th bi-monthly monetary policy conference, RBI reiterated its stance on banning privately-owned cryptocurrency in India.

According to RBI governor Shaktikanta Das, issuing currency is a sovereign mandate and this should not be given to private companies. He also explained that amid challenges related to money-laundering, a private currency cannot override sovereign currency.

India To Have Own Digital Currency?

While speaking at the conference, Das also revealed that RBI held internal discussions with Central banks and is considering the possibility of coming out with India’s own digital currency. However, Das said that the technology is at a nascent stage and the digital currency will be launched when the time is appropriate.

Though further details about RBI’s own digital currency is not known, the central bank is maintaining its stance of banning private cryptocurrencies. Talking about the issue, Nischal Shetty, founder and CEO of WazirX, cryptocurrency exchange, said, “In case the Indian government decides to go ahead and ban cryptocurrency, it would result in a brain drain and a decline in innovation and job losses.”

Shetty also said that the ban might force entrepreneurs and startups in this space to move to crypto-friendly countries like Japan. This can cause a huge loss of tax revenue for our country. The ban might also deter foreign venture capitalists from investing in India.

“The RBI banking ban is a very arbitrary move, and it’s being challenged in the Supreme Court. I’m optimistic that the courts will hear us out, and rule in our favour,” Shetty told Entrepreneur India.

What Is The Issue?

The issue came under light after RBI issued a notification to all banks and RBI-regulated financial institutions last year stating that it would not deal with any entities or consumers dealing with cryptocurrency. It gave three months to all the banks to settle their services with cryptocurrency businesses.

Following this, all startups and industry players have been requesting the government to understand and consider the benefits of the new-age technology. 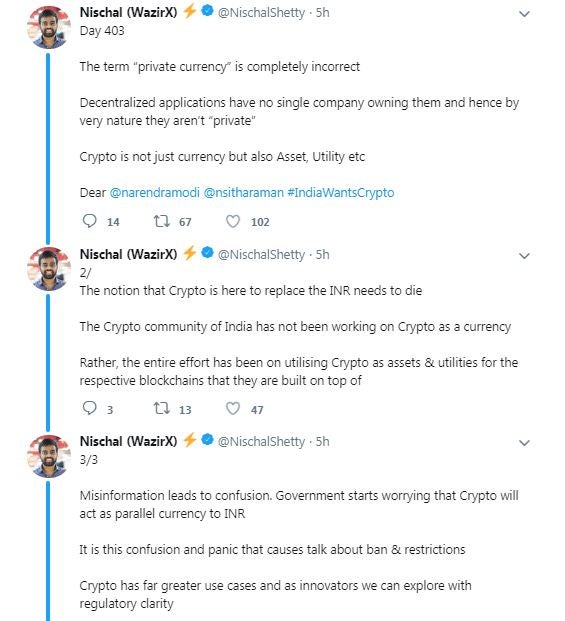 India’s stand to ban cryptocurrency comes at a time when internet giants such as Facebook announced its plans to launch alternative currency, Libra. However, reports reveal that Libra will not be launched in India as current regulations don’t allow the use of banking networks for blockchain-based currency transactions.

Earlier this year, speculations were rife that the draft “Banning of Cryptocurrency and Regulation of Official Digital Currency Bill, 2019” may propose a jail term of one to 10 years for anybody who mine, hold, transact or deal with cryptocurrencies in any form, whether directly or indirectly through an exchange or trading.

Ethereum Is On The Verge Of Another New All-Time High