By Pamella de Leon December 12, 2019
Opinions expressed by Entrepreneur contributors are their own.
You're reading Entrepreneur Middle East, an international franchise of Entrepreneur Media.

Driven by art and social impact, 81 Designs brings together Middle East artists with Palestinian women refugees living in Lebanon to empower them to have a sustainable livelihood by making use of their artisanal talents. Launched in 2015, the venture was started by mother-daughter team Nesrine El Tibi Maalouf -whose background stems in advertising- and Nadine Y. Maalouf, who previously worked with art education institutions and retail groups. The brand primarily focuses on utilizing the art of tatreez, a traditional Palestinian embroidery craft, which remains the primary embellishment in women’s clothing, as well as a reflection of a woman’s social status in Palestine.

“A part of the daily routine in old villages [was that] women used to work collectively on an embroidery project, until it has become a traditional craft passed from generation to generation,” explains Nesrine, who is half Palestinian herself. “During the political unrest, tatreez became a coded language used to express opinions and share stories- a symbol of resistance, identity, and heritage.” 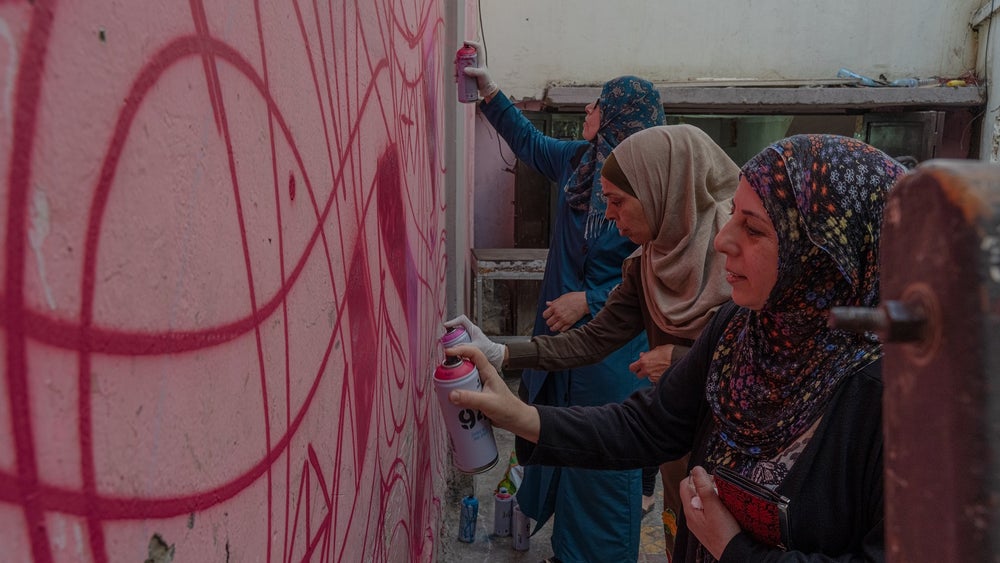 Refugee artisans employed by 81 Designs painting a mural
Source: 81 Designs
The enterprise took two years to establish, notes Nesrine. Initially launched in 2015, 81 Designs now oversees a group of refugee women as they preserve and modernize the craftsmanship of tatreez to recreate the works of leading Middle East artists in their traditional style of cross-stitching. In March 2017, 81 Designs kicked off a project at Art Dubai, in collaboration with international French- Tunisian artist eL Seed, with the former recreating eight of his artworks and presenting them during a talk between Nadine and eL Seed.

Collaborations like these have allowed the social enterprise to thrive- in March 2018, following the successful launch project, the enterprise has managed to employ four more female artisans, making a difference to the lives of a total of 14 refugee women. At Art Dubai, 81 Designs also presented its recreation of some works from the Graffix from the Souk collection by contemporary artist Hassan Hajjaj, perhaps better known in the art world as the Andy Warhol of Marrakech. 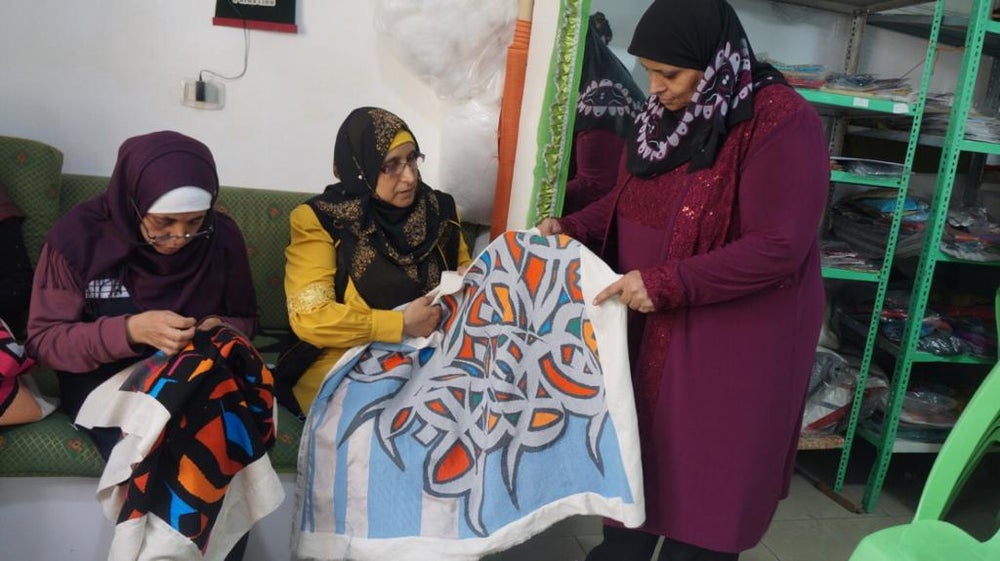 This was followed by the addition of six more refugee artisans into the enterprise, which signaled the debut of the company’s third project in November 2018 at Abu Dhabi Art in collaboration with Bokja, a Lebanese-based surface fabrication studio. The project was titled Standing Tall, and featured five sculptures of women with 100 embroidered fragments, designed to pay tribute to the UAE’s founding father, the late H.H. Sheikh Zayed bin Sultan Al Nahyan. The fragments, Nesrine notes, were to mark the 100 years of his passing, and also were a reflection of his poetry.

The enterprise was also asked by Facebook to launch their participation at Dubai Design Week in November 2018 through an entire week of workshop activations, which focused on the history of tatreez and 81 Designs’ goal of both modernizing and preserving the traditional craft. And recently, in November of this year, the enterprise presented a new project called The Journey at Abu Dhabi Art. In collaboration with eL Seed, the artist painted seven murals inside Ain al-Hilweh, one of the largest and most crowded Palestinian refugee camps in Lebanon, along with the refugee women that 81 Designs employ, and their children.

Related: Fighting The Status Quo: Lina Khalifeh Sets Out To End Violence Against Women With Her SheFighter Academy 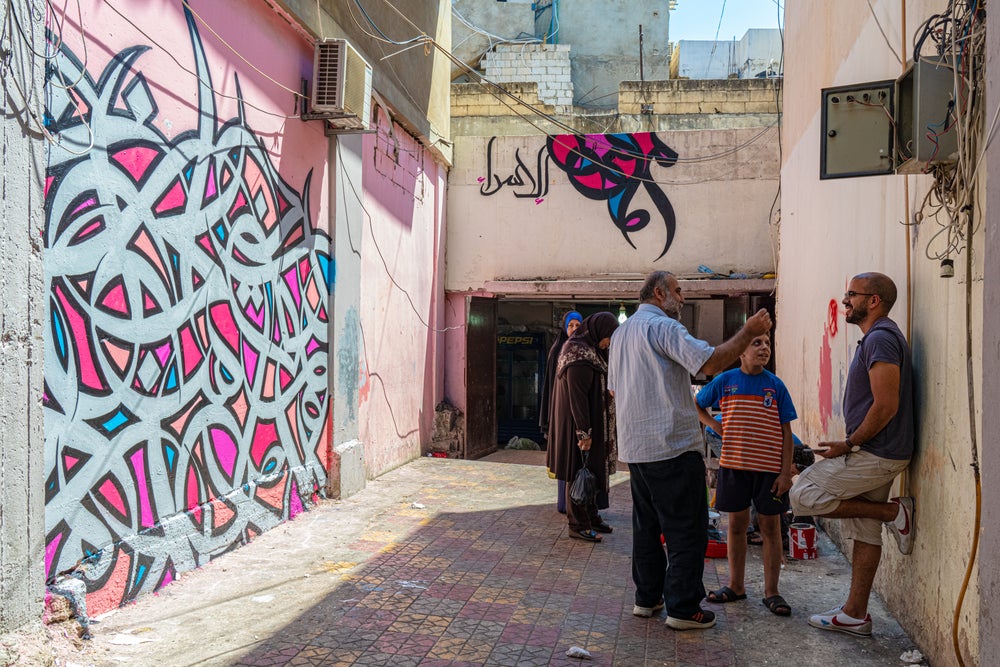 81 Designs x eL Seed's murals inside Ain Al Hilweh
Source: 81 Designs
With over 35 refugee women participating in the project, each mural (inspired by a poem by Palestinian poet Mahmoud Darwish) translated into an artwork created in the medium of tatreez on canvas, which was handstitched by the artisans. The enterprise also released a behind-the-scenes look of the project with the book The Journey, which showcased a powerful photo series highlighting the living conditions of a displaced community, and an in-depth perspective on the lives of refugees. It was released at this year’s Abu Dhabi Art festival in late November, along with the framed tapestries and figurines made in tatreez.

Besides empowering women artisans through design and art, 81 Designs also offers capacity building through skills and confidence workshops in south Lebanon. Their head artisan, Um Mahmoud, also conducts regular trainings to build the refugee artisans’ confidence and continuously develop their technical skills. Using their own personal funds as seed capital, the company’s founding duo says they generate revenue through successful sales of their projects. “We currently do not have any other private investors or VCs involved in the social enterprise,” Nadine says. 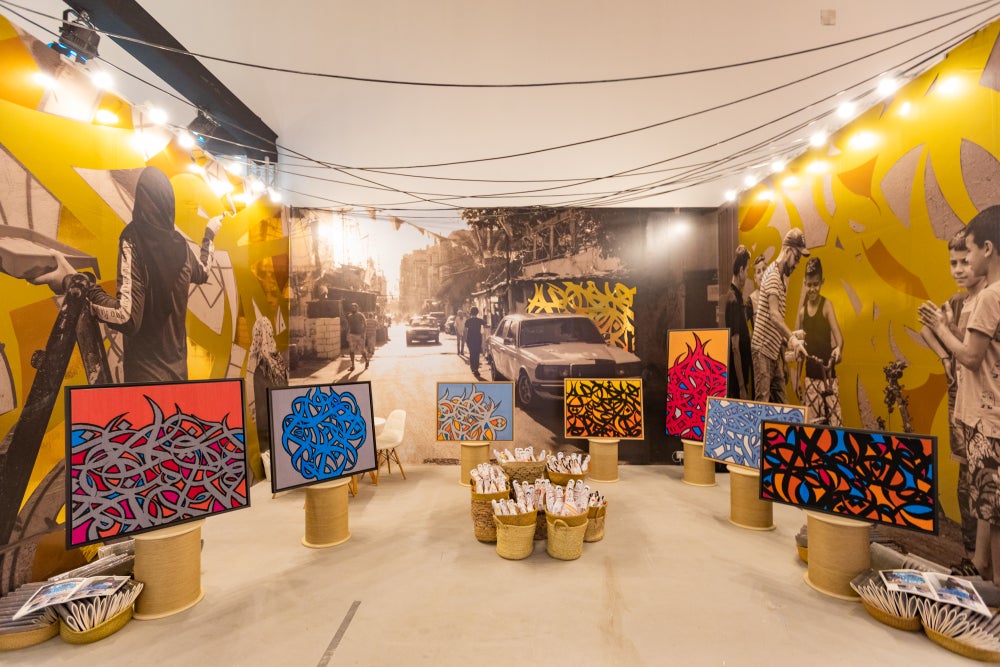 81 Designs booth at Abu Dhabi Art featuring The Journey
Source: 81 Designs
Describing themselves as an enterprise with a social cause that is driven by commercial strategies, Nadine says that 81 Designs uses the employment model of a social enterprise. “We employ Palestinian refugee women living in Ain al-Hilweh refugee camp in Lebanon, and provide them with sustainable incomes. We do not restrict the refugees to work with us exclusively to not limit their income that will help support their families.”

As a venture aspiring toward making real social impact, the mother and daughter also make it a point to ensure that the people and entities with whom they collaborate share similar values as 81 Designs. “They also share the same compassion and drive we have towards reaching our goals,” Nadine notes.

As entrepreneurs, every decision count, and they can essentially make or break your venture. When it comes to making difficult decisions, Nesrine says transparency is a key factor in how they go about the process. As a mother-daughter duo, Nesrine claims that they have an open and honest relationship. “We were both transparent from the beginning on where we see our involvement within the social enterprise we created,” says Nesrine, noting how they’ve given themselves clear roles- Nadine is the Art Director, while Nesrine handles partnerships.

As for what’s next for the enterprise, the duo states, “Eventually, we hope to provide an educational scholarship for refugee children.” And finally, when asked for advice they’d give other entrepreneurs, Nesrine replies: “Stay curious and believe in yourself, your intuition, and your vision. Most importantly, know that it is okay to explore unique ideas.”

Related: Innovation For Impact: MENA Startups Are Taking On The Refugee Crisis