Learn Classical Music To Preserve It, Not Just For the Stage: Amjad Ali Khan

Ahead of performing in New York as part of HCL Concerts, the Sarod maestro spoke to Entrepreneur India about changing traditions in the Indian classical music industry

Music is an art form that arguably leaps past most others. There’d probably be a select few in millions who wouldn’t like the sound of good music. And the ratio probably remains the same when it comes to those who can produce music that manages to engulf generations. Sarod maestro Amjad Ali Khan has and continues to enthral and entice people across age and geographies.

But at a time when showcasing work using new-age tech tools and getting noticed has become much easier for aspiring artists, the maestro has a few words of caution to offer. “Young artists today are too keen to perform, and this is dangerous. Reality shows are good, but what happens to the winners? Where do they go?”

The Grammy award nominee believes very few today are willing to spend time to understand the nuances of an art form. “Everyone is too eager to perform on the stage. There are many untrained artists performing, and that is a disservice to the art,” he said.

He spoke to Entrepreneur India a day before he—along with his sons Amaan Ali Bangash and Ayaan Ali Bangash—was slated to perform at Carnegie Hall as part of HCL Concerts in New York earlier this month. 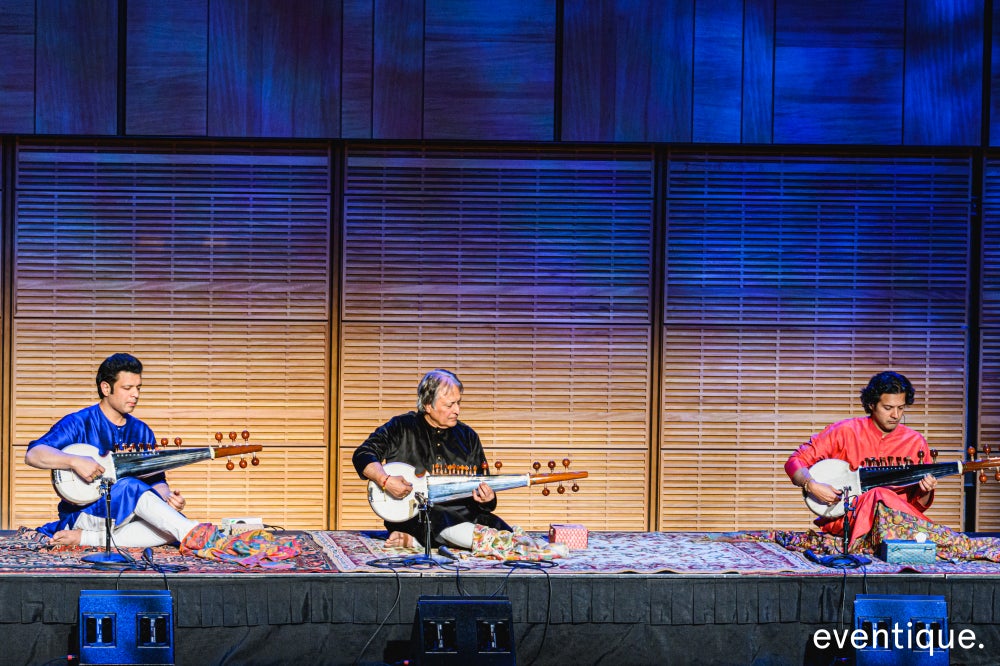 Amjad Ali Khan performing with his sons Amaan and Ayaan

While HCL Concerts organises events to popularise and preserve Indian classical music in several cities including Delhi-NCR, Lucknow and Chennai, it organized the first overseas event in 2018 when renowned artists L. Subramaniam and Kavita Krishnamurthy Subramaniam performed in New York.

According to Arthur Filip, executive vice-president of sales transformation and marketing at HCL Technologies, HCL Concerts is looking to organize such events to promote Indian classical music at more overseas destinations, and London could be the next city.

Apart from physical concerts, HCL Concerts also organises digital concerts in order to nurture new talent and preserve the legacy of Indian classical music. In 2018, on World Music Day, HCL Music app was launched which aimed to be the largest ever repository of classical content. Available on both Google Play Store and the Apple App Store, the app streams ad-free uninterrupted music, and requires no subscription fee.

According to Khan, while Indian classical music is still admired by many, the way of learning has changed and so has the relationship between a teacher and a disciple. “Earlier, we had to surrender ourselves to the guru (teacher) and the art, and not think about tomorrow,” he said, adding that there used to be guru-shishya parampara (teacher-disciple tradition). “Earlier, a knowledgeable man was considered an institution. Now a building is considered an institution. The systems have changed.”

His advice to budding youngsters is that they should learn music to understand it first and learn how to preserve it.

According to the maestro’s elder son Amaan, youngsters who aspire to make it big in the industry should complete their basic education, have faith in God and keep practicing. “There is a chance that he might get frustrated but with educational degrees, at least he will be able to do a job,” he said.

“One has to go with blinkers on and have to focus. If one starts thinking about backup plans, the main plan becomes the back up. One has to just dive into it and stay honest to the teacher,” said Amaan.

Beyond Nepotism & On Plagiarism

The younger son, Ayaan, believes not every moment is hunky-dory. “A lot of organisers do not call us purposely as they think we got everything on the platter,” he said, referring to the many struggles faced by musicians.

“Don’t just be the best, be the most loved,” said Amaan, as his parents taught him. “Once people love you for what you do, it will be all fine.”

Despite coming from an illustrious family, Amaan said they work hard. “Everyone will have to work hard. I mean, my father’s name can bring me on the stage once, twice, thrice, or maybe 10 times. But the 11th time, when you (are) paid for a concert, audience has to accept you. The organizer is not doing you a favour.”

According to Khan, while classical music is still doing quite well, sarod has become more expressive over the years and the canvas has expanded. “Certain things were not attempted earlier as people thought it was not possible with sarod,” said Khan.

However, plagiarism is a problem. “One can be a disciple of any musician, but if you are using someone’s technique or style of music, it should be acknowledged. Unfortunately, that is not happening. With YouTube close-ups available, people learn the techniques from famous classical players and not acknowledge them. That is stealing. I think that with online fame available easily, musicians have become delusional. Instagram and Facebook makes one believe what is not true,” said Amaan.

“One thing is to be inspired. When you see inspiration without acknowledgement, it is plagiarism,” said Ayaan, adding that if a musician is using a technique of another musician, than one should have the courage and grace to say it to the world.

The Maestro first visited the US in 1963 with a bunch of other artists. Over the years, he has seen a change in the audience as the generation has changed, but according to him, the culture has remained constant.

“In the western world, music is encouraged right from the childhood. In India, parents are more focused towards making their children doctors or engineers. So here we get standing ovation not only at the end of the performance but even at the start when you come up on the stage,” he said.

However, according to the musicians, today the audience is more positive for all genres of music, even in India.

The eldest Khan also believes that musicians should give more importance to compositions rather than playing the same raag for hours. “Compositions were created to preserve a raag, but instrumental musicians forget this. There have been times when even I have played whole night long, but I believe music is about the quality and not quantity. The sense of proportion is important,” said Khan.

With the audience also changing and so many first-timers around, musicians too need to stay ahead, he said.