With four production facilities across Mysore, Kovur (Andhra Pradesh), Nagpur and Indore, Bira 91 aims to expand its revenue almost 10 times from where it is today

My first meeting with Ankur Jain was in 2017, almost two-and-a-half years back when Bira 91 started gaining momentum. Operating out of the same location but in a far fancier office and a much bigger space, I sit down with Jain to discuss his audacity as an entrepreneur. Brand building and distribution, according to Jain, are the two key factors in making Bira 91 a great success in a market which has been led by behemoths. As we meet Jain on a chilly winter morning and discuss issues like seasonality that a beer entrepreneur would face, Jain pours the recently launched Stout, which has a heavier taste and tends to sell more during winters. The office not only has the Bira 91 tap but a sales ticker running across the office, which shows how much the brand has done the previous week and how much more remains to be achieved in terms of sales, keeping the company thirsty for more.

After completing his Bachelor’s from Illinois Institute of Technology in 2002, Jain continued to pursue his entrepreneurial journey for four years. Fortunate enough to find a buyer later, he came back to India as the healthcare start-up found a new owner. He took up a job at Reliance Industries in 2007, but left after a year to venture out on his own in 2008. B9 Beverages didn’t exist in its current form then; Jain began a beer distribution company. He started importing 20-30 types of beer, which didn’t exist in India. His tryst with import made him aware of the preferences of the younger generation towards lighter flavours and wheat beer. It also helped him figure out the correct price point Indian consumers were happy to shell. During this time, he found a huge vacuum in the market and decided to be the new entrant and compete with the already established big daddies of beer.

THE SEQUOIA STORY
During this hustle, Jain met Abhay Pandey, Managing Director at Sequoia Capital, in 2011 but the distribution and import business at that time didn’t excite Seqouia enough to invest. Two years later, the two met again in a Starbucks cafe and pitched the new business: he was going to launch Bira91, a craft beer ‘Imagined in India’. After bootstrapping the import business, he finally raised his first round of seed capital followed by institutional funding in 2015 from Sequoia Capital. During the journey, Bira 91 also saw Super Angels like Deepinder Goyal of Zomato and Kunal Bahl of Snapdeal investing in the venture. Soon, they tied up with players like The Beer Café and Zomato to improve penetration across markets. The first two variants launched by Bira were Blonde and White. The company worked on its packaging, making it fun and distinct to attract the millennial. They further innovated in 2017 and launched the Lite and Strong variants. Jain says, “We have been growing almost 200 per cent in the last five years.” Sharing the ethos of the brand, he adds, “As consumers are picking beer more for taste than ever before, our belief is that for this generation of consumers Bira means beer. We feel over the next 10 years, there is going to be continued growth. Ups and downs are natural. But for this sector, the next 10 years look phenomenal.” 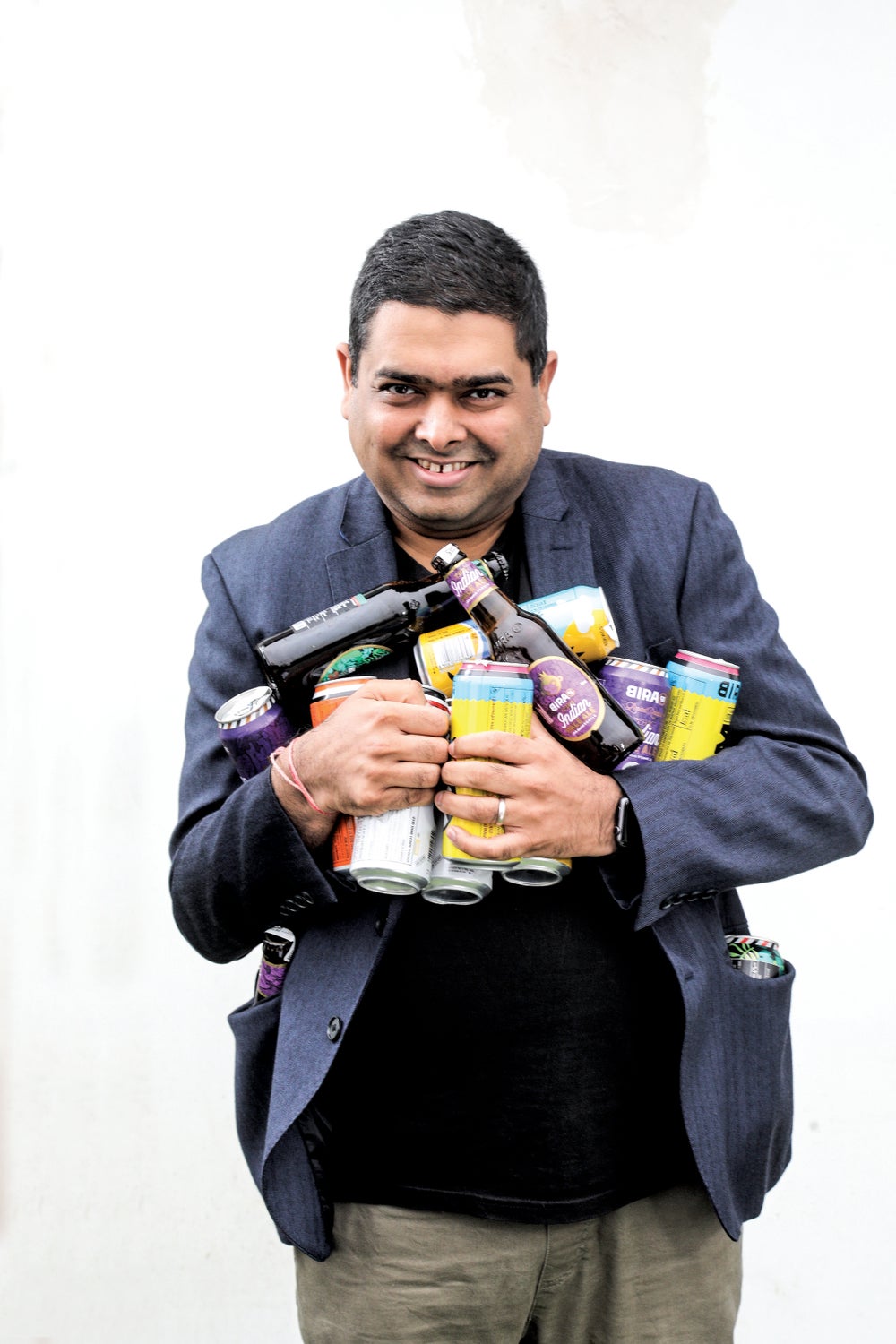 DEEP IN TO THE SPIRIT
Innovating newer variants now has become far more systematic at Bira but getting the first one right wasn’t easy. Jain, the alchemist, made pilgrimages to places in Belgium to get his craft right. Initially, while importing beers Jain developed the first batch of beer with partners in Belgium. It also meant Jain being the guinea pig of various iterations while throwing and gulping a lot of beer himself. He says, “We wanted to make it in the style of a Belgian wheat beer but we didn’t want to replicate it either. So we researched on what Indian consumers wanted and thought of making it slightly more sour whilst rendering a juicy taste to make it more appealing for an Indian consumer.” Internal code name for the White was fresh and juicy.

Jain says, “We launched a new product in 2019 called BOOM in March and we crossed a million cases of sales within six months.” He shares it hasn’t been easy to set the kind of team he always wanted. For him, it’s a combination of seasoned professionals and younger team which calls the shots. With offices across Delhi, Bombay, Bengaluru and Goa, the team size has increased to 550. The next challenge for Bira is to keep it fresh while brewing it in bigger quantities. Jain shares, “It’s incredibly tough to make beers at large scale consistently. There is a lot of science and supply chain planning involved. You have to factor in a lot of external factors. It’s something large beer companies are chasing to achieve.” Bira 91 hired a full team in 2018 which specializes in areas of freshness. 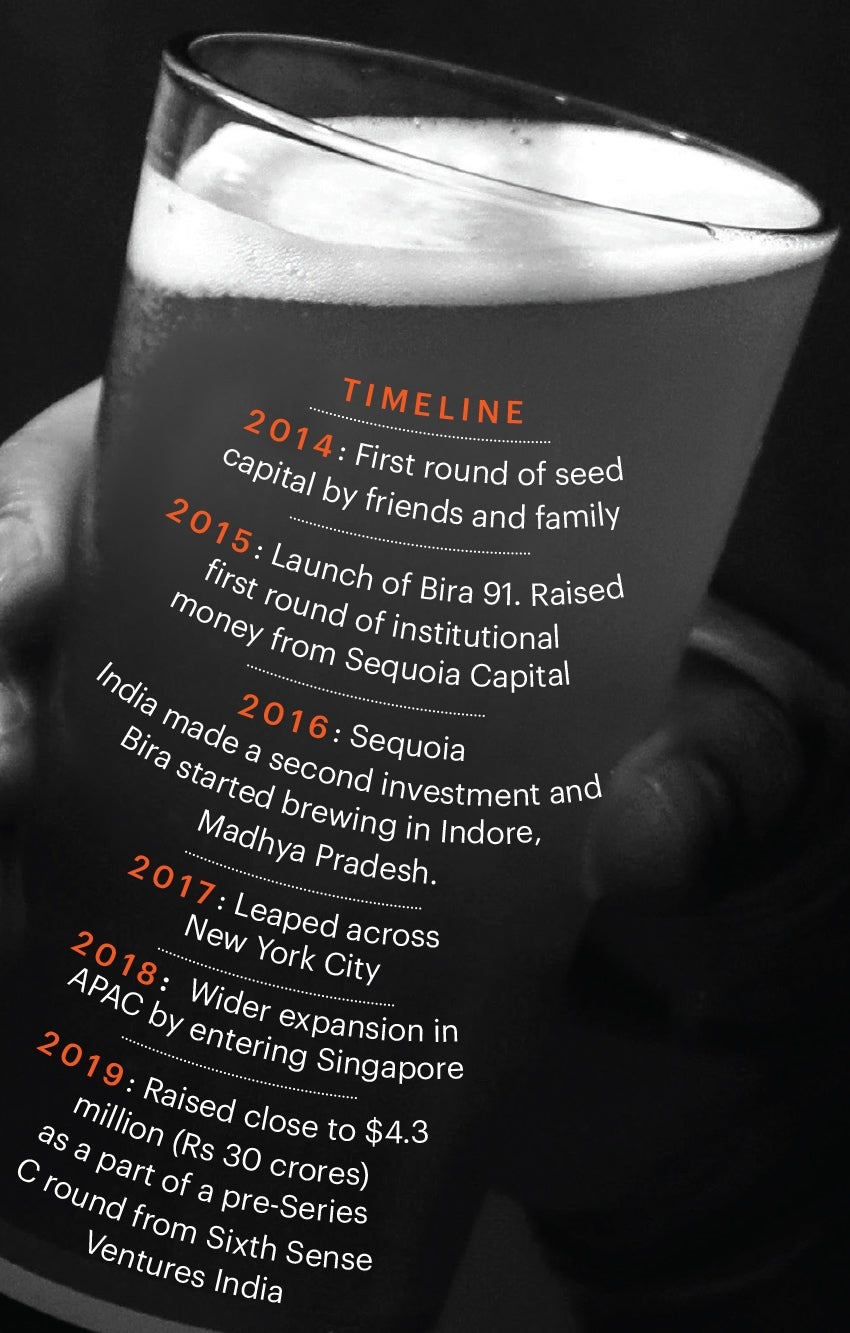 BREWING IT STRONG
Bira 91 now has four active breweries with a production capacity of 400,000 cases per month. The company closed 2019 at $100 million in revenue. With a market share close to two-and-a-half per cent of the overall beer market and 10 per cent of the premium segment, Bira 91 is all set to stay nimble and agile. Distribution is key to how consumers discover the brand because the way they find your beer is a big part of the opinion they form. Bira 91 seems to have nailed it. On distribution of the brand, Jain says, “We progressively started expanding into retail shops. Now we are building presence across channels where beer is sold as we aspire to be available in all those formats. We sell at airports. We are talking to a few partners for in-flight services too.” Starting 2019 with 30 odd cities, the team further scaled it up to 225 cities. Last year saw Bira 91 growing at 100% y-o-y and doubling up the volumes. While the slowdown as seen negative or flat growth for others, Bira 91 has been able to increase revenues by grabbing market share of other players. Bira 91 has been one of those players which has expanded not just in India but also globally. Talking about international expansion, Jain says, “With presence in nine countries now, we expect to be in 16 by the end of this fiscal year.” Bira is currently being exported to the US, the UK, Australia, Singapore and Hong Kong. With increasing popularity of Indian food internationally, people are willing to pair it with an Indian beer. In 2018, Bira 91 signed the most coveted ICC deal where it saw massive marketing with the first tournament last summer. Since the freshest beer comes from the taps at your local brewery, Bira is now exploring to venture into Bira 91 taps coming in Bengaluru this year to help them innovate and brew fresh small batches.

Sharing his path to profitability, Jain says, “We are profitable in terms of unit economics. Our gross margin is two times that of the industry. At the corporate level, we will be profitable by FY2022. Already being the most funded FMCG start-ups in the country, Bira will be raising its Series C round of funding this year in May. Talking about the role played by investors, Jain says, “Investors have been tremendously helpful in challenging times in the last 3-4 years. They helped us build the team, have corporate governance and structures around.” As a brand once it found the right connect with its audience, Bira 91 started selling merchandise across its website making sure the consumers remember the brand even after the drink. Though Bira’s Merchandise business is fairly small right now, Jain aspires to make it 3-4 per cent of its contribution to overall business. With four production facilities across Mysore, Kovur (Andhra Pradesh), Nagpur and Indore, Bira 91 aims to expand its revenue almost 10 times from where it is today. In terms of states, Karnataka generates the highest revenue while Delhi continues to top the chart across cities.

Bira 91’s journey wouldn’t be complete without the mention of Ankeeta Pawa, the founder’s wife. Besides being a part of the marketing team, she also helps Jain in getting a perspective from the employee’s side. Jain adds, “When you are leading an organization, you have blinders on. The goal is the most important aspect. You don’t feel the discomfort an employee may be facing in achieving those goals. She is able to connect with them at a different level.”

As Ankur’s thirst continues to grow, he says, “We are very self critical as an organization and I like that. We are always trying to find better ways of doing things that we do. Every day, I feel what really sort of gives me a kick is the feeling: can we do better 2X or 3X? Our aim is to become the beer of choice for this generation.” Commenting on various new players entering the market, Jain is quick to mention, “This is a long game where not the months, but the years matter.” The highest funded FMCG start-up Bira 91 continues to find its cult by building brand memorability, physical availability and range. For this start-up, there is no consumption slowdown. Jain doesn’t operate like a typical liquor maker; he operates like a beverages business operator. So adding a flavour like coffee to stout wasn’t something only he would have thought of. Only a beverage start-up could think on those lines. If you like to pair your beer with food, pull a chair and drink in the tale of Bira. All we can conclude is the craft beer craze is not fizzing out any soon. So keep brewing it fresh! 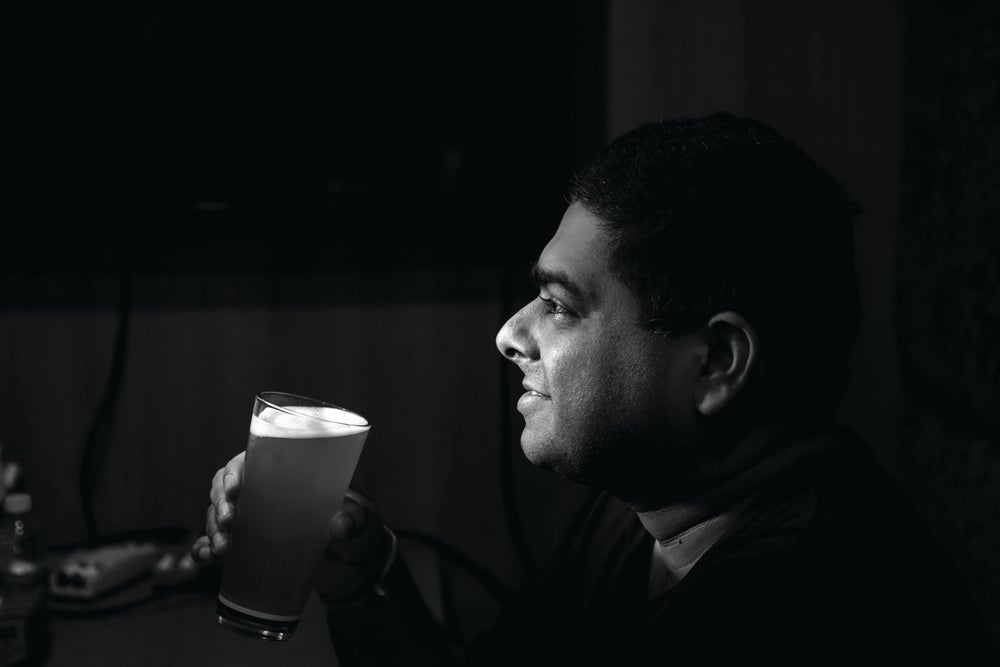 MANAGING INVESTORS: In a start-up pitch, it’s all related to challenges you are trying to solve as a company. In early stage you are predicting that this product will be liked by the consumer. There will be a product market fit. That’s when you raise capital. Today, the challenge is: will we be able to scale it up from where it is today to say 3X in next 3-4 years? That’s a very different problem to solve. Conversation with investors will typically be around what are the challenges that are expected to come in between - from where you are and where you want to be in the next three years. We have open conversation with investors in good and bad times. Pressure only comes when there is a big misalignment. And they happen if you are not talking to investors and vice versa.

TO ACHIEVE BEST RESULTS, PUT ON BLINDERS: I am one of those founders who have been not glued on the start-up ecosystem. I am far away from tech and I have blinders on. I am focused on one thing only which is Bira91. I am a traditional entrepreneur. I have no clue who is investing where.

HAVE FOUNDER FRIENDS: I have founder friends and just talk about business things. I would refer to a bunch of them like Kunal Bahl, Rohit Bansal, Prashant Tandon.

BE CONSUMER-CENTRIC: Treat the consumer as you would treat a close friend.

GROWTH INNOVATION: Product innovation does not mean much for a brand if it cannot scale.

A Day in the Life of Ankur Jain

Wake up at 5 am
Yoga from 6:30–7:30 am
Reach office by 9 am. Meeting is sacrosanct at 9:30 am. Packed day. Hardly been seen on his seat, caught up with meetings, partner calls or travelling. Leaves office around 8 pm.
Jain enjoys cooking over the weekend and loves to cook for his parents and wife.

Meat Without Guilt: The New Mantra For Millennials?