The diamond business, like so many others around it, is seeing the winds of change come upon it as well.

The diamond trade may not be what immediately comes to mind when we talk about industries that are currently being disrupted in the world today, but a chat with ALTR Created Diamonds founder and CEO Amish Shah makes me realize that this business, like so many others around it, is seeing the winds of change come upon it as well. There was once a time when diamonds could be sourced only from the earth, but today, science and innovation has made it possible for them to be created within a lab as well.

The advent of these lab-grown diamonds -which are also called created diamonds- have caused quite a stir within the jewelry industry, with detractors quick to point out how they just don’t match the value, rarity, or appeal of their earth-mined counterparts. But Shah -who’s part of a family that’s been in the jewelry business for 85 years- believes that created diamonds are the future of this industry, and those who fail to get onboard this wave of disruption in it today only stand to lose in the long run.

As for what drives his conviction in this regard, Shah, who has been working with created diamonds since 2006, points toward growing customer interest as validation for what he preaches- according to him, there is a demand for an alternative to earth-mined diamonds, he says, and ALTR is simply responding to that.

Since its launch in New York City in 2016, ALTR (a division of the R. A. Riam Group, of which Shah is a founding member as well) has seen its business grow around the world, with Shah saying that the company’s main task over the years has been in educating customers about the options they have in front of them when it comes to purchasing diamonds. “ALTR was born with a very clear perspective that we are going to tell the consumer that there is a choice for you,” Shah explains. “And then you make that decision.”

Now, there’s plenty of material on the internet that delves into the difference between earth-mined diamonds and created diamonds, and deciphering differences in terms of value (a man-made construct by itself, by the way) between the two seems to be a largely subjective affair. At the same time, it’s worth noting that the US Federal Trade Commission declared in 2018 that it won’t be defining diamonds as “natural” diamonds any more, because, as per its ruling, “it is no longer accurate to define diamonds as ‘natural,’ when it is now possible to create products that have essentially the same optical, physical, and chemical properties as mined diamonds.”

As for Shah, his answer to the question in terms of differences between the two kinds of diamonds is decidedly simplistic, but, at the same time, fairly straightforward as well. “A diamond is a diamond is a diamond,” Shah says. “The simplest difference, if I was telling a consumer, might be that one is from below the ground (which are the earth-mined diamonds), and one is above the ground.”

According to Shah, ALTR has been contracted to about 800 stores today, and as its roll-out continues across the globe, its offerings have been seeing increased consumer traction as well. “Just like any disruption, you know, you bring the product to the market, and you ask the consumer a question: ‘What do you think?’” Shah says.

“What happens after that is the response of the consumer. Revenue is always a result, not the cause of growth. I think the traditional businesses see revenue as success. Success is not revenue. Success is consumer adoption. And today, we are available from New Zealand to North America. 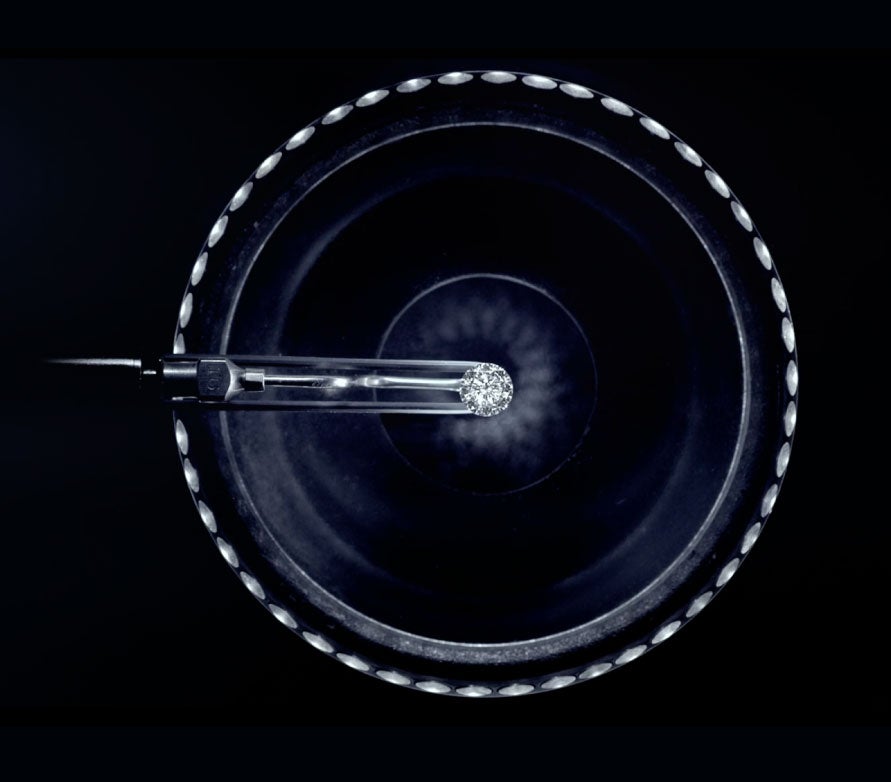 As for who’s the target consumer for the created diamonds that ALTR offers, Shah is happy to point toward just about every woman out there, given the value proposition that created diamonds offer. “Find me one girl or a lady in any country, in any culture, who would not want to wear a larger and a more beautiful diamond,” he says.

“I haven’t found one… And that is the core proposition. So, for the couple that gets engaged at 25, or the couple that’s celebrating their 25th anniversary, we are for both of them… Because at the end of the day, they all end up compromising on what they want, because it’s always the struggle between the pocket, and what she wants. And this offering changes that entire conversation. So, the world is our playground, and every one of them is a potential customer.”

From a business point of view, Shah explains that ALTR has been built vertically, wherein the company grows its own diamonds in its state-ofthe- art facilities, and then goes on to cut and polish them, and finally designs them into jewelry that is taken to its retail partners, which range from names like Helzberg Diamonds in the US, to W.KRUK in Poland. It should be clear here that Shah believes that the act of purchasing jewelry is something that should be an instore experience, and as such, he has been very insistent about getting the best of partners onboard to stand behind ALTR’s offerings.

As for marketing, Shah reiterates that since what ALTR offers is a concept that might be unfamiliar to the population at large, he and his team have made that a core part of their strategy to boost their traction in the jewelry arena. “Marketing in today’s world is not billboards; it’s education,” Shah says. “The education required for a consumer when you’re trying to sell them a cell phone is to tell them about the features, the warranties, and everything. But when it comes to jewelry, the store has always told customers what to do. And that’s what we changed. We have a training team, probably the only one of its kind in the industry, that goes to every single store that we deploy, to individually train the salespeople."

"Because I was very clear, if I tell the consumer what to do, they take two steps behind. But if I tell the consumer, you have a choice, let me educate you about it, and please feel free to Google it. They’ll say, okay, tell me more about this. This very clear stance has brought people to that point of saying, okay, you’re enabling me to make a decision, and that has been a big part [in growing ALTR’s reach].”

When it comes to the skepticism and criticism that created diamonds have received from people and bodies within the trade, Shah says that he is not too perturbed by it, as this is a hallmark of every industry that has got (or is being) disrupted. But Shah urges the diamond industry to also take a good, hard look at the state it is in today before railing against innovations that companies like ALTR are bringing to the market.

A report by Dubai Multi Commodities Center (DMCC) in November noted that the global diamond industry was at an inflection point, with “steadily decreasing prices, a decline in profitability, and restricted access to finance” placing the sector under severe strain. “Diamond jewelry, in general, has lost connect with the consumer,” Shah adds. “When you look at marketing today, look at how amazing the advertising by the travel industry is- look at airlines, look at travel. Look at what electronics is doing. Look at what luxury brands are doing, with clothing, or bags. But when you look at diamond marketing, there’s little to none. In the last 10 years, there’s really been no conversation. So, we’re losing consumers to these other luxury products.”

At the same time, Shah points out that the customer profile has also changed- something he believes that the diamond industry hasn’t caught on to. “The modern consumer is also a different consumer,” he says. “They’re not only looking for aspirational products- they’re looking at attainable products. Created diamonds became an opportunity to democratize this luxury, and this is the standard which we went to the marketplace. Today, while the first-generation leaderships in retail are presenting this choice to consumer, the next ones that are still on the fence are slowly starting to convert, because I always tell them: it’s very simple- if you don’t offer a choice to the consumer, tomorrow, you might not be the consumer’s choice.”

Entrepreneurship is a Game of Calculated Risk